Peter Gould and Vince Gilligan joined their cast to announce the final season of "Better Call Saul" and preview the penultimate season at the TCAs in Pasadena. 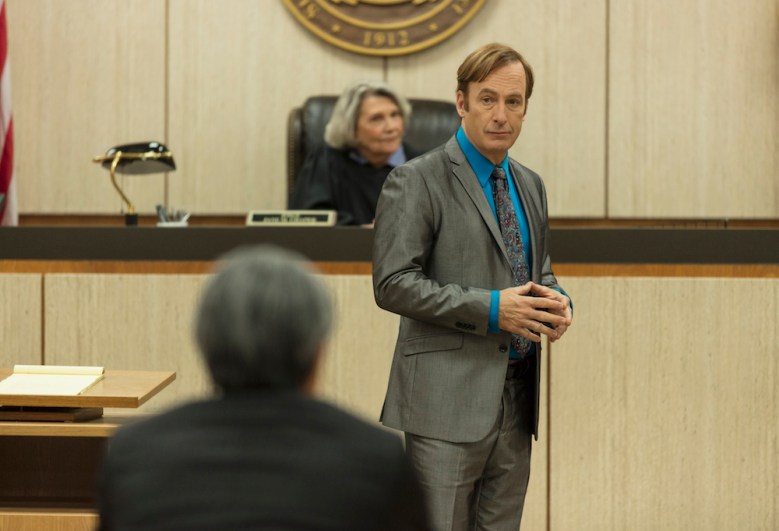 “Better Call Saul” will last exactly one episode longer than its predecessor. Showrunner and executive producer Peter Gould announced from the TCA stage that AMC had ordered a sixth and final season of the critical favorite. The 13-episode Season 6 will put “Better Call Saul’s” episode total at 63, whereas “Breaking Bad” ran for 62 award-winning episodes.

“When we started, what we wanted to do is tell the complete story. I’m happy to be able to say we’re going to be able to do that,” Gould said. “Thank God for AMC and Sony, we’ve been picked up for Season 6. […] It’s going to be 13 episodes, and I was so proud to be a part of ‘Breaking Bad’ because I felt that Vince [Gilligan] and the rest of us managed to stick the landing on those 62 episodes. And we’re going to try like hell to stick the landing on these 63 episodes.”

AMC is preparing to release Season 5 on February 23rd. The 2020 season will consist of 10 episodes, while the crew will begin working on Season 6 next month for a 2021 premiere.

A few spoilers were teased during the panel — including (seriously, this is a potential spoiler) the Season 5 return of Dean Norris’ Hank Schraeder and his partner Steven Gomez (played by Steven Michael Quezada) — and the producers even answered a question about what the ending might look like.

“How it ends, I would say, we didn’t have much of an idea either,” Gould said. “For the first four seasons, it was very foggy. During the breaking of Season 5, the fog started to lift. We started to see where it ends, and I have to say, none of it is where I expected when we started.”

“When this season is over, I think you’ll have a better understanding of where this is all going,” he added.

In a statement provided after the on-stage announcement, AMC president Sarah Barnett said, “Greenlighting a prequel to one of the most iconic series in television history is one of the boldest swings that AMC has ever taken. But, thanks to the creative genius of Vince Gilligan and Peter Gould, it has also been one of the most rewarding. It has been an absolute joy to collaborate with the extraordinarily talented team on ‘Better Call Saul,’ which — five seasons in — continues to deliver some of the best storytelling and most beautifully nuanced performances on television today. We congratulate Vince, Peter, our producers, writers and cast on a remarkable run and look forward to sharing this final chapter with fans.”

When asked if there were other spinoff possibilities, Vince Gilligan said he wasn’t planning on it.

“I think you can put too much hot fudge on the sundae, and I don’t want to do that,” Gilligan said. “I certainly don’t have any plans to keep the universe going after this wonderful series, ‘Better Call Saul,’ ends. […] I always caveat it with ‘never say never,’ but I would say at this moment in time, ‘probably not.’”

As for Season 5, Bob Odenkirk said things get kicked up a notch for his eponymous lawyer.

“I do feel like we go faster in Season 5. More happens. It’s a bigger season. The snowball is coming down the mountain and it’s breaking up,” Odenkirk said.

“Are we safe to say it gets a little more violent?” Jonathan Banks asked.

“I called Jonathan yesterday, he picked up the phone and said, ‘What, are you going to kill me again?’” Gould joked. “I’d say this season, where it goes, is a little more kinetic. There are scenes that are certainly as violent as anything we had on ‘Breaking Bad.’”

Gould added that Episode 8, which is directed by Gilligan, certainly hits that high mark, before announcing for the fifth — but not final — time that “Breaking Bad” favorites Walter White (Bryan Cranston) and Jesse Pinkman (Aaron Paul) will not be featured this year.

One more now-familiar figure making his “Better Call Saul” debut: Robert Forster. The recently deceased actor first appeared in “El Camino,” the “Breaking Bad” movie Gilligan made for Netflix and AMC, but the producers said he’ll be featured in an early scene from “Better Call Saul” Season 5, as well. There were no plans to see more of his character beyond that scene, and both creators expressed sorrow over the loss.

“He’s sorely missed,” Gilligan said. “He’s a wonderful actor, and I feel sorry for anyone who didn’t get to meet him — he was an absolute gentleman. I would’ve loved to work with him again in another show or another movie.”