TCA: An eclectic crime show full of roving zoo animals, and the show's cast is acutely aware of how strange it all seems. 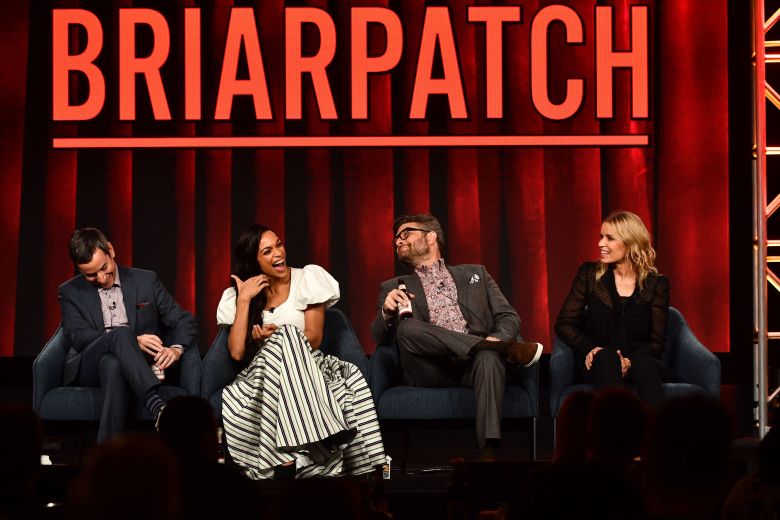 “Briarpatch” follows Allegra Drill (Rosario Dawson), who works to uncover her assassinated sister’s murderers. It’s a murder mystery — simple enough — but it’s also a show where giraffes, kangaroos, and other zoo animals roam the streets while an increasingly eccentric cadre of characters butt heads with the no-nonsense heroine. It’s pretty strange, and the “Briarpatch” cast is keenly aware of that.

“This is the town that will respond to something inexplicable and wild and maybe beautiful with brutality,” Greenwald said during the “Briarpatch” TCA panel.

A cursory glance at the anthology series series makes its violent and occasionally surreal influences clear. The show is unapologetically pulpy: The TCA trailer was full of giant, excitable yellow text that screams Quentin Tarantino; Dawson strides through gritty corridors and meets all manner of presumably unscrupulous individuals.

Although “Briarpatch” doesn’t lack for violence, Greenwald said he aimed to create a nuanced, character-driven series that offered a contemporary adaptation on the 1984 novel of the same name. For example, Dawson replaces the original novel’s male protagonist, and though the series’ plot still hinges on the “dead girl” trope, Dawson stressed that its characters were fully-fleshed out and subverted typical character stereotypes.

“It’s a learning experience for Allegra to have to come to terms with her culpability and what unfolded with her sister,” Dawson said. “I think everyone becomes a very well-rounded human being who is complex and nuanced. We don’t often get a chance to do that in a short-form story, but having the time to really make choices, make a conclusion and get answers to our questions was a compelling experience for my character.”

Although the series promises a variety of twists, turns, and deceit, Dawson added that the series tells a complete story and does not end on a cliffhanger.

Critics had the opportunity to review the show’s first two episodes several months ago; IndieWire’s Ben Travers praised the series’ eclectic blending of genres in his September review.