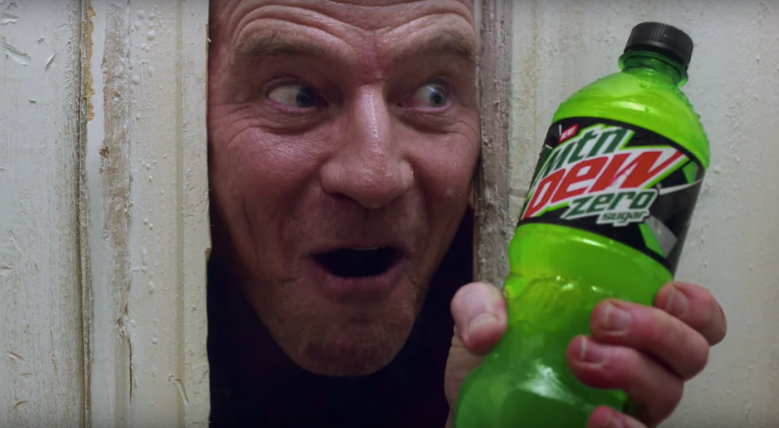 This is the reality we now face. Ever since Super Bowl commercials have become as big a draw as the game itself, there have always been copious nods to pop culture. Yet, 2020 is proving to continue a stronger, more recent tradition of not just nodding to the thing but recreating it beat-for-beat. The latest proof? A truly discomfiting Mountain Dew ad that finds venerated actor Bryan Cranston aping Jack Nicholson’s iconic rampage through the Overlook Hotel at the end of Stanley Kubrick’s “The Shining.”

It all plays out pretty much how you’d imagine that setup to unfold, right down to Cranston sticking his head through a crack in a door and delivering the product name with a deranged level of faux enthusiasm. Credit Mountain Dew for actually casting someone to play Wendy and not just lazily leaning on Shelley Duvall like so many other parodies have done over the years.

Here, Cranston is joined in this insane bit of weaponized nostalgia play by Tracee Ellis Ross, who swaps out Duvall’s horrified screams for… relative inconvenience? At least she seems to be having fun and not burdened with having to deliver the phrase “same refreshing taste” with the enthusiasm of someone ready to commit murder.

The whole thing is just a bizarre exercise, right down to the hyperactive, randomly capitalized and punctuated tweet previewing the ad, befitting of a soda brand whose central purpose is to make people who drink it feel like they’re constantly shouting. (Can only imagine the social media discussions that went into the decision of how many “e”s should be in Cranston’s version of “HEEEERE’S.”)

It all culminates with a green-liquid riff on the elevator of blood sequence from “The Shining” (one that already seemed to be at Peak Homage after turning up as an unforced surprise in one 2018 film and almost as a prerequisite in one 2019 film). This draining bit of corporate pandering does have one distinguishing feature: Cranston popping up for an unexpected double (triple?) role in the ad’s final frames.

This Mountain Dew-born monstrosity joins a list of Super Bowl ads that will surely grow by the day, alongside a Boston accent-heavy Hyundai commercial starring Chris Evans, Rachel Dratch, and John Krasinski that surfaced online on Monday.