TCA: A suite of new and returning shows are heading to CBS All Access soon, as the streaming service aims to release one tentpole each quarter. 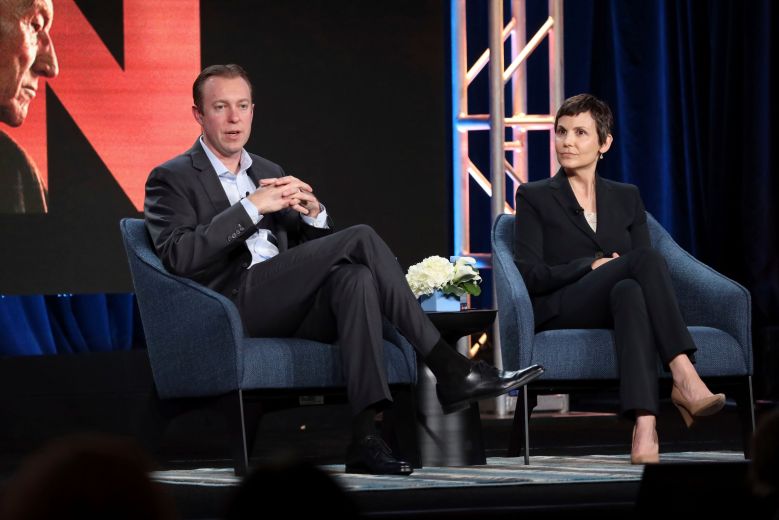 Marc DeBevoise, CBS Interactive’s CEO and president, and Julie McNamara, executive vice president of original content for the CBS All Access streaming service, shared details about a variety of upcoming CBS All Access projects during their TCA executive session in Pasadena Sunday afternoon.

“Tooning” is an animated political comedy series executive produced by Stephen Colbert, and will feature brief daily segments and a full weekly episode that mocks the news and will include interviews with real guests. The series’ trailer featured a snarky voiceover that poked fun at contemporary social and news topics; the shows within the show will range from “Virtue Signal,” where there’s “no cause this white lady can’t make about herself,” and “Inside The Hill,” where “rich people agree with each other.”

DeBevoise and McNamara’s executive session was focused on ViacomCBS’ CBS All Access streaming service, which the duo said has enjoyed strong growth in the increasingly competitive streaming market. There are more than 10 million subscribers between CBS All Access and the Showtime OTT service, according to DeBevoise and McNamara, who said originals were a key factor to the success of those platforms.

CBS All Access’ upcoming originals include the highly-anticipated “Star Trek: Picard,” which the duo said had been renewed for a second season; and the aforementioned Season 2 of “The Twilight Zone,” and the 10-part docuseries from Linklater (“Boyhood”).

Although “The Twilight Zone” has been a hit for CBS All Access and “Star Trek: Picard” is a highly-anticipated project, the company’s streaming service is still contending with a cutthroat market: Disney and Apple released their own streaming services late last year and WarnerMedia and NBCUniversal are gearing up to release HBO Max and Peacock, respectively, in the coming months. DeBevoise said CBS All Access would be well-positioned to stand out in the market thanks to its measured release strategy — CBS All Access will release one new show per month, including a tentpole each quarter — and its live content, which will include content from local CBS stations and sports like the UEFA Champions League, the latter of which will hit the streamer in 2021.

“The live component is unique, especially with how we get to use the CBS television network in an amazing way and also invest in other live content, “ DeBevoise said.

The duo’s other CBS All Access reveals included a trio of upcoming animated children’s series — new versions of “Lassie,” “George of the Jungle,” and “Mr. Magoo” — from DreamWorks Animation’s Classic Media that will debut on the streaming service on January 17. The upcoming series are part of the company’s recent push to get more family-friendly content on CBS All Access, which began streaming older shows such as “Bob the Builder,” “The Legend of Korra,” and “Inspector Gadget” in recent months.

The 2020 Winter Press Tour marked the first TCA for ViacomCBS; CBS and Viacom completed their long-awaited merger in December. Though DeBevoise and McNamara noted that CBS All Access leveraged content from both Viacom and CBS, they declined to offer further details on how the merger would impact the streaming service in the future.

This Article is related to: Television and tagged Animation, CBS All Access, Stephen Colbert, TCA, ViacomCBS