Sundance: Maimouna Doucouré's French-language feature debut has such a strong start, but it can't obscure a mystifying final act. 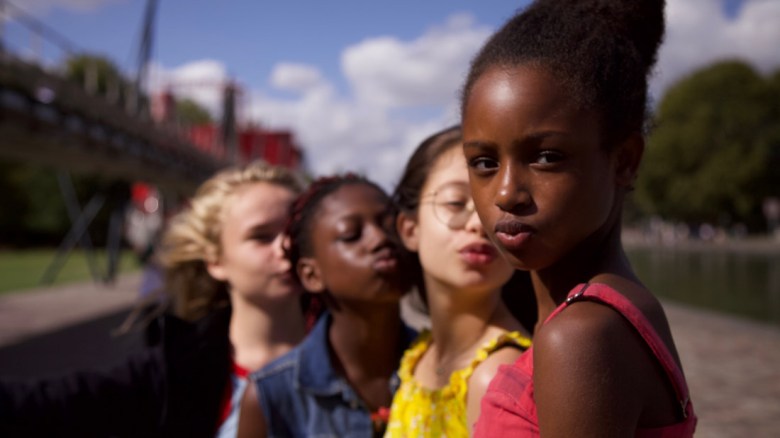 Eleven-year-old Amy (a revelatory Fathia Youssouf Abdillah) already has an eye for petty misdeeds before falling in with the titular “cuties” of Maimouna Doucouré’s feature debut. The sweet, gangly tween is no stranger to tiny acts of rebellion that both mystify and thrill her, as if even she can’t believe what she’s getting up to in the liminal space between childhood and adulthood. Sticky-fingered (a set of prayer beads here, a much-needed cell phone there) and hyper-observant, Amy doesn’t miss a trick, characteristics that not only set her apart from her family but also make her something of a curiosity at her local school. Recently moved into a bustling French apartment building and a dizzyingly busy middle school, Amy is in state of massive transition, and that’s before the physical demands of puberty start to infiltrate every inch of her body and mind.

Doucouré’s even-handed approach to the film’s grounded first half is what makes it so moving and relatable, and despite the specificity of Amy’s story — her family, culture, background, and the contemporary obsessions that enthrall her — there is a heartening universality to her troubles. “Cuties” may have plenty on its mind, but it’s also the kind of coming-of-age story that will make any adult viewer think back to their own tween years. You couldn’t pay most people to re-live all that; watching Amy endure it on screen is hard enough. (Despite the drama of her storyline, Doucouré has a real eye for visual humor: Amy sitting quietly during a prayer service, tucked inside her headscarves as she watches a twerking video while appearing to pray, and a sight gag centered on the outrageous number of onions she’s tasked with chopping in preparation for a feast.)

Originally from Senegal, Amy’s traditional lifestyle requires that she honor her parents — and eventually, her husband — by being meek and reserved, faithful and timid. And yet Amy’s familial unit has already started to break down, propelling them into uncharted space. In the absence of her father (resolved in the film’s first act through one hell of a heartbreaking revelation), Amy must honor her mother (a haunting Maïmouna Gueye) above all. Once that part of her life changes, the diversions pile up. There’s her growing femininity, her needy younger brother, and a new interest in pop music and dancing. And there, of course, are the Cuties.

The Cuties are a budding dance crew whose leader happens to live in Amy’s building. The intrigue is understandable: Where Amy is shy, they are bold, where she is modest, they’re brash. Doucouré and her young cast believably chart the girls’ fickle affections as Amy orbits their world, from their intense adoration to their terrible ability to bully each other.

Amy eventually wiggles her way into the group by way of her stolen cell phone, offering her services as a videographer for their dancing exploits. The girls are preparing to enter a dance contest, and an appearance by their great rivals (the Sweety-Swaggs) lays out what’s the come: The Swaggs are older, more developed, more sexualized, and their moves reflect that. The Cuties certainly don’t understand that even the elder Swaggs are at the mercy of a hyper-sexualized culture and its demands, and that there’s something deeply wrong with a teenager taking her top off in the middle of dance video. Soon enough, the Cuties are unfurling their own new routine led by Amy, who remains tuned in to what’s happening around her but not what it means.

The foursome does realize that there is something here beyond their reach — new best pal Angelica balks at a move that involves lasciviously sucking on her fingers and they all seem to think their butt-bumping is silly more than anything. The audience must endure their sexualization as increasingly horrified spectators. The girls vacillate between being hyper-interested in the opposite sex (the girls push Amy to videotape a cute boy in the bathroom) and being freaked out by its actual mechanics, as in a scene in which they discover a used condom. A group of initially interested teenage boys soon recoil in disgust (and fear?) when they realize how young the Cuties are. “They’re little girls,” one of them scoffs, as the tweens jostle and preen, desperate to prove otherwise.

As Amy more fully enters the world of womanhood, “Cuties” takes on a more mystical aspect, one that’s not always earned and never fits inside the very real space Doucouré carved out for her characters. It’s an uneasy merging of the grounded and the out-there that’s never fully realized and always distracting. (That Doucouré ends her film with a one-two punch of too-obvious symbolism and the film’s most fantastic sequence is, without spoiling the details, a tremendous letdown.) The eventual consequences Amy must face are believable, built around a coming-of-age trope of suddenly being forced to reckon with her two lives on the same day. However, Doucouré muddies them with magical realism that does little to advance the storyline or Amy’s evolving character.

Although Doucouré steeps “Cuties” in emotion and experience, she abandons its grace to make crazier gestures. “Cuties” doesn’t need sudden splotches of blood or a twist that turns Amy into, at best, a young criminal. Growing up is hard enough, and “Cuties” knows that — until it doesn’t.

“Cuties” premiered in the World Cinema Dramatic Competition section of the 2020 Sundance Film Festival. Netflix will release it in 2020.

This Article is related to: Film, Reviews and tagged Cuties, Reviews, Sundance