Former administration officials Ari Fleischer and Andrew Card appeared at the TCA panel for the documentary, which will be released this spring. 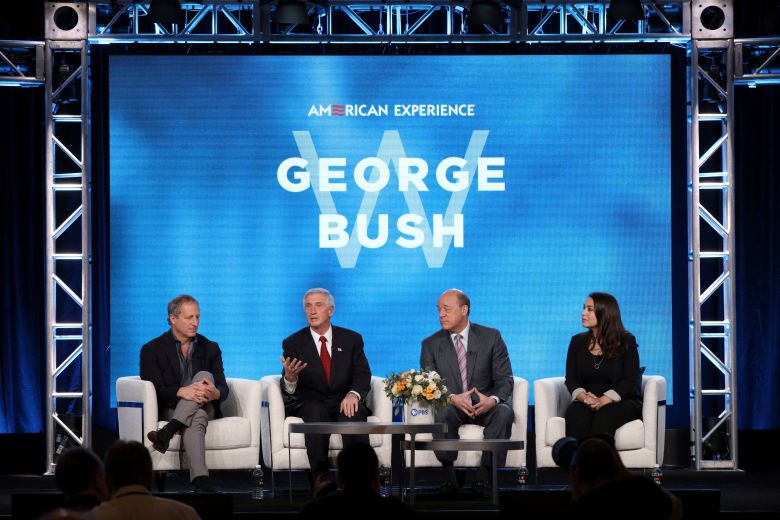 George W. Bush is the latest president to get the PBS documentary treatment. Former Bush administration officials Ari Fleischer and Andrew Card joined filmmakers Barak Goodman and Jamila Ephron for a panel at the Television Critics Association 2002 Winter Press Tour to discuss the latter duo’s upcoming two-part “W,” which will premiere sometime in the spring.

The first part of the documentary will focus on Bush’s unconventional road to the presidency — Bush is one of five individuals who became president despite losing the popular vote — while the second part will center on the president’s handling of the September 11 terrorist attacks, Hurricane Katrina, the Iraq War, and the 2008 financial crisis. The documentary features interviews with a variety of Bush administration officials, historians, and journalists.

The documentary’s trailer, which focused on the 9/11 tragedy and Bush’s immediate response, set the tone for a panel that largely glossed over Bush’s handling of the Iraq War and the 2008 financial crisis. Although Fleischer was among several Bush administration officials who collectively told hundreds of lies to drive the United States to the Iraq War, Goodman said that the project’s interviewees did not attempt to distort facts.

“The folks we talked to were extremely candid with us,” Goodman said during the TCA panel. “The folks who agreed to talk to us understand that they’re not there to spin and I think enough time has passed where folks want to tell history as it happened.”

The upcoming documentary is part of PBS’ American Experience series; Goodman and Ephron previously collaborated on  “Clinton,” which centered on President Bill Clinton. Goodman and Ephron noted that they extensively researched Bush’s presidency and used interviews with the president’s inner circle to understand how the administration chose to make its various decisions.

Fleischer and Card primarily discussed relaying news of the 9/11 tragedy to Bush as it was happening and also offered several humanizing anecdotes about the president, such as the importance of his Harvard education.

The TCA panel occurred several days after President Donald J. Trump’s administration assassinated Iran’s Qassem Soleimani, which has stoked fears of a renewed Middle Eastern conflict. Card offered his thoughts on the killing, noting that he had empathy and understood that presidents rely on their inner circle when making difficult political decisions.

“The greatest responsibility that any president has is the oath of office they take,” he said. “The reality is they take that oath, but it takes other people to help them keep it and George W. Bush is the best example of anyone I’ve ever met who understands the obligation of recognizing that other people made it possible for him to keep his oath of office.”