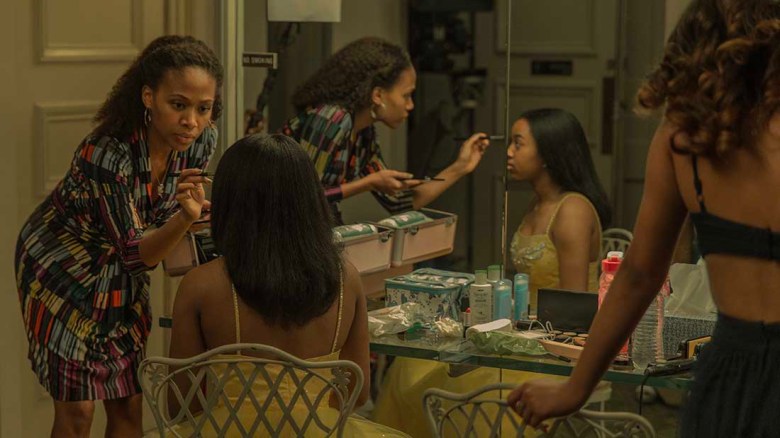 She never tries it on herself, but it seems likely that Turquoise Jones still fits into her Miss Juneteenth dress. She’s played by Nicole Beharie, once again in a star-making role after already doing just that in films like “Shame” and shows like “Sleepy Hollow.” Channing Godfrey Peoples’ debut feature “Miss Juneteenth” opens with Turquoise staring the yellow confection down, holding it up against her body, pondering her once-shiny crown. Since winning the scholarship pageant when she was just a teenager, named in honor and in memory of the day Texas slaves learned they were emancipated (two years after the rest of the country), Turquoise’s life hasn’t turned out the way she hoped. That’s not going to happen to her daughter Kai (Alexis Chikaeze), at least not if her mother has anything to say about it.

Kai, however, has different ideas about where her dreams might take her, and is instead consumed with a plan to join a local dance team. While the situation is specific, there’s a warm universality to the bond (and tensions) between Turquoise and Kai: Turq is old-school and believes in the staid lessons of the pageant (lots of counting salad forks, many discussions about the value of hard work), but Kai is a contemporary teenager bent on doing her own thing (and, as we learn early on, a thing she’s quite good at). “She my dream now,” Turquoise tells Kai’s dad, an obvious enough claim, but one that Beharie delivers with heartbreaking pathos.

“Miss Juneteenth” piles on the problems for Turquoise from the start — many of them rooted in money trouble. It seems as if even the striving Turq can never work hard enough to pay for the necessities, and that’s before the pageant starts asking for all manner of fees; ain’t that the American Dream? And these include man troubles, a constantly breaking-down truck, and lingering rumors from her life immediately after winning her pageant so many years ago. Life itself is messy and tough, but “Miss Juneteenth” finds its heart and humor in the best part of Turquoise’s life: Kai, no matter how rebellious and headstrong she might be. Beharie and Chikaeze dig through an increasingly convoluted, slow-moving plot to bring to life the film’s best and most beautiful bonds. They’re both outstanding here, and Peoples’ skill at casting and directing eye-opening stars is worthy of serious praise and attention.

Rife with vivid details, Peoples crafts an entire world for Turquoise, Kai, and their Ft. Worth community to inhabit, from the pair’s clean but lacking house to the scrappy BBQ joint where Turq works at just one of her jobs (the other is at a family-run mortuary, and that’s got drama to spare). Many of Peoples’ shots are gorgeously composed, from the pageant and the accompanying parade to one of many rowdy nights at the BBQ joint, bringing to loving life the kind of world not often brought to the big screen.

The same attention isn’t always paid to the film’s script, written by Peoples herself, which throws out compelling hints about various characters before pulling them back with little explanation. There’s clearly plenty going on under the surface for Turquoise (to say nothing of her mother, a character Peoples could build another entire film around), but “Miss Juneteenth” never fully explores her motivations and life experience beyond the basic narrative structure of the film. And despite the strong performances and meticulously crafted world they exist inside, the film’s narrative isn’t nearly revelatory enough to match its most winning elements.

While the film has a naturally built-in climax in the pageant, it lacks forward momentum, instead dipping into and out of Turquoise’s other complications as it chugs towards the film’s main event. Each and every scene with Baharie and Chikaeze is compelling, their chemistry natural and fresh, but other interactions grind “Miss Juneteenth” to a halt, and Peoples’ inclination toward drawn-out scenes and spread-thin sequences flattens the feature in key moments.

The pageant promises a reprieve, and Peoples subverts some of her more cliched narrative twists (it’s clear from the film’s first act how Kai’s all-important talent segment will play out, in the same way many films of the same stripe have done over the years) with a heartening conclusion. It’s one that hints at another, perhaps less heart-wrenching mother-daughter drama to come, a hopeful look toward a time when the American Dream won’t be so hard to come by, and where two of its most deserving stars have plenty to celebrate, even without a tarnished crown on their heads.

“Miss Juneteenth” premiered in the U.S. Dramatic Competition section of the 2020 Sundance Film Festival. It is currently seeking distribution.