The importance of connecting as families and friends to combat loneliness and fear is emphasized in five nominees, using stop-motion and 2D techniques. 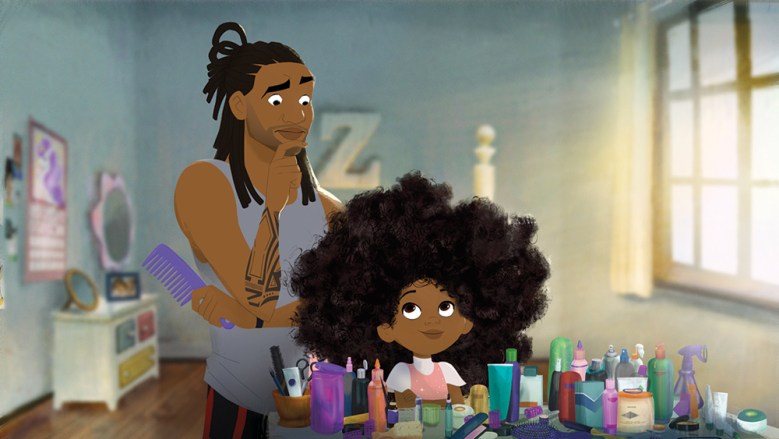 The Best Animated Shorts race is about the difficulty of connecting as families and friends. There are three stop-motion works (“Daughter,” “Memorable,” “Sister”), and two that are 2D (“Hair Love” and “Kitbull”). Three are directed by women — “Daughter’s” Daria Kashcheeva, “Kitbull’s” Rosana Sullivan, and “Sister’s” Siqi Song” — and “Hair Love” is directed by black filmmaker Matthew Cherry. All are very personal in tackling loneliness and fear and advancing animation to achieve intimate, abstract expressions.

“Hair Love,” the frontrunner, concerns a single black father trying to do his daughter’s hair for the first time. It was financed through Kickstarter, animated by Six Point Harness, and distributed by Sony Pictures Animation. Animation newbie Cherry (“BlacKkKlansman” executive producer) was intrigued about the trend of black dads doing their daughters’ hair on YouTube videos going viral. “I wanted to [turn around] those negative stereotypes of dads not being involved in their kids’ lives, and represent that mainstream, modern day family that exits right now,” he said.

With strong black industry support and nearly $300,000, it became the most highly-funded short film campaign in Kickstarter history. Cherry formed a directing team with animators Everett Downing Jr. (“Up,” “WALL·E”) and Bruce Smith (creator of “The Proud Family”). He also received help from Karen Rupert Toliver (executive vice president of creative at SPA), who became the short’s producer.

Cherry wanted to showcase the family dynamic over this father-daughter bonding, with 2D providing the contrast between the characters and the painterly backgrounds. He additionally emphasized the importance of expressing the joy of natural-looking hair, and that’s where the animation shined the most graphically during a hair fight. “It’s about the normalization of black hair,” Cherry added. “We have a touching story, but we were really trying to be very strategic in making sure the dad had natural hair and showing our diversity to normalize that… [and] young girls wearing their natural hair and seeing themselves as beautiful.”

“Kitbull” (from Pixar’s new experimental SparkShorts program), directed by story artist Sullivan (“Toy Story 4”), is a quirky short about the unlikely friendship between a kitten that lives in garbage cans and an abused pitbull in San Francisco’s Mission District. “I have a general passion for wanting to capture animal behavior in more nuanced than naturalistic ways,” Sullivan said. “It was a time that I was really stressed out on a project.” And she wanted to escape into drawing a cat, from the frenetic to being shy. Then she paired it with a pitbull, which could be powerful yet sweet. 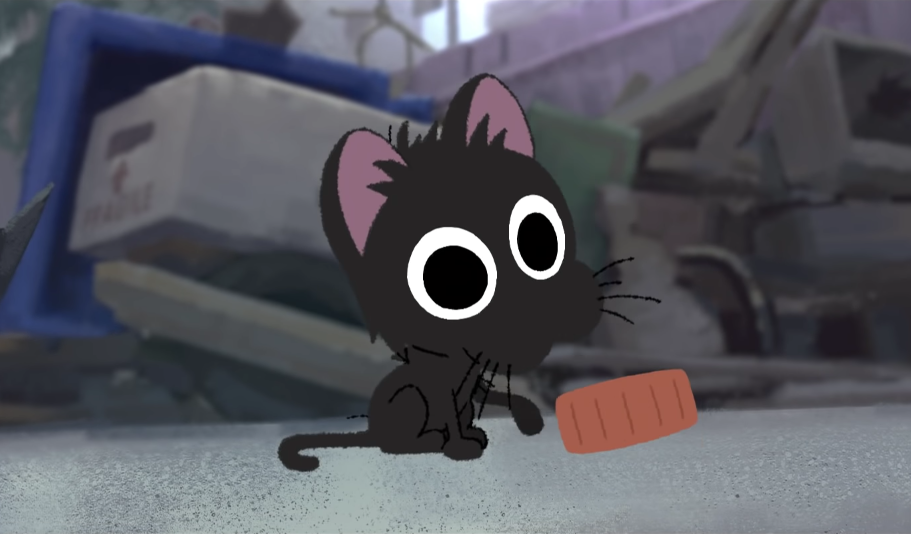 The short evolved into an intriguing cross between “Ernest & Celestine” and “My Neighbor Totoro,” as a series of contrasts: Impressionistic backgrounds set in harsh, rainy, San Francisco; the graphic sharpness of the kitten, and the round, softness of the pitbull. The cat eyes became Sullivan’s preoccupation: large, hypnotic, deep, dark pits that suck you in. “I really wanted to feature the cat eyes,” she added. “One, because, initially, the kitten was a black shriek of hair and spikes, almost like the sprites in the Ghibli films, and, two, I wanted to get as much emotion [as possible] out of those eyes.”

However, Macgyvering a pipeline at Pixar posed the biggest challenge. “We took out most of the CG aspect of the pipeline because we weren’t going to be modeling and rigging and animating characters in CG,” she said. “But we still wanted to use the editing software to cull the shots down…we did that with CG and that helped both the animators and background painters work in tandem, where as normally they work sequentially in CG, which saved us a lot of time.”

“Daughter,” from Kashcheeva of the Czech Republic, a former sound designer, is an acclaimed student film about an estranged daughter and father unable to communicate until he fights for his life in a hospital. “I was searching for answers to why I am the way I am,” she said. “While processing these childhood memories I found moments that really shook me, and, as I understood later, influenced my behavior. I discovered that parents sometimes can’t express their love for their child, even though they feel it inside. Or express it in such a way the child cannot understand. Sometimes there is estrangement.” 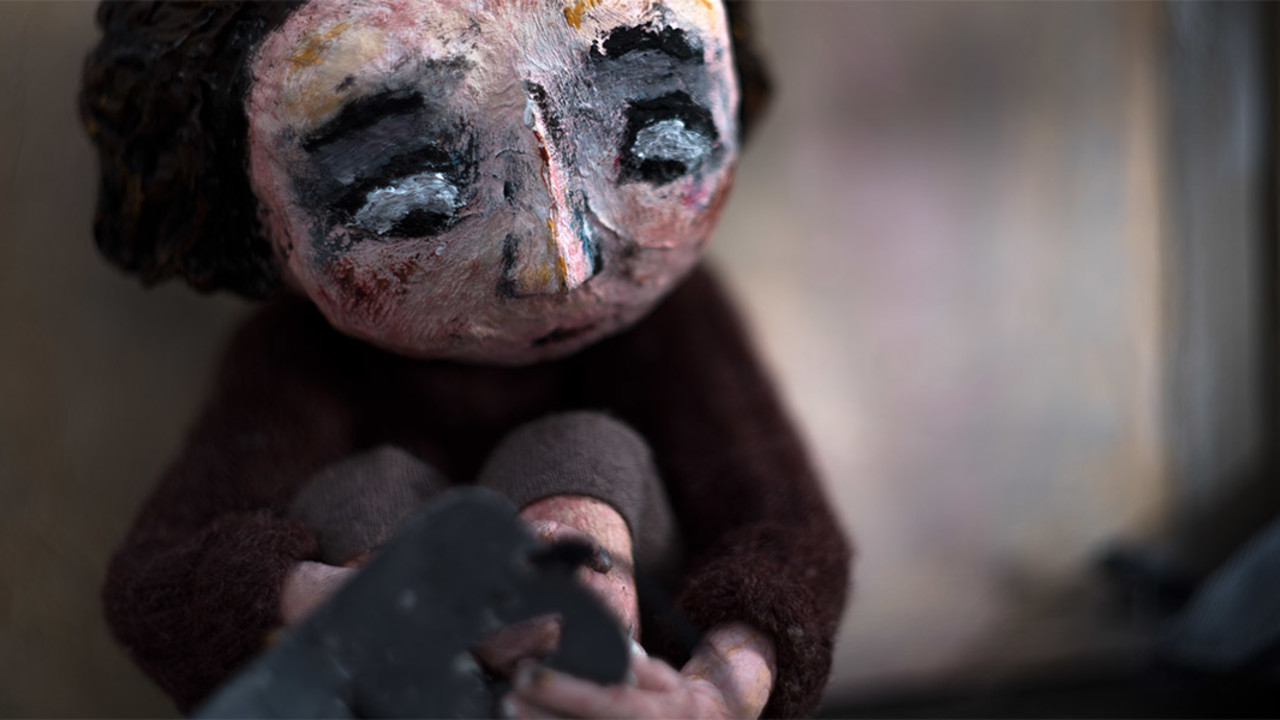 Kashcheeva keenly explored how those moments stay in children’s memories as scars, and the vicious cycle that ensues when they are unable to express their emotions as adults. Aesthetically, she was masterful in using stop-motion, paper-mache, and jittery hand-held camera (inspired by “Breaking the Waves”) to convey the fragility of life.

“I felt that for a film that should rouse emotions, paper and painting are the right choice,” she said. “I definitely felt that the eyes are very important for expressing the feelings of the characters. This also confirmed the choice of material for making the puppets. I decided to animate the movement of eyes by repainting them right on the face of the puppet. Even though it sounds crazy, I resolved to at least try it.”

In the French short, “Memorable,” Bruno Collet explores a painter struggling with Alzheimer’s creatively through stop-motion and its impact on remembering his wife and everything else around him. “Thanks to the work of William Utermohlen, I discovered the look that a painter suffering from Alzheimer’s can have on himself,” he said. “By continuing to portray themselves, despite the disease, the artist offers us the opportunity to slip into his head. I quickly realized that its growth was exponential. She seemed to choose her victims according to rules which are currently unknown to us. Whatever your social layer, your old profession, your life of excess or ascetic, this neurological degeneration can choose you and destroy your life.” 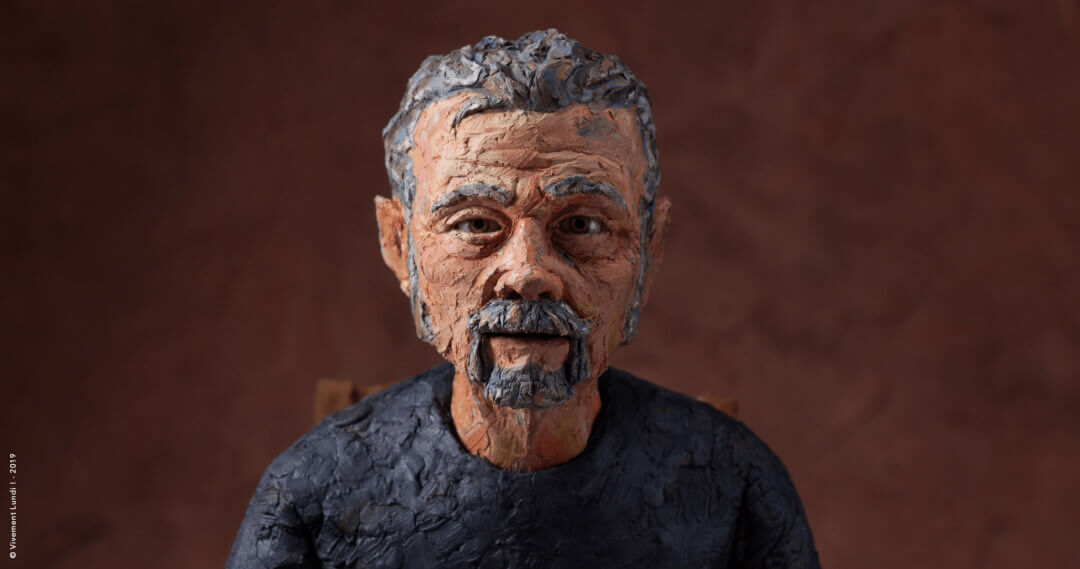 As a former fine arts graduate, Collet hit on the notion that memory of works of art during youth remain intact and rise to the surface when everyday life fades. “Van Gogh, Giacometti, Edward Hopper … the evocation of many great masters then dot the film, profoundly transforming the world in which Louis lives,” he added. “The cutting of the film was to surprise the viewer, to destabilize him in order to translate the feeling of loss of bearings felt by Louis. We are there, then suddenly elsewhere. Surrealist images, of course, help to translate this feeling, but Louis’ temporal ellipses and offbeat words are also important.”

Yet Collet didn’t want “Memorable” to merely be a movie about Alzheimer’s. It’s above all, a love story that links this couple for decades. “Their ‘separation’ was to be done in music, in an explosion of color, of Jackson Pollock painting,” he said.

With “Sister,” Song explores her upbringing under China’s controversial “one-child” policy in the ’90s with an inventive use of stop-motion designed with wool. It’s about a grown man looking back at his annoying little sister but with a surprising, bittersweet twist. “As a ‘little sister,’ myself, I was born as the second child at the height of China’s one-child policy. The narrator of this film, for example, told me his story of losing a younger sister when he was a four-year-old. He has always imagined how his life would be like if his sister was ever born. So I wanted to make this film to show what it is like to grow up with a sibling. More importantly, I also wanted to tell the story of the only children in our generation, who would’ve had a different life if their siblings were born. So this film is based on this group memory of growing up in the 1990s in China.” 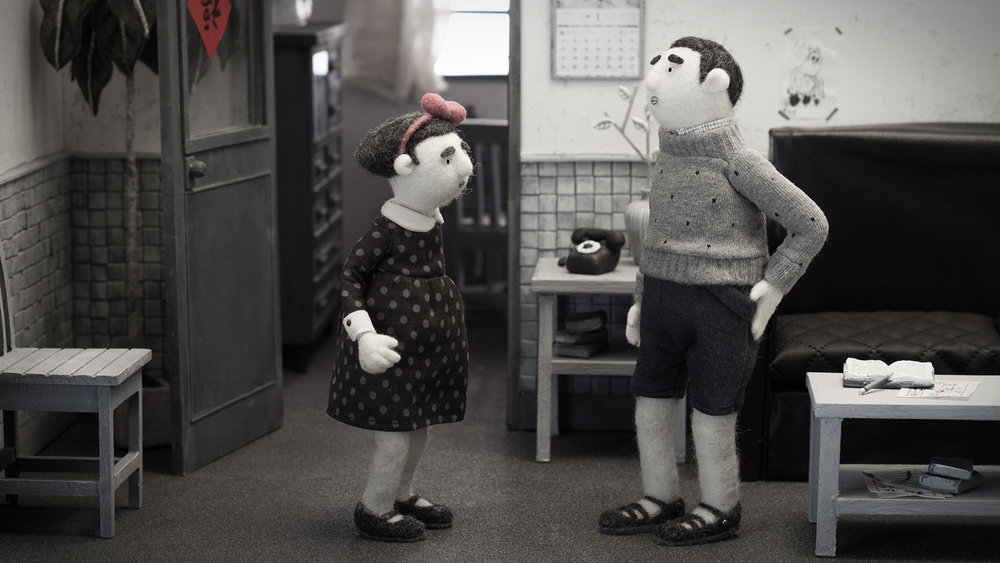 Song, who completed her student short after graduating from CalArts, cleverly used wool in a variety of ways, beginning with covering up the foam on her puppets as skin. “The wool material is very soft and delicate,” she said. “It can create imagery that conveys the theme of the film: family, childhood, and memories. The texture of the wool looks really nice in-camera, even though it was difficult to control during the animation process.

“In stop-motion animation, every element in the shot needs to keep consistency. But with felting, it’s impossible to keep everything still while animating. To solve this problem, I had to touch everything in every frame in order to keep the consistency of the movement. That’s why when you’re watching the film, you would feel like this wool texture is moving. That adds a lot of extra work, but it gave the puppets a more alive look, which gave the film a unique visual style that any other materials cannot achieve.”