Long, heartfelt speeches defined the annual event, which is known for its record of predicting Oscar nominees. 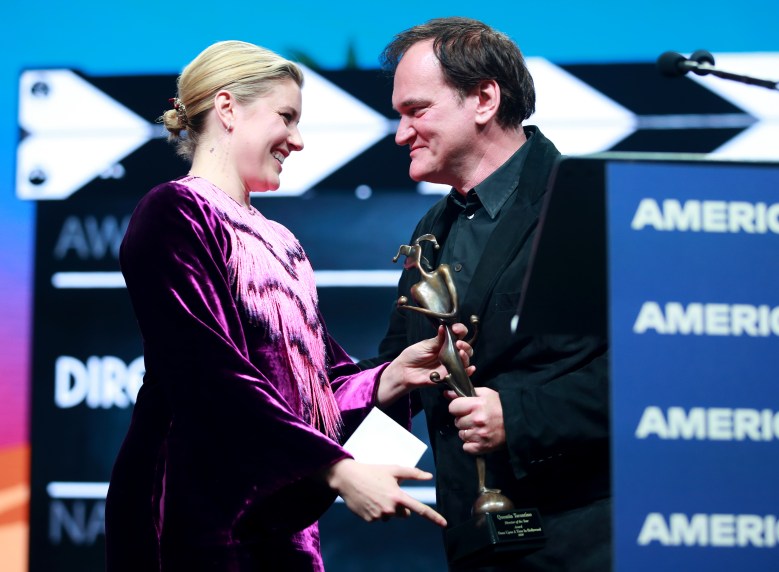 In presenting Quentin Tarantino with the Director of the Year award at the 31st Annual Palm Springs International Film Festival Film Awards Gala Thursday night, Greta Gerwig spoke about the profound impact the filmmaker has had on her life, from longingly staring at a video store copy of “Pulp Fiction” as a kid to choosing to shoot her “Little Women” on film, rather than digitally, in a nod to Tarantino’s own preference.

“Quentin Tarantino makes movies as if movies could save the world,” she said. “Movies can kill Hitler, free slaves, and give Sharon Tate one more summer … he makes movies like movies themselves matter, like they are both high art — which they are — and that they are populist art — which they are. They’re speaking the most profound truths to the biggest crowds with the bravado that comes with the confidence that collectively everybody will be changed for the better by the experience.”

After listening to Gerwig’s heartfelt six-minute introduction, a welled-up Tarantino said he was on the verge of tears.

“She literally said about me how I can only imagine somebody could ever talk about me in my wildest self-possessed dreams,” he said. “Thank you. I mean my god, thank you so much. I joke that when people are going to talk about me, I say, ‘Speak about me as if I were dead.’ And they never do. And you did!”

Tarantino, who was awarded for “Once Upon a Time in Hollywood,” was one of 12 honored Thursday. The gala, with attendance of some 2,500, raised nearly $2.5 million for the festival, according to its chairman Harold Matzner.

While the ceremony’s purpose is ostensibly to kick off the 12-day festival, the gala is watched closely for another reason: its sterling track record for predicting Oscar nominees.

The festival this year feted two best actor frontrunners, Adam Driver and Joaquin Phoenix, both of whom are also vying for that title at the Golden Globes on Sunday.

Driver received the Desert Palm Achievement Award for his performance of one half of a disintegrating couple in “Marriage Story.” Laura Dern, who plays a divorce attorney in the Noah Baumbach movie, presented Driver with the award.

“It’s beyond exciting to have your breath taken away when you get to know an actor’s work,” she said. “To feel truly in awe of them. Such happens when one is watching and working with the amazing Adam Driver.”

“Marriage Story” is Driver’s fourth collaboration with Baumbach; their earlier work together includes “Frances Ha.” The film represents the first time Baumbach has directed Dern, who received a Career Achievement Award from Baumbach.

Baumbach said he grew up watching and loving Dern’s movies, which prompted him to include a clip of her in “Blue Velvet” in his “The Squid and the Whale.” He wrote the “Marriage Story” character Nora for Dern as well as her monologue about imperfect fathers that references the Virgin Mary, but “it was Laura who very respectfully said might we add the line, ‘He didn’t even do the fucking’?”

A montage of Dern’s career performances was preceded by a clip of her parents, actors Diane Ladd and Bruce Dern, which Dern said she found quite appropriate and moving given the subject matter of “Marriage Story” — her parents are divorced and high-fived in the video.

Martin Scorsese, who received the Sonny Bono Visionary Award, used his speech to thank Netflix executives Ted Sarandos and Scott Stuber for helping realize his vision for “The Irishman,” which the streamer is distributing, and continue his recent musings on the state of cinema today.

While he’s excited by some recent movies, he said he’s also concerned. “Moviegoers are better defined today as movie watchers,” he said. “A lot of that movie watching now happens at home, that’s just the way it is. OK. Hence I feel its becoming more and more tailored toward a consumer experience because movies are slotted into consumer categories before they’re even given a chance to breathe — you’ve got the blockbuster understandably, you’ve got the independent OK, you’ve got the old, you’ve got new, you’ve got the auteur — which has become an elitist form, unfortunately, an elitist term.” He also expressed concerns about audiences’ reliance on algorithms to tell them what to watch, which he said takes away from “creative viewing.”

Quentin Tarantino, “Once Upon a Time in Hollywood,” Director of the Year

This Article is related to: Awards and tagged Marriage Story, Once Upon a Time in Hollywood, The Irishman