Sundance: A doc about Pepe the Frog's journey from chill dude to official hate symbol explores how nobody can own anything on the internet. 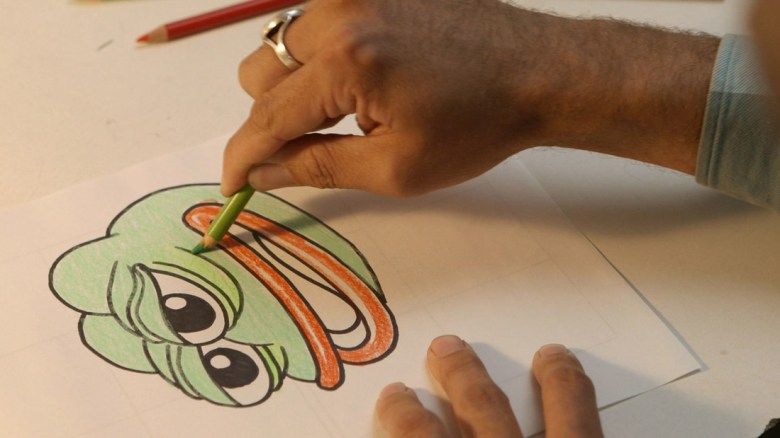 It took thousands of years for people to pervert the ancient Eurasian figure of the swastika (often used to symbolize good luck) into the world’s most notorious illustration of hate, and even the German nationalists who first co-opted it as an expression of Aryan power had to wait several decades before it was formally adopted by the Nazi Party. But it only took about 10 years for a harmless frog named Pepe to be radicalized into the internet’s default expression of nihilistic evil, and his actual transition from benign meme to alt-right icon happened much faster than that. And the sweet-natured San Francisco cartoonist who conceived Pepe had to sit there and watch it happen.

On its surface, Arthur Jones’ “Feels Good Man” is the sympathetic portrait of a man who created a monster, and then (eventually) took it upon himself to reclaim Pepe the Frog as an emblem of peace and love and peeing with your pants around your ankles. But underneath the lucid digital etymology that Jones energetically glues together from a zillion bits of internet detritus — and the warm snippets of original animation that he uses to show Pepe and his animal friends in a gentler light — is a documentary so much bigger than Matt Furie that it threatens to swallow him whole.

This isn’t just the definitive story of a perma-stoned frog who just likes to do what “feels good man,” it’s also an expansive forensic look at the life cycle of an idea, a warp-speed analysis of internet sociology, and a harrowingly modern fable about innocence lost. If the film can’t find a way to be all of those things at once, it’s still horrific and fascinating and maybe even a little bit hopeful to see how this strange world of ours has knotted them together.

Matt Furie wasn’t born to be the subject of a documentary, and he definitely isn’t the type you’d expect to find amid a fight between trolls, white nationalists, and the rest of the planet. A meek and quiet Mike White type who loves drawing frogs and longs for the guilelessness of childhood (“I basically just want to be young again,” he sighs when reflecting upon what’s happened), Furie is the sweet kind of guy who seems afraid of his own shadow.

He couldn’t believe it when one of the characters from the “Boys Club” comic he uploaded on MySpace went viral, as Pepe’s “feels good man” ethos caught on with everyone from body builders to NEETs. Pepe’s wrinkled face — a caricature of blissed out self-contentedness — soon caught up to his catchphrase when 4chan users adopted him as their unofficial mascot. His heavy eyelids and easygoing indifference resonated with a group of alienated outcasts who were alone together in search of a similar peace.

But when Pepe caught on with the “normies,” the 4chan community was furious this cartoon — the one thing over which they felt any kind of ownership — no longer belonged to them. That’s when Pepe became a Nazi. And a 9/11 hijacker. And Jihadi John. And anything else that might scare off the mainstream. That’s when he was adopted by the same people who rallied around mass shooters, and was frogmarched across the threshold that separates trolls and murderers.

It goes without saying that Trump supporters loved Pepe, and Pepe supporters loved Trump, but “Feels Good Man” is seldom better than when illustrating why this ugly, smirking little swamp creature was such a perfect avatar for our bush-league despot. One of Jones’ well-selected talking-head interviewees cuts right through the ironic remove that gives both icons their dark power: “Trolls want to make you feel scared, and then they want you to look stupid for feeling scared.” It’s hard to challenge an enemy that feeds on your frustration, and only grows stronger every time you try to punch back.

While Jones mostly paints Furie as a docile figure who focused on his family and moped around his studio instead of fighting back, brief stretches of the film show the futility of trying to put the tube back in the toothpaste; a sequence that follows Furie on a kind of Pepe redemption tour is as half-hearted as the cartoonist’s various attempts to wrestle back some canonical control over the character. “Killing” Pepe in a comic book was never going to stem the forces that were desperate for that frog to become a martyr, and have already located him as the prophet of an entire “religion” (if you aren’t familiar with the Cult of Kek, stay that way). Pepe even has his own cryptocurrency, a phenomenon that Jones adroitly explores from a distance. The rabbit hole is bottomless, and the film always stops itself from digging deeper than the light can reach. By the time the Anti-Defamation League classifies Pepe as a hate symbol, all you really have to know is that the frog’s legacy is as tough to undo as the Pepe tattoo that Furie’s roommate got on his arm before things went bad.

But if tattoos can’t easily be erased, they can nevertheless be altered over time, and “Feels Good Man” tries to ferret out how ideas in the public consciousness might operate by the same principle. Furie is only able to get Pepe back in some way when he realizes that his super chill frog no longer belongs to him — once he submits to the eternal cycles of light and dark. The film twists Furie’s victorious lawsuit against Alex Jones into the stuff of absurd comedy, but for the most part it succeeds in the more personal ways that its subject does; one particularly touching scene toward the end shows how Furie was able to share Pepe with his young daughter in spite of everything else.

And while “Feels Good Man” is stretched a bit too thin to really pierce what it feels like to sit there and watch the world corrupt your art (“The Wind Rises” this is not), Furie’s general powerlessness is endemic to this story in ways that have nothing to do with his personality. There’s only so much anyone in his position could’ve done, but Jones’ entertaining documentary also hints at how open-source ideation cuts both ways. If it’s true that nobody owns anything on the internet, that means nobody owns anything on the internet — not Matt Furie, and not the trolls who took Pepe away from him.

“Feels Good Man” premiered at the 2020 Sundance Film Festival in the U.S. Documentary Competition. It is currently seeking U.S. distribution.