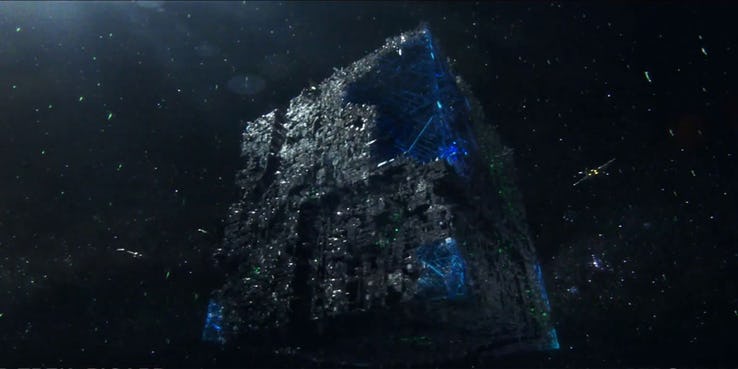 Romulan refugees appear to be rebuilding a Borg cube in “Star Trek: Picard.”

[Editor’s Note: The following article contains many spoilers for the first episode of CBS All Access’ new series, “Star Trek: Picard.” If you read further without having seen the show, resistance is futile.]

It’s been a little over 17 years since we last saw Jean-Luc Picard in action, in “Star Trek: Nemesis.” You would be forgiven for forgetting much of the plot of that lackluster film, which bombed at the Christmas box office in 2002 (beaten handily by “Maid in Manhattan” — yay, JLo!) But it is practically required viewing for getting the most out of “Star Trek: Picard,” Patrick Stewart’s return to the captain’s chair. The premiere episode of the new CBS All Access series links up almost seamlessly with the ending of “Nemesis,” as the lilting strains of “Blue Skies” come wafting through the cosmos. That’s an easter egg, and a delightful one for fans (more on that later), but easter eggs aside, there are wholesale plot points in this first episode, titled “Remembrance,” that might fly over your head if you haven’t been obsessively rewatching the good captain’s previous adventures.

Starting with that ending.

“Remembrance” concludes at a “Romulan Reclamation Site” — presumably a glorified refugee camp in space for all the Romulans who were able to get off their homeworld in time before it exploded (as seen in J.J. Abrams’ 2009 “Star Trek” film). It’s here we meet Soji (Isa Briones), the twin sister of Dahj, the flesh-and-blood android who sought Picard’s help, and was killed by Romulan assassins. Why did these pointy-eared bad guys want Dahj dead when it appears other Romulans are just fine with her android sister? Presumably, those assassin Romulans must be from a different sect than those seen at the Reclamation Site. And perhaps they’re upset about what it is exactly that those other Romulans and Soji are doing there at that space outpost.

Why? Because in the final shot of the episode, the camera zooms through the outpost’s superstructure until you get a dramatic reveal of its exterior: it’s a Borg Cube! Or at least one that’s being rebuilt.

This might come as a headscratcher if you’re new to Star Trek in general, because, well, the Borg aren’t even referenced by name at all in “Remembrance” — it just expects you to know what a Borg Cube is. They’re the mostly unstoppable ships of the Swedish-sounding cyborg collective that goes around the galaxy and “assimilates” any useful beings it encounters into its collective: robbing them of all individuality just so they can apply their skills to serve the greater whole. And the Borg are a fusion of flesh-and-blood and robot technology kind of like less sophisticated versions of Dahj and Soji.

What are Romulan refugees doing on a Borg cube?

“Picard” itself has given us no answers so far, but we have enough to start piecing it together. The Federation has become increasingly isolationist, even refusing to send a rescue armada to help save the lives of hundreds of millions of Romulans during the supernova incident. Some Romulans, like Picard’s caretakers at his chateau in LaBarre, France, clearly venerate him for his efforts. Others maybe are willing to do whatever they can, use whatever technology they can get ahold of, and make even the most questionable allies, in order to survive. The Romulans at that reclamation site, perhaps with Soji’s help, are clearly trying to use Borg technology to survive.

This has been hinted at in ancillary Trek media in the past. The comic “Star Trek: Countdown” tried to bridge the gap between “Nemesis” and the 2009 “Star Trek” film and hinted that some Romulans were using Borg technology to try to survive. The latter film’s villain, Nero, is said to have incorporated Borg tech into his creepy freighter, the Nerada, to make it virtually unbeatable in space combat. Could Nero actually be a part of this refugee group with Soji?

Why are the Borg allowing their tech to be used by others?

We still don’t have a definitive answer about this, but perhaps it’s because they’re barely around any longer? In the series finale of “Star Trek: Voyager,” Captain Janeway (Kate Mulgrew) sent a virus through the entire Borg network, seemingly destroying the collective and committing genocide on an unfathomable scale. (It was a Col. Kurtz-like Janeway from the future who did this, not the Janeway in the present, so you can still feel good about the actual Janeway if she should ever pop up on this show.) 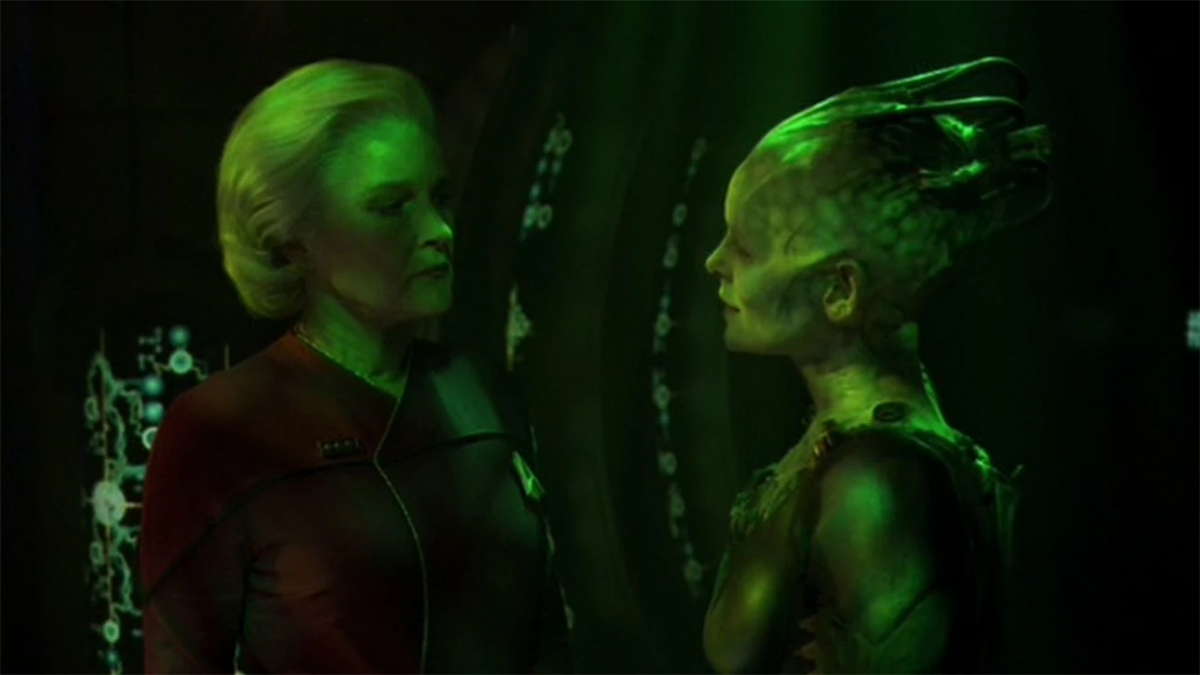 A Kathryn Janeway from the future has a possibly genocidal showdown with the Borg Queen (Alice Krige) in the series finale of “Star Trek: Voyager.”

It seemed like the Borg were done for good. Maybe that’s why they’re not interfering with these Romulans’ attempts at rebuilding a cube for their own purposes – they’re simply not around anymore.

But what happens when this cube is complete and activated?

Maybe the Borg could make a return, and maybe that’s why some of those Romulans seemed so hellbent to stop Dahj, who had weird “programming” that activated and turned her into an unstoppable killing machine.

Who was that Data-like droid disassembled and in a drawer?

That was B-4, the not-nearly-as-sophisticated predecessor to Data that Data’s creator built originally. He was recovered on a desert planet in “Star Trek: Nemesis” — in a sequence so horribly overexposed with its bright, bright lighting it should have been considered unusable footage — and reactivated by Data himself. Data later sacrifices himself to save Picard, and Jean-Luc clearly still mourns him even almost 20 years later. But “Nemesis” gave us a little bit of hope that seems unfulfilled so far: that film suggested Data may have downloaded himself into B-4 before he “died” because B-4 suddenly starts singing “Blue Skies,” which Data himself had crooned at Riker and Troi’s wedding earlier in the film. (A fave moment of that weird wedding: a hungover Worf groaning, “Ugh, Irving Berlin.”) That’s why this new series literally opens with the sweet sound of “Blue Skies.” But so far, it seems like Data really is dead, unless he can be revived somehow because of something to do with his daughters. Well, daughter, now that Dahj is dead.

Oh yes. In one of the most moving episodes of “Star Trek: The Next Generation,” Season 3’s “The Offspring,” the very first episode directed by Jonathan Frakes, Data created his own android. It was something he could do only based on his own template (which, if that’s why he created Dahj and Soji, they literally could bring Data back to life because they share his exact template for an artificially intelligent consciousness), and the result was Lal (from the Hindi word for “beloved”). 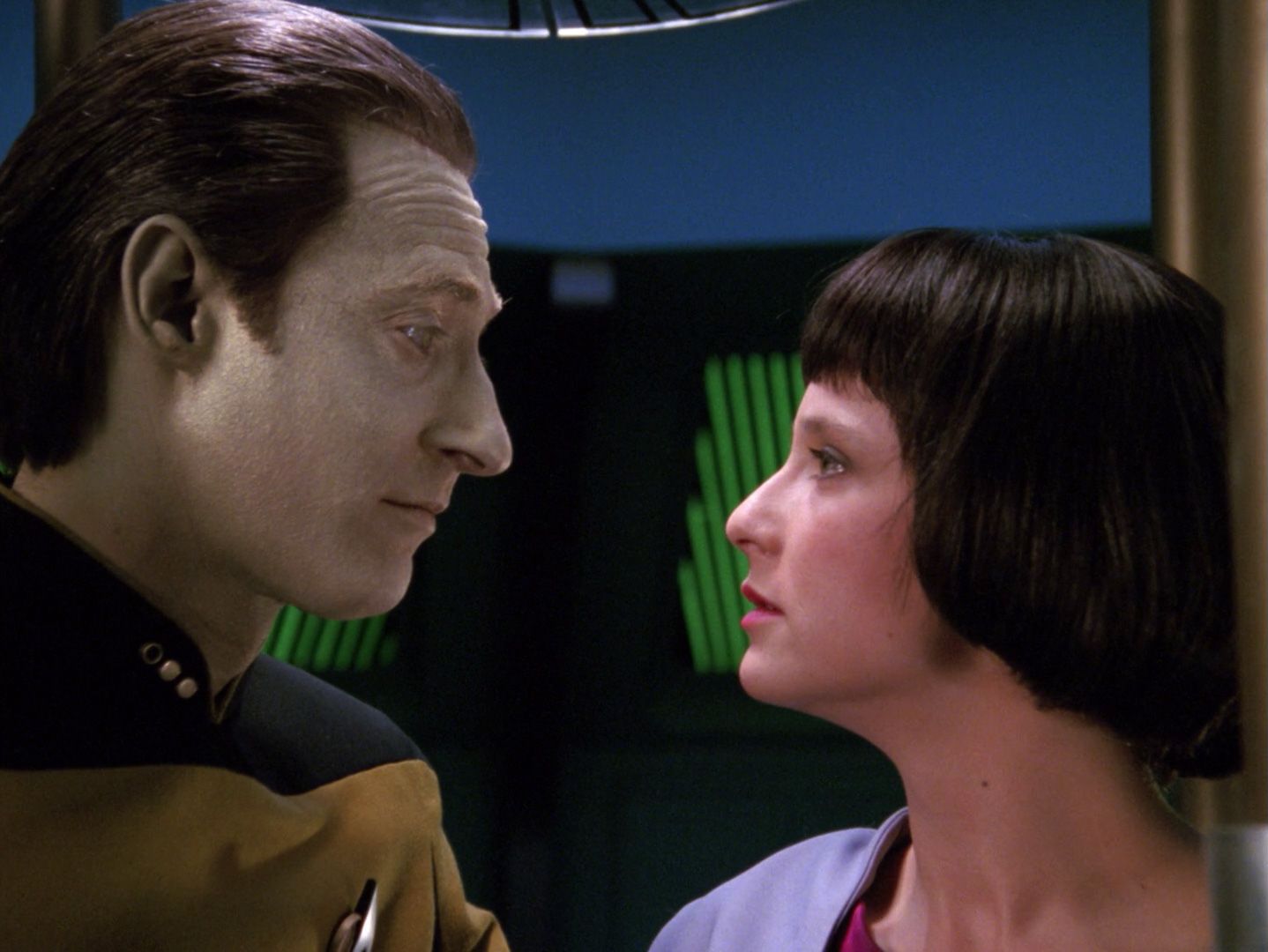 Data with his daughter Lal (Hallie Todd) in the “Next Generation” episode “The Offspring.”

He let Lal choose their own gender, species, appearance — the works. And she ultimately chose to appear as a human female in her 20s. But Data’s process of basing Lal’s consciousness on his own positronic matrix was flawed and she died. Clearly, though, he did not give up on perfecting the process.

Was Data really into painting?

He was indeed. It was one of things that made him feel closer to achieving his dream of being more human, though he’d rather rigidly say things like “I have now entered my Expressionist phase,” which may not indicate the most organic artistic development. 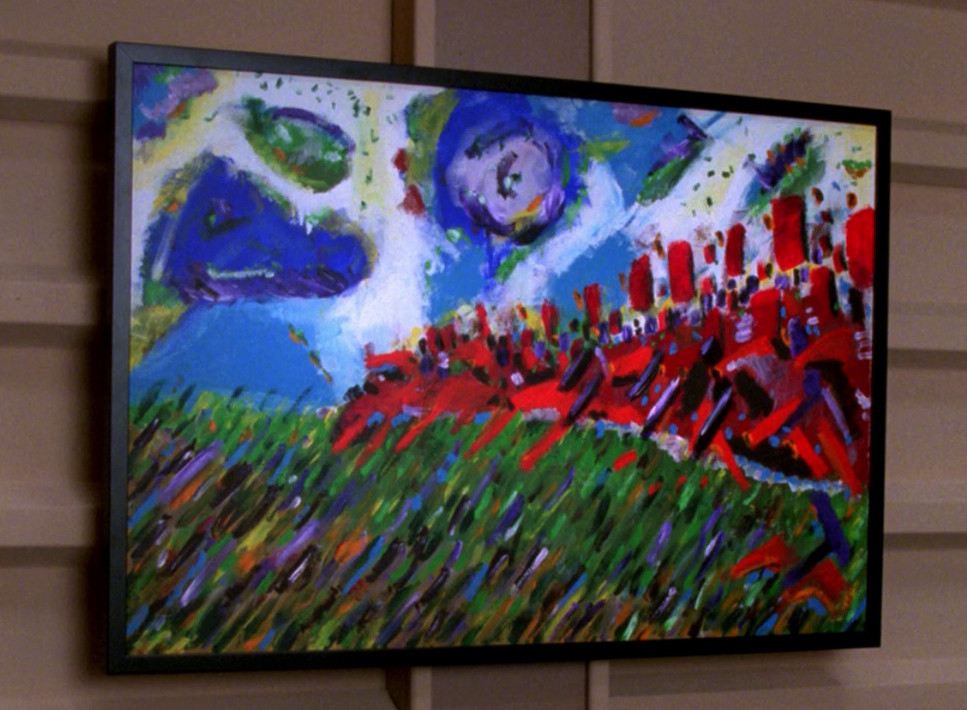 An example of Data’s Expressionist phase, a rendering of the Klingon Battle of HarOs.

Head spinning like you’ve just drunk a little too much Romulan ale? You’re not alone. “Remembrance” was an exposition-packed episode, like the show is just clearing its throat before the story and the action and the excitement really can begin. A galaxy of possibilities awaits.