Just two weeks ago, Gervais came under fire again for transphobic rhetoric after a series of tweets originally directed toward a satirical Twitter account. 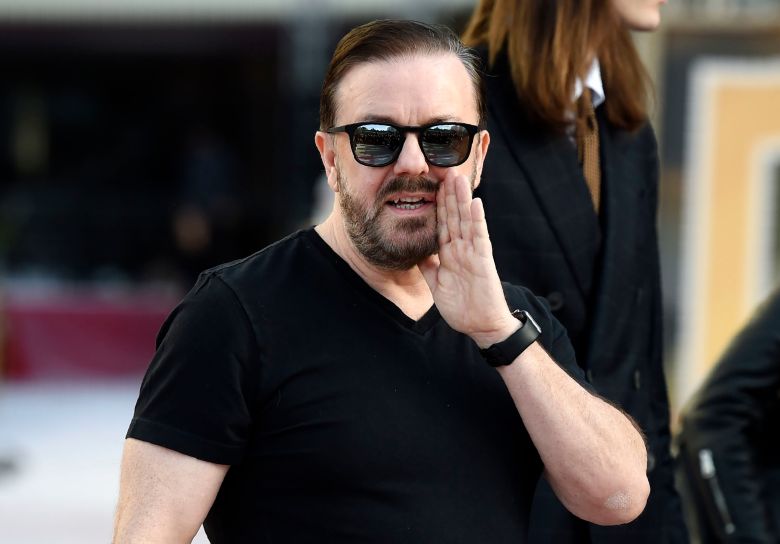 On Sunday, January 5, British comedian-actor-director Ricky Gervais returns to a place he knows well: the hosting position of the Golden Globes. But since that news was announced back in November, Gervais has also returned to another place he knows quite well: under scrutiny for his transphobic remarks.

Just two weeks ago, Gervais came under fire again for transphobic rhetoric after a series of tweets originally directed toward satirical Twitter account Jarvis Dupont (in the wake of the J.K. Rowling transphobia controversy). “We need to protect the rights of women,” Gervais wrote in one of his tweets. “Not erode them because some men have found a new cunning way to dominate and demonise an entire sex.”

Exactly. We need to protect the rights of women. Not erode them because some men have found a new cunning way to dominate and demonise an entire sex.

Gervais capped the tweetstorm off by saying, “But if I’ve said anything transphobic you should report me. Twitter has rules in place to guard against that sort of vile bigotry. My account will be closed down and you’ll be proved right and will have saved millions of lives. Why aren’t you doing this?”

In an interview with The Hollywood Reporter, Gervais set the record straight about this recent series of tweets — which featured replies to other Twitter accounts, not just the Jarvis Dupont account — explaining that he was just “taking the piss out of Jarvis Dupont.”

“Jarvis Dupont is a spoof Twitter account, and the joke is that he’s so woke that he’s actually gone full circle and does terrible things,” Gervais told THR. “And his latest [bit] is, ‘I’m trans now.’ And he gets all that wrong. And I responded by playing along with him, saying, ‘Oh, you’re so much better than biological women because they’ve had a lifetime to get used to it.’ Now, people saw my tweet and they thought he’s a real trans person, but I’m taking the piss out of Jarvis Dupont, who is actually a woman in real life.”

Gervais continued, “And this is the problem. You can say, ‘Listen, I was joking. It’s a joke.’ But that’s not always enough for people. They go, ‘Well, why were you joking?’ Also, add to that the nature of Twitter — it’s so curt, there’s no nuance, it’s there forever out of context.”

Ah, you’ve confused a joke tweet to a spoof account with my true feelings. But to answer your question I have nothing against anyone looking after their mental health. Be well 😇

This is not the first time Gervais has pointed toward “It’s a joke.” as his defense for transphobic comments. IndieWire’s Libby Hill chronicled Gervais’ history of such comments, from his 2016 Golden Globes comments about Caitlyn Jenner to his 2018 Netflix stand-up comedy special “Humanity,” in which he claimed he was telling multiple Jenner jokes from that Golden Globes appearance that he’d considered too offensive to tell. “I didn’t do it, so you’re getting offended at a joke that doesn’t exist.”

Gervais also tweeted back in October, “I don’t try to offend, but the more people are offended by a joke, particularly on twitter, the funnier I find it.”

I don’t try to offend, but the more people are offended by a joke, particularly on twitter, the funnier I find it. And the angrier the tweet, the more chance of me using it and turning it to laughs and cash. PC culture isn’t killing comedy. It’s driving it. As it always did 🙏

This Article is related to: Television and tagged Golden Globes, Ricky Gervais