The actors were honored with the Santa Barbara International Film Festival’s Virtuosos Award on Saturday night. 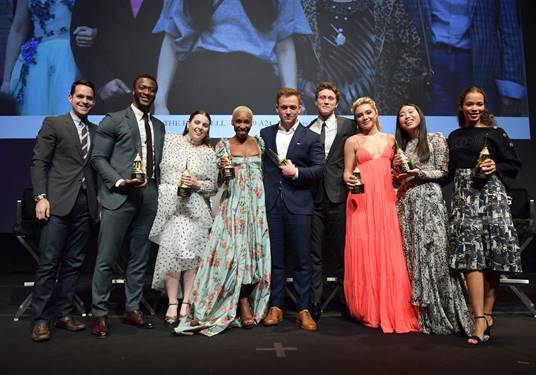 Eight actors were honored for their breakout roles in film with the Santa Barbara International Film Festival’s (SBIFF) Virtuosos Award event held at the historic Arlington Theatre on Saturday night. The annual award is presented to “up-and-coming” actors with noteworthy performances in film.

This year’s award recipients were Awkwafina for her first dramatic leading role in the dramedy “The Farewell”; Taron Egerton as Elton John in the biopic “Rocketman”; Cynthia Erivo, also in a biopic, playing Harriet Tubman in “Harriet”; Beanie Feldstein as the valedictorian of her high school class in the comedy “Booksmart”; Aldis Hodge for his role as a death row inmate in the drama “Clemency”; George MacKay for his performance in the World War I drama “1917”; Florence Pugh for her work in both the coming-of-age period drama “Little Women” as well as the folk horror film “Midsommar”; and Taylor Russell as a shy teenager in a family dealing with loss in “Waves.”

The tribute, held at the historic Arlington Theatre in Santa Barbara, was moderated by Turner Classic Movies host Dave Karger, who engaged in one-on-one discussions with each of the night’s honorees.

The final portion of the program was a crowd-pleaser, as Karger brought out all eight honorees for a panel discussion. The audience got a special treat when each honoree was asked what their go-to karaoke song was, which then escalated to some of them breaking out into song on stage.

Other topics of discussion included favorite movies of all time, dream roles, and the films that surprised them the most this year.

Following the panel discussion, actor Christopher Lloyd presented each honoree with their award. The evening concluded as the group of actors laughed and mingled in a VIP after party.

Of the group of SBIFF honorees, Erivo is nominated for the Best Actress Oscar for her performance in “Harriet”; and Florence Pugh is nominated for Best Supporting Actress for “Little Women.”

Watch the full 24 minute video below: