OK, but let me tell you how people felt about "Parasite." 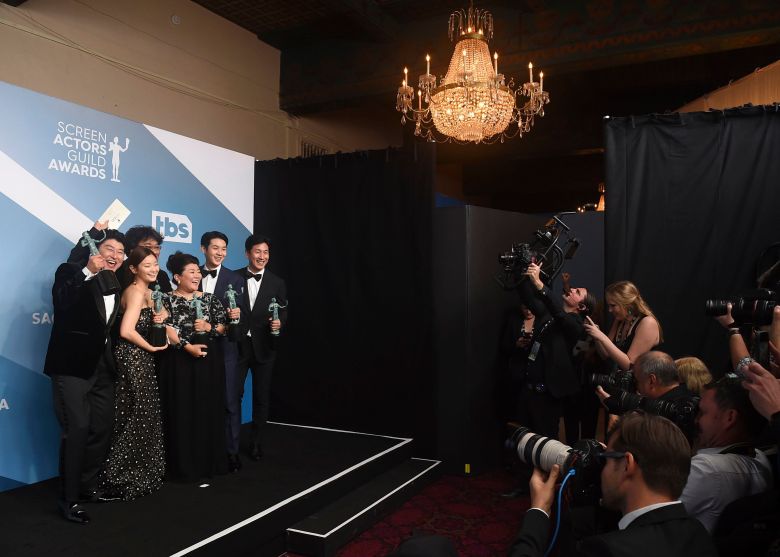 The Screen Actors Guild Awards packed a lot of bang for your buck into a ceremony that lasted just over two hours, but what would you say if I told you that some of the best moments of the evening happened just outside the purview of broadcast TV?

Lest you lose sleep over all those hidden (uncut) gems, trust that the best of the best have been assembled here for your perusal.

In the moments before the ceremony began, SAG-AFTRA Foundation President Courtney B. Vance took the stage to stump for support for a new initiative to raise $1.5 million for the organization. The foundation is a philanthropic non-profit dedicated to providing emergency assistance to members of the guild, in addition to programs aimed at aiding the public at large, including an award-winning children’s literacy program.

Central to Vance’s impassioned pitch was the announcement that in order to kickstart the campaign, Marilyn and Jeffrey Katzenberg had promised a matching $250,000 donation. To take full advantage of the Katzenbergs’ generous offer, Vance encouraged all of the 250 nominated actors at the ceremony to donate $1,000, even going so far as to put his money where his mouth was, pulling out his own donation check for good measure.

Later, Vance and Katzenberg (co-founder of DreamWorks — and Quibi!) arrived backstage to speak to the importance the foundation serves for the community at large, looking for all intents and purposes like an unlikely buddy cop pairing on your mom’s favorite summer TNT series. Jokes aside, Katzenberg shared a nugget of philanthropic philosophy worth hearing: “You haven’t learned how to live if you haven’t learned how to give.”

One of the more delightful aspects of the evening was hearing the night’s in-room announcer Melissa Disney go a little off book when trying to herd (likely) intoxicated actors like so many cats during commercial breaks.

As the moments ticked by and it became increasingly clear that the show would run over its allotted two hours, the announcer advised the ballroom mind the countdown clock, adding she was “pretty sure you can see it” in the flat sarcastic tone of a parent trying fruitlessly to get their children in the car to go to school.

She also advised winners to start speaking as soon as the designated speaker reached the microphone. “If you haven’t yet chosen someone, now might be a good time for that,” she deadpanned. 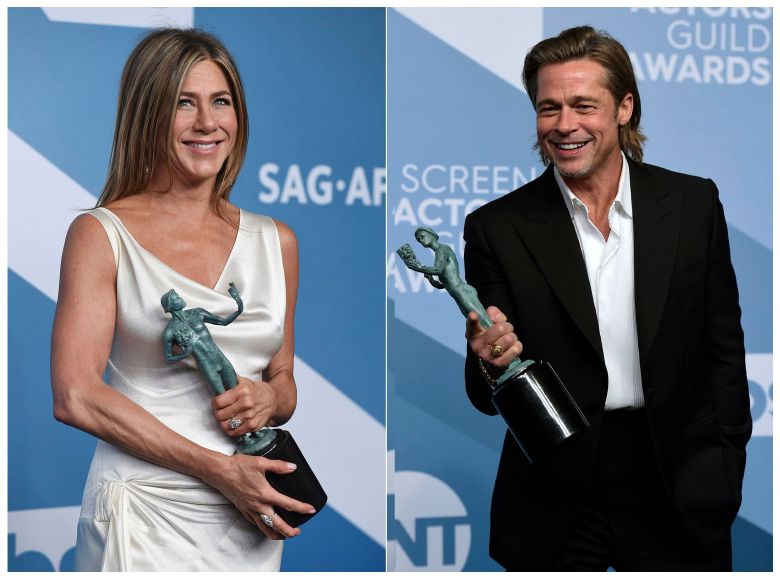 Yes, you saw longtime exes Jennifer Aniston and Brad Pitt win SAG Awards, but what you didn’t see is that they ran into each other backstage.

It’s weird if this information is exciting to you. You may be too invested in these people.

Refined thespian, inspired dancer, and lifelong vegan Joaquin Phoenix can add another feather to his cap: influencer. Earlier this month, the Hollywood Foreign Press Association opted to go with exclusively vegan options for food at the Golden Globes, and the Screen Actors Guild decided to follow suit.

While both organizations cited ecological issues for their decisions — climate change for the former and sustainable practices for the latter — it seems fair to say that the best actor front-runner came into consideration at some point.

It’s easy to forget that entertainment journalists often fall into their careers by way of their obsessions with, well, entertainment. And while it’s cool not to care for the most part, especially when everyone is hard at work in the media room for an awards show, the facade broke down entirely when “Parasite” won best ensemble. Whether it was because people were pleased or surprised or just happy that the Best Picture race isn’t a done deal, the reaction was pure.