"The Crown" and "The Marvelous Mrs. Maisel" made Emmy moves, while SAG bid farewell to "Fleabag." 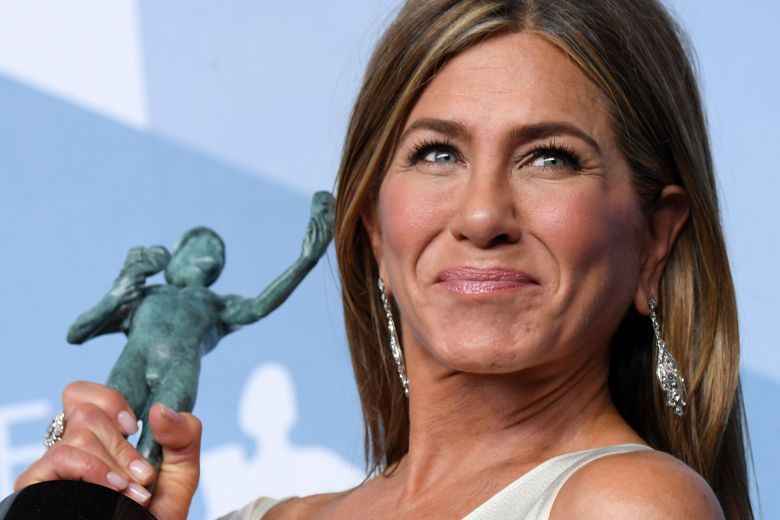 After a weekend chock full of Hollywood fetes, the Screen Actors Guild Awards hit Sunday night like a breath of fresh air, and not only because the ceremony was just a smidge over two hours long. While none of the TV winners had the verve of the “Parasite” ensemble win on the film side, it still provided fodder to chew on during the long, dark months until the Emmys.

Gathering as they do at the Shrine Auditorium in Los Angeles, the winners selected by the members of SAG-AFTRA were a soothing blend of predictable and predictably unpredictable, disseminated in a ceremony that had the loose feel of hanging out with work colleagues when you’ve all had three too many drinks.

Far and away the biggest winner of the evening was Jennifer Aniston, who became the first lead to strike awards gold for Apple TV+ prestige player “The Morning Show.” (Sorry Billy Crudup. Please enjoy your Critics’ Choice Award for supporting actor.)

It was the second SAG win for Aniston, who won her first in 1996 with the ensemble cast of “Friends” at the second ever SAG ceremony. The actress earned nine additional nominations between then and now, suggesting she was a mite overdue.

So yes, Aniston scored big with her peers, where she often does pretty well, but it’s important that “The Morning Show” found a fan base somewhere within the industry if it wants to keep its Emmy hopes alive — and the actors are as good a place to start as any.

As for Aniston, she told reporters backstage that she feared it was too late for her to play Wonder Woman, but had plenty of other ideas in mind for the future. “I feel like I’m just kicking into a creative stride,” she said, “That I just discovered a new love of this that I didn’t know I had before.”

Another SAG favorite was also honored for his good work, with Sam Rockwell taking home the Actor for his lead performance in FX’s limited series “Fosse/Verdon.” It’s the third win for Rockwell out of six overall nominations and something of an upset over Emmy-winner Jharrel Jerome (“When They See Us”). The award was the first Rockwell has won, despite several nominations, for his role depicting theater legend Bob Fosse.

Less surprising was another win by the actor’s “Fosse/Verdon” co-star Michelle Williams, who has assembled nearly every accolade possible for her turn as stage icon Gwen Verdon to Rockwell’s Fosse. While Williams didn’t make another of her stellar speeches advocating for equal pay and women’s reproductive rights, she did drop an inspirational pearl backstage after winning her award.

“Be true to yourself,” Williams said when asked what advice she had for young people. “Follow the instincts and the urges that arise uniquely inside of you.”

As happened at nearly every awards show for the last six months, the actors also took time to express their appreciation for the wonder that is Phoebe Waller-Bridge for her performance on Amazon Prime Video’s “Fleabag,” who upset last year’s winner Rachel Brosnahan, star of Amazon Prime Video’s “The Marvelous Mrs. Maisel.”

Also readying itself for a strong showing when Emmy season begins is Netflix’s “The Crown,” which triumphed in drama ensemble, the first time the series has won the award, despite two previous nominations.

And if you were worried about HBO’s “Game of Thrones” getting the cold shoulder from actors on its way out the door, fear not. Making it a clean sweep for the whole of its run, the fantasy series won its eighth SAG Award for stunt ensemble. As if that weren’t enough, Peter Dinklage finally won the Actor for his turn as Tyrion Lannister — and it only took a dozen or so nominations to get the job done.

Looking ahead, HBO’s “Succession” still holds the edge as the winter awards season nears its end, with “The Crown” holding its own. In comedy, it’s anybody’s game, so long as anybody is named “Maisel.”