It's hard to top this marriage proposal, which ambitiously blended fiction and reality, animation and live-action, in Massachusetts. 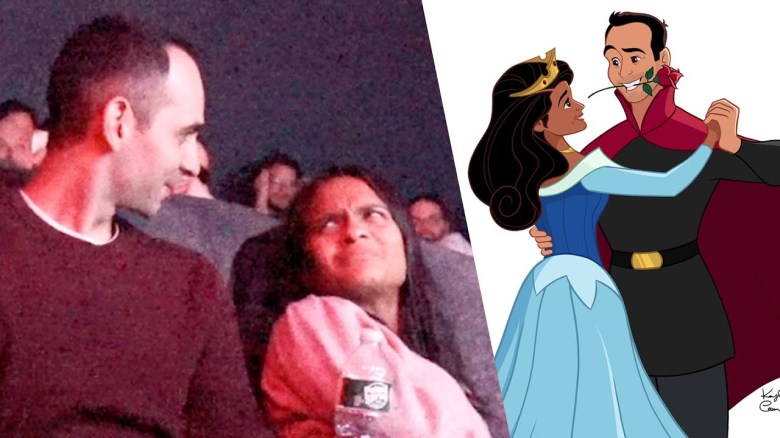 Anyone can go on bended knee, but Boston filmmaker Lee Loechler rewrote the idea of the marriage proposal when he ingeniously hacked his girlfriend’s favorite movie, Disney’s animated “Sleeping Beauty,” to ask for her hand.

The fourth-stunt broke the fourth wall with its unique blending of animation and reality: Loechler literally animated his girlfriend into the movie, and had the film’s Prince Charming appear to toss him a ring from inside the screen itself. Today, Loechler shared the video on YouTube. See below.

“It’s not every day you get to propose to your High School sweetheart,” Loechler wrote on YouTube. “For the past six months, I’ve been working with an illustrator to animate my girlfriend and myself into her favorite movie, ‘Sleeping Beauty.’ On 12/30/19 I popped the question in a theater filled with our friends and family.”

The ambitious proposal involved Loechler mounting a screening of “Sleeping Beauty” at the Coolidge Screening Room in Brookline, Mass. The video was shared by the Art House Convergence on Thursday, which in an email said, “On December 30, a young man rented the Coolidge Screening Room for a surprise proposal to his girlfriend. ‘Sleeping Beauty’ is her favorite film, so he hired someone to animate a fake ending where they become the main characters and his onscreen character tosses a ring for him to ‘catch’ in real life. He went to great lengths to make this seem like a real screening, even making fake movie tickets (so the girlfriend actually unwittingly invited HIM to her own proposal), and got strangers from Reddit to show up so it wouldn’t just be her family in the room.”

The proposal is already melting the hearts of many a Redditor. Loechler pulled it off without a hint of anxiety, and nary a technical hitch. “The only thing better than seeing the smartest person I know completely dumbfounded was knowing we’d get to live happily ever after together,” Loechler wrote on Instagram. Here’s the clip.