This week’s “SNL” saw Adam Driver ring in the New Year for the sketch comedy institution, proving just how funny he is one more time. 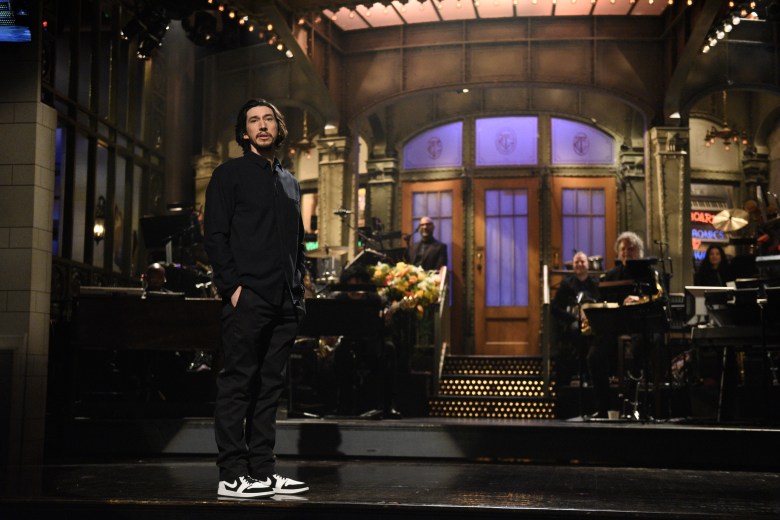 Adam Driver no doubt a talented actor, but as he’s proven with his previous hosting stints on “Saturday Night Live,” he’s also a pretty funny dude. (Sure, he’s proven that in his films too, but live sketch comedy is a little different, you dig?) The combination of that talented actor thing — as he’s currently nominated for the Best Actor Oscar for “Marriage Story” — and the “SNL” writers giving him weird things to do makes for an especially funny combination each time he’s hosted.

The best sign of the New Year for “SNL” is that its first monologue of 2020 is an original one. Not a singing monologue, no “audience” Q&As, no cast participation. Just Adam Driver — you know, “Adam from ‘Girls’” and “Kylo Ren from the space one” — proving that, unlike the characters he plays, he’s chill. Chill enough to finally notice the subway set for “SNL” (“I can’t take the train, I’d get mobbed.”), chill enough to explain that he’s really bad at smiling (“I look like a kidnapped person trying to send a message with my eyes.”), chill enough to interact with the fans (“Hey man, you look like a ‘Star Wars’ fan — no offense”).

And, of course, chill enough to stall to make sure a particular sketch (“I can’t tell if it’s really transphobic or just really dated.”) is cut for time. Considering how the show ends after Halsey’s second performance, it really seems like his plan worked.

With the release of “Star Wars: The Rise of Skywalker” and Driver hosting, “SNL” had to do a sequel to its original Kylo Ren “Undercover Boss” sketch. And the sequel did not disappoint, with Driver’s Ren as Randy the intern, who has now “learned” phrases like “Okay, boomer.” It’s also impressive that an “SNL” sketch addresses just how monstrous Ren is as well as it does. The moment where he befriends Chloe Fineman’s character — who is the victim of sexism in the workplace — and then kills her when she tells him she wants “to fly like Luke Skywalker” and not Kylo Ren is so simultaneously chilling and hilarious, to the point that it makes the “Okay, boomer” callback hit even harder. (“And now you’ll die like him too. Okay, boomer?”)

With “Slow,” Adam Driver brings back that “Inside Llewyn Davis” lower register, only lower. And slower. Kenan Thompson and Chris Redd collaborating in a pre-taped sketch is always a treat, and this R&B slow jam is no exception. Especially the slower and slower everything gets (until they finally get down to business).

The Mark Harmon/”NCIS” runner, Kate McKinnon’s Megan not understanding how periods work (or at least, should work), her repartee with Adam Driver as “the hot dad.” This sketch is some of McKinnon’s best work in awhile, as well as a sketch that just keeps elevating before ending with a literal bang.

Obviously, “SNL” would want to do a “Marriage Story” riff, and — thankfully — instead, we got a marriage story based on the simple concept of “marrying” the ketchups at a diner. This could’ve been lame. Instead, this sketch, in all its melodramatic glory, literally had the live audience gasp at a line like: “Unlike some people, he doesn’t need me to slap him in the back just so he can perform.” All of the condiment puns were delightful, and both Driver and Cecily Strong committed to the bit in a way that had the audience eating out the palms of their hands, despite such an absurd premise.

This is another one of those cases where “worst” sketch is more like “weakest” sketch than actively bad. “Cheerleading Show” (where the show is Netflix’s “Cheer,” as it even says) is a good sketch for everyone involved to play around, and Driver plays well off of Heidi Gardner. But the sketch has nowhere to go, complete with an ending that doesn’t really help all that came before it.

This is definitely more of an “all hands — except for Pete Davidson — on deck” episode of “SNL,” which is great, as it doesn’t tend to feature one performer dominating the show. But Kate McKinnon and Cecily Strong both deserve to be singled out for this episode. For McKinnon, it’s such a joy for her to return from the break not doing the characters we see over and over again. Instead, there’s freshness with her as the Devil in the cold open and then — in what especially makes her an MVP of this episode — as Megan in “Sleepover.”

For Strong, her performance in “Marrying Ketchups” is the epitome of committing to the bit, even more than Driver, who commits to that bit hard. In this sequel to “Science Show,” Strong provided the most consistent laughs.

Sometimes, it’s a sign of a weak episode when someone other than a cast member is the top performer. But in this episode, Driver’s excellence is truly an example of how the cast and the material simply elevated and highlighted him as a host, as opposed to him simply shining in spite of it all.

For example, Driver’s smallest part in the episode is the “Del Taco Shoot,” a simple sketch that understands how funny repetition is. His character (the VP of Branding for Del Taco) is strange from the moment he’s introduced, but the sketch doesn’t even go into it all, instead zagging to the “Aww man, I’m all outta cash” bit that is the central focus. And yet, when Driver gets involved to recite the line and bully Kyle Mooney’s Douglas, he is all in. So weird. So great.

And “Medieval Times” is great for its meta commentary on method actors being jerks — even at the lowest possible level — again allowing Driver to just go for it.

This week’s Weekend Update featured two of the worst things about the Colin Jost and Michael Che era of Weekend Update: Jost immediately undercutting any joke at his expense and Che’s apathy, despite being co-head writer of a show that at least pretends to care about the political climate of the United States. Che’s apathy and intentional ignorance is just the way it is, but Jost undercutting jokes is an actual problem that can and should be changed. (Kind of like Che’s reaction when a joke bombs, but again, with Che, that’s just the way it is.)

This issue is specifically in Melissa Villaseñor’s Oscars feature on Update, when Jost tells the “Joker” joke (that he watches it every day while he works out) and then the one about “The Irishman” (which he watched alone on Christmas day). Jost makes a face that basically says, “I can’t believe I said that line.” It’s “SNL” — everyone says stupid lines for the sake of comedy, and they don’t mug about how stupid it is after the fact. Except for Jost, whose reaction really wants people to know the line isn’t true. Weekend Update anchors don’t have to act as characters the same way their cast-mates do — and that’s even the joke when it comes to Jost’s Pete Buttigieg — but being a Weekend Update anchor still requires a performance. Making faces that call out how stupid a line you said is or reacting after a joke bombs does not good performance make; it’s just sabotaging the whole segment.

Now, if the rest of the season follows the outline/blueprint of this episode, this will be a very good season. The show returns from winter break with a celebrity cameo (Jon Lovitz, getting the “WOO!” reaction from the crowd) in a cold open that plays to the entire cast’s strengths, not just Lovitz’s. On the Adam Driver front, “SNL” has been good to him all three times he’s hosted, but this third time has been, perhaps, the most consistent at understanding what works for him. He isn’t this super intense guy — he’s just an actor who loves to play characters and will commit to any role, no matter how weird or specific.

One question about the cold open though: At any point, did anyone involved question why Hell is more populated with living visitors than it is actual dead people? Because Driver’s Jeffrey Epstein was the only actual dead person.