A talky, technobabble-filled installment offers a few revelations, but little action — laying bare the limitations of this serialized format. 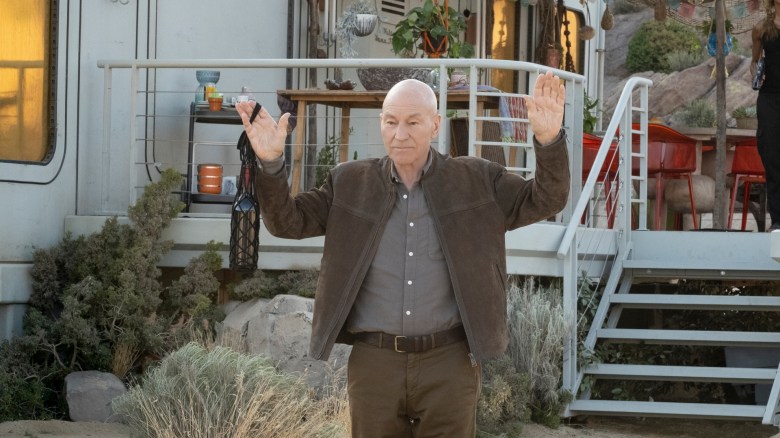 Picard has to look outside a Brexit-y Starfleet for help in “Maps and Legends.”

When is “Star Trek: Picard” going to start?

Yes, we’re two episodes into the new CBS All Access series, but most of what’s unfolded so far feels like elaborate table setting for adventures to come. The question is, how much longer is this table setting going to last?

Episode 2, titled “Maps and Legends,” is merely a continuation of the premiere installment. It’s a serialized show, of course, so that’s to be expected. But together these two episodes are like the “Issue 0” of a comic-book run: a prologue, rather than the adventure itself.

This is where showrunner Michael Chabon’s literary background is both a blessing and a curse: In his script with Akiva Goldsman for “Maps and Legends,” there is a novelistic richness of character, for certain, but also an over-emphasis on dialogue that you can visualize working on the page — but, veering between exposition dumps and hyperbolically emotional outbursts, never quite survive the jump to the screen.

Yes, we’ve only seen 90 minutes of “Picard” at this point, but that feels like enough time to establish what exactly this show will be, since it’s clearly following an elaborate, over-arching structure.

Is “Picard” a detective series? “Maps and Legends” has a horror-movie-like cold open set 15 years ago on the day when the “synthetics” — androids based on the late Lt. Commander Data but not nearly as sophisticated — suddenly went murderous and destroyed Starfleet’s Utopia Planitia shipyard on Mars. Episode director Hanelle Culpepper did a brilliant job of slowly ratcheting up the tension: When that insensitive human says to that squad of androids, “Good morning, plastic people!” you know exactly where he’s coming from, and that the synthetics may have a good reason for rebelling. They seem to be treated merely as a labor force (are they slaves?) in a way that Data never was. Perhaps because simply their strength and speed outmatched their actual intelligence.

Something seems to have taken over the synthetics, forcing them to destroy the shipyard; an action that will, in turn, compel a weakened Starfleet to call off their rescue armada to save as many Romulan lives as they can.

The design of Utopia Planitia is the best bit of world-building we get in “Maps and Legends,” and, thrillingly, it looks like the rendering of the Martian shipyard in the “Star Trek: Ships of the Line” calendar this writer hung on his wall as a 13-year-old. The ships around it look very much of a piece with the “Enterprise-E” and other Starfleet vessels we saw around the time of “Star Trek: Insurrection,” “Nemesis,” and the last couple seasons of “Deep Space Nine.”

It’s a compelling beginning to “Maps and Legends” — we see the what and the how of the synthetics’ revolt, but we don’t get the why. So, again, is this a detective series?

That seems to be the case when we return to the present day (er, the year 2400). Picard and his Romulan housekeeper Laris (Orla Brady), who, based on her accent, must have spent considerable time working for a Tal’Shiar cell in Dublin, go into full CSI mode, visiting the Boston apartment where Data’s late daughter Dahj said Romulan assassins attacked her. Combined with some earlier talkiness at Picard’s vineyard, it’s a seven-minute exposition dump crammed with technobabble — something to do with “anti-eptons” — that doesn’t really achieve anything (Picard doesn’t even find where Dahj’s sister Soji, who he’s now seeking, is located) other than to establish that there’s a secret, almost mythic cabal that’s been pulling the strings beyond the Romulan CIA, the Tal’Shiar, this whole time. The cabal is called the Zhat Vash and they hate artificial intelligence in all its forms, apparently. They’re the ones who killed Dahj. And rumor has it they’ve infiltrated the Klingon Empire, the Gorn Hegemony (woot!), and even the Federation. 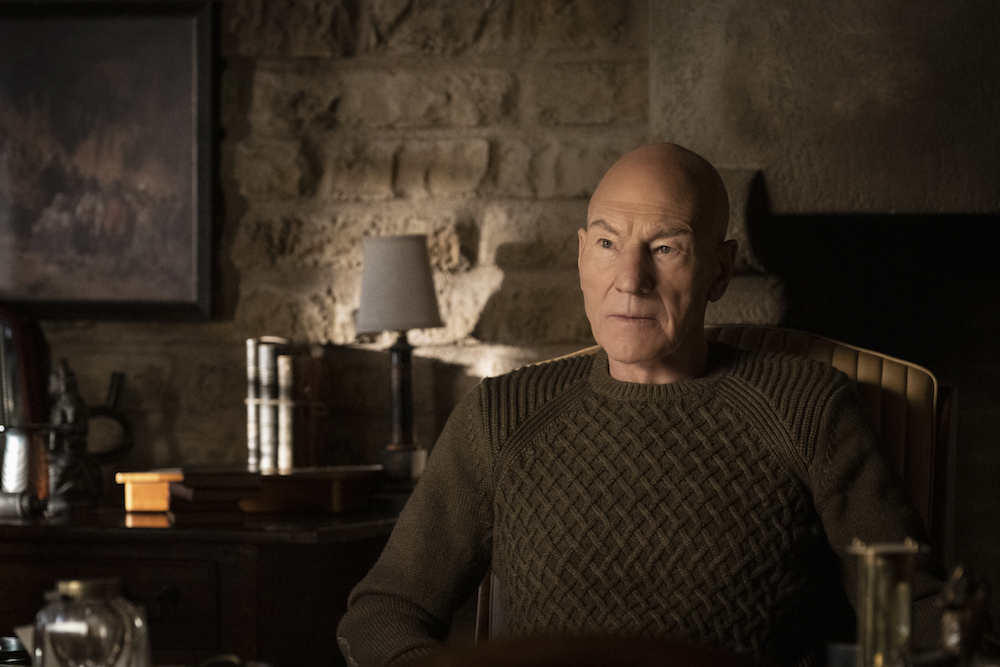 From there, we cut to where Soji really is hanging out: a Borg Cube that’s been repurposed as a kind of Romulan Free State base/research site, and which Soji calls “The Artifact.” She and her new friend Narek (“I didn’t know Romulans could be so hot,” said another researcher about him) crossed the Neutral Zone of their relationship very quickly and fell into bed together. Hey, you do what you can to relieve stress when you spend all your days on a Borg Cube helping free drones severed from the collective regain their individuality. Performing surgery to remove the drones’ cybernetic implants appears to be much of what Soji and her fellow researchers do.

OK, but does that mean this is a medical show? Suddenly it seems to be. An old doctor friend of Picard’s, who served with him on the U.S.S. Stargazer (the ship he commanded for 20+ years before the Enterprise D), visits him in LaBarre and tells him the degenerative condition he was diagnosed with in the “Next Generation” finale “All Good Things…” has progressed. Eventually it’ll leave him suffering from dementia. And that means the clock is ticking for Picard to have some last adventures. “I don’t know what kind of trouble you’re planning to get into,” Dr. Benayoun says. “Maybe if you’re lucky, it’ll kill you first.”

That seems to compel Picard to leave his vineyard behind once and for all and embark on a quest to find Soji and possibly use her to bring back Data. Or find Bruce Maddox, the A.I. researcher who went from being the villain of the classic TNG episode “The Measure of a Man” to Data’s friend and the mastermind of the “synthetics” and have him revive Data. But that means the show becomes a bureaucratic drama, as the former captain returns to Starfleet HQ in San Francisco and has a testy exchange with Admiral Clancy (Ann Magnuson) that’s as over-the-top in its emotionality as this overwritten series appears to aspire toward. “Sheer. Fucking. Hubris,” Clancy says of Picard to begin their testy exchange, with “Don’t you dare lecture me!” ending it. And here his return to Starfleet HQ began with such a lovely moment of him gazing up and seeing holo displays of the various Enterprises of years past. (Curiously, the Enterprise-E does not follow the Enterprise-D — does that mean it’s still in service?)

Clancy says that multiple Federation member worlds threatened to leave the interstellar coalition if Starfleet had followed through and really saved as many Romulans as they could. So basically, those planets would have conducted their own Brexits if the Federation hadn’t stopped taking in refugees. Set phasers to political relevance!

Picard’s not going to get an official Starfleet ship, meaning if he’s going to go on a “Star Trek III: The Search for Data” quest he’s going to have to find his own. So he puts on his old combadge (the design used in the movies, “DS9,” and “Voyager”) and contacts Raffi (Michelle Hurd), who doesn’t seem interested in helping him. Actually, she holds him at phaser-point, she’s so resistant to seeing him, until Picard tells her there are Romulan assassins working on Earth. That got her attention. Raffi seems to be ex-Starfleet Intelligence, and she’s probably thinking, “Why is it that Starfleet seems unconcerned by the idea that Romulan agents could be carrying out assassinations around Earth?”

We get an answer to that pretty quickly when we see that Commodore Oh, a Vulcan Starfleet official, is working with Narek’s sister, a Romulan who “rounded” her ears to fit in on earth as Starfleet’s Lieutenant Rizzo. (Rizzo, really? Is this Romulan a Muppets fan?) Oh definitely seems like a Vulcan and not a Romulan herself, because Rizzo speaks to her brother and says that they can’t alienate Oh as an ally (which would seem like less of a worry if she were a Romulan herself.) Apparently Rizzo and Narek have a bad cop/good cop dynamic. Rizzo’s going around ordering hit squads to kill people — she seems to have been behind the mission to kill Dahj — while Narek uses his charm and the power of seduction to get what he’s looking for from Soji.

And that reveal that Narek is definitely with the bad guys here and Soji may be in danger is where “Maps and Legends” leaves us.

When is this show going to start?