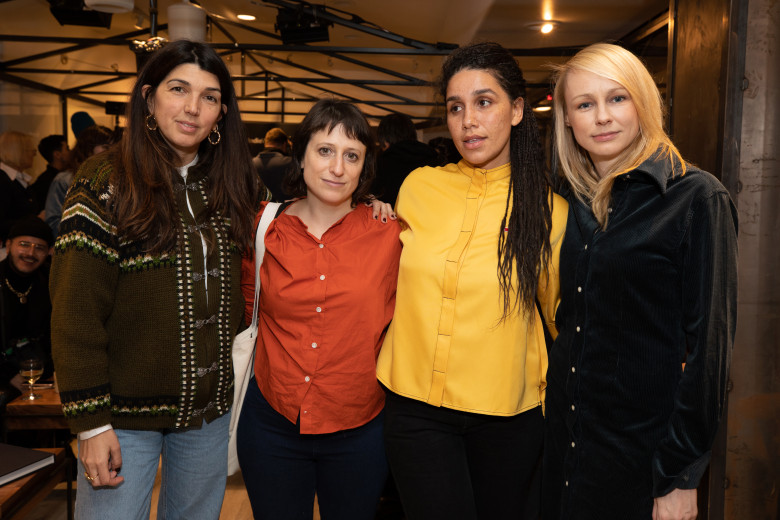 “Will you just look at this room?” Long before IndieWire Editor-in-Chief Dana Harris-Bridson managed to wrangle a packed assortment of some of Sundance’s many female filmmakers from a bustling cocktail hour to a three-course meal one floor above, the guests were something to behold. “Miss Americana” filmmaker Lana Wilson easily chatted with “Shirley” director Josephine Decker, who soon sought out “Promising Young Woman” filmmaker Emerald Fennell to congratulate her on her Saturday night premiere. Across the room, Zeina Durra (“Luxor”) and Kitty Green (“The Assistant”) formed a talkative circle with Garrett Bradley (“Time”) and Eliza Hittman (“Never Rarely Sometimes Always”).

At IndieWire’s annual Female Filmmakers Dinner on Sunday night at the Sundance Film Festival, presented by Canada Goose, all the honored guests were eager to chat with each other about their latest work (and what’s to come). The event celebrated directors debuting new films at the festival, including Radha Blank, Decker, Fennell, Ekwa Msangi, Kirsten Johnson, Channing Godfrey Peoples, Wilson, Hittman, Liz Garbus, Nicole Newnham, and Durra.

At this year’s Sundance, female filmmakers weren’t in short supply: 29 percent of all feature films were directed by one or more women, including hot titles like Hittman’s “Never Rarely Sometimes Always,” Blank’s “The 40-Year-Version,” Fennell’s “Promising Young Woman,” and Wilson’s “Miss Americana.” (Even better: in competition sections, women-directed films made up 46 precent of the field).

And that’s just one piece of Sundance’s offerings, as some of the best films of the festival (that just so happened to be directed by women) rounded out every section of the fest’s wide-reaching lineup, from documentaries to shorts, studio films to debut indies hoping to snag distribution. No one is more pleased to check out what’s on offer than the other female filmmakers.

“Time” documentarian Bradley admitted that, in the first-weekend whirlwind of Sundance, she’d yet to see another film, but she was hoping to change that come Monday. “The lineup has been really exciting, and I’m super-excited for the week to begin, and I can just sit in and watch as many movies as possible,” she said.

At the event, she met plenty of fellow filmmakers who had made new films for her to dive into, including Kitty Green and Hittman, who Bradley fell into easy conversation with from the start of the event.

“I think it’s important that we not be afraid of each other or put ourselves against one another,” Bradley said. “I think there are so many different barriers that exist between women in general, and then when you put that in the context of an industry or a market or your work, you’re working against even more. It’s great to just be present and have fun!”

Second-time Sundancer Fennell (in 2017, the “Killing Eve” showrunner screened her “Careful How You Go” in the shorts program) was still buzzing from the raucous Saturday night premiere of her Carey Mulligan-starring “Promising Young Woman.” She was thrilled to meet other filmmakers after a full day of press for her upcoming Focus Features release.

“It’s the most welcoming place, makes you feel part of a whole community,” Fennell said. “I think things these things quite intimidating, but everyone here is lovely, meeting all the other female filmmakers is very heartwarming. You don’t really get to meet, you kind of expect to hang out all the time, but of course you don’t. And all these people that you admire and think are amazing, but you’ve just never seen all of them!”

Fennell, who discovered a new fan in fellow attendee Zosia Mamet, who sought out the filmmaker to tell her how much she enjoyed her first feature, was enthusiastic about the communal aspect of the festival.

“It really proves why movies and festivals and theater is important,” Fennell said. “We should all be communally watching stuff. TV and streaming is amazing and I love it, and it’s enriched all our lives, but there are some things you want to watch all together. That’s why I wanted to make this as a movie, because I wanted people to be able to experience it together.”

The event took place on Sunday, January 26, at Canada Goose’s Base Camp on Main St. in Park City, Utah, the heart of the action at the annual festival. Here’s the full list of directors who were honored at the IndieWire Female Filmmakers Dinner at Sundance, presented by Canada Goose.

This Article is related to: Film and tagged canada-goose, Female Filmmakers, Festivals, Sundance