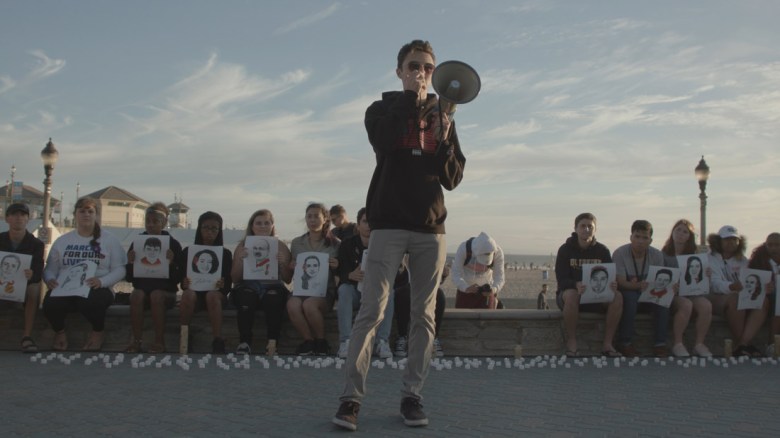 Documentarian Kim A. Snyder had been down this road before, talking to grieving parents and families about children felled by gun violence, three years ago with 2016’s shocking “Newtown.” “I thought, ‘That was it, I was done,'” she told me on the phone. “Since that time, there have been many hundreds of thousands of mass shootings; people are numb. That’s a movie I couldn’t or wouldn’t make today, it was a different moment and motivation.”

But in February 2018, Snyder found herself in Tallahassee, Florida, watching a fiery protest on the steps of the Capitol in the wake of the deadliest high-school shooting spree in U.S. history: At Marjory Stoneman Douglas High School in Parkland, a 19-year-old gunman with an AR-15 automatic rifle killed 17 people and injured 17 more. “The kids arrived demanding change in the state of Florida,” she said. “They were enraged, pissed, and traumatized. That was the segue for me, the thing I couldn’t let go of after Newtown. The nation was not understanding what it’s like to have traumatized people in inner cities not wanting to go to the movies anymore, kids who are really fucking scared to go to school. I emerged thinking, ‘Nothing’s been done.’ I wasn’t done with that idea of surviving traumatized kids.”

This time, however, Snyder wanted to approach the issue “only through the lens of youth,” she said. “No adults.” The result is her coming-of-age documentary “Us Kids,” which premieres in the Sundance Documentary Competition on Saturday — with 13 Parkland survivors, parents, and #NeverAgain activists on hand — and is seeking distribution.

The filmmaker cobbled funding together with support from Impact Partners and “Newtown” producer Maria Cuomo Cole, Laurie Cheatle, and Jamie Patricof. While Snyder could have found a home for the movie sooner, she kept her independence, which was crucial to building the trust of her radicalized activist subjects, from charismatic Emma González, who rebuked politicians’ “thoughts and prayers,” to born politician David Hogg, who seemed able to throw off constant social-media trolling. “I wanted to keep control of it,” said Snyder. “They didn’t want to feel manipulated or owned. This was a way of saying, ‘I can control this narrative with you a bit; we can be patient and take the outcome and tell your story on your terms.'”

Four nights after the massacre, Cameron Kasky came up with the name “Never Again” and posted “Stay alert. #NeverAgain” to Facebook. All four were on the cover of Time with other members of the Never Again MSD; but the film shows Kasky eventually burning out on active participation in the “March for Our Lives” rallies and social media. 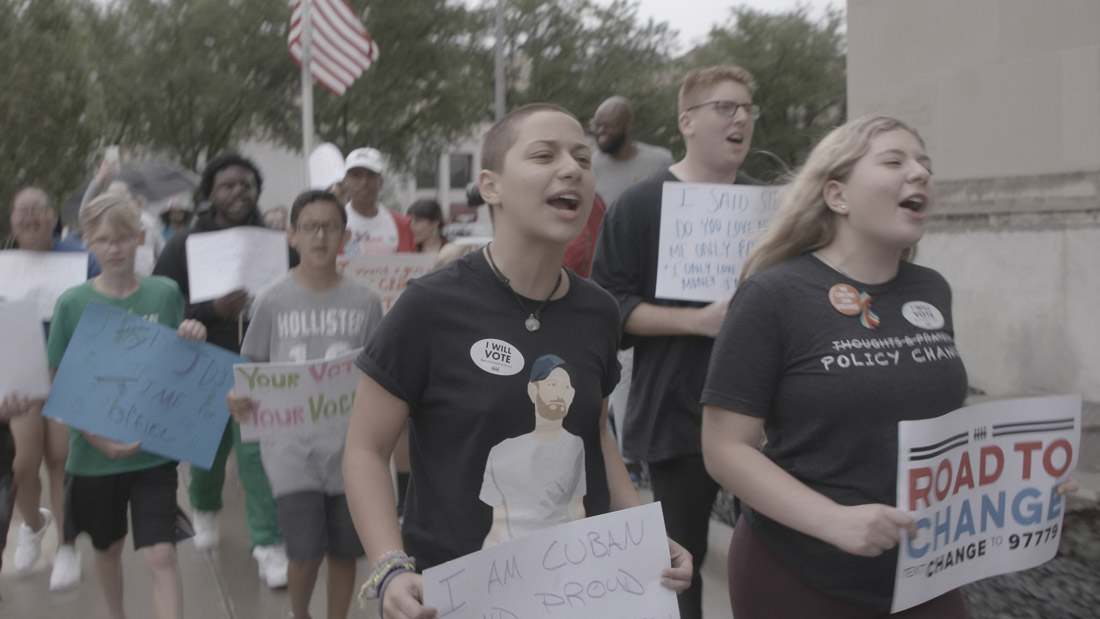 “He does represent, along with Emma, the toll this took on young people,” said Snyder. “David has got the wiring of a young revolutionary, the big thinker, so intellectually gifted. People don’t realize Emma writes a lot of the speeches. She’s very humble, she didn’t want to be the star. It’s still important for her to be part of the group, even though she was singled out because she is a charismatic, wonderfully articulate, amazing writer. Nobody wrote anything for them; they really did do all that.”

In one key scene, Kasky takes on a two-way conversation with a circle of pro-NRA men who accuse him of being a puppet mouthpiece for others. “It’s a teaching moment for me,” said Snyder, “a test of a country divided, that civil discourse of some kind is possible. The kids have persistence, they put all that to good, they keep going at it, and don’t relent. They had the steam. That’s why movements have been forged by young people. They have that energy; they don’t take no for an answer.”

Snyder and her crew went on the road with the Never Again kids in June, following them across the country for two months. “It was like following a rock band,” she said. “They were exhausted, and I didn’t want to intrude and force intimacy yet, which they appreciated. They were inundated with so much media. I wanted to separate out, as they were slammed with selfies and cameras a lot of the time; they didn’t want to hear at the end of day, ‘Can we talk a bit?’ That happened later with them.” So Snyder waited for the summer to end before forging deeper relationships with the kids.

The director also bonded with another Parkland survivor wounded in the melee. Samantha Fuentes becomes the heart of the movie, the thoughtful girl next door who is able to articulate the trauma of being shot in her Holocaust Studies class with an AR-15. “She watched her friend killed in front of her,” said Snyder. “It’s remarkable how she got through her days.”

When Fuentes does step up to speak at a “March for Our Lives” rally, she turns away from the mic and throws up under the stress. And then does it again at another high-pressure PEN event. “She was new to the media,” said Snyder. “She is not one of those star kids. She’s not an activist with a capital A. She wanted to make her voice heard in her own way. It’s PTSD. It’s profound what triggers them. Like the vets who come home from war, there’s all kinds of fallout; she had shrapnel in her body. Is it anxiety about how to escape from a given room that triggered her? That is how her body reacted.”

What inspired Snyder was the idea of youth pushing forward a political movement. “I don’t see it as a Parkland movie,” she said. “I see it as a movie catalyzed by that horrific shooting, it sparked a movement that is sustainable, I think. They have over 300 chapters, and are so intent on inclusion. Right away, they said, ‘this isn’t fair. Mass shootings are less than 2% of gun deaths; our counterparts in inner cities across the country don’t get the attention.'”

At the end of the movie, Emma is seen tweeting with Greta Thunberg. Snyder views this story as “bigger than Parkland and guns, actually,” she said. “These things are all connected. The last thing you hear is Emma saying ‘everything’s connected to everything, dude.’ Our kids are going to be the salvation. They created new role models. That’s why it’s not going away. It’s a superhero story. That’s what it is.”

This Article is related to: Film and tagged Documentary, Sundance, Us Kids