Sundance: The playwright's first feature is a smart, scrappy riff on real-world frustrations about the impact of race and age on the storytelling process. 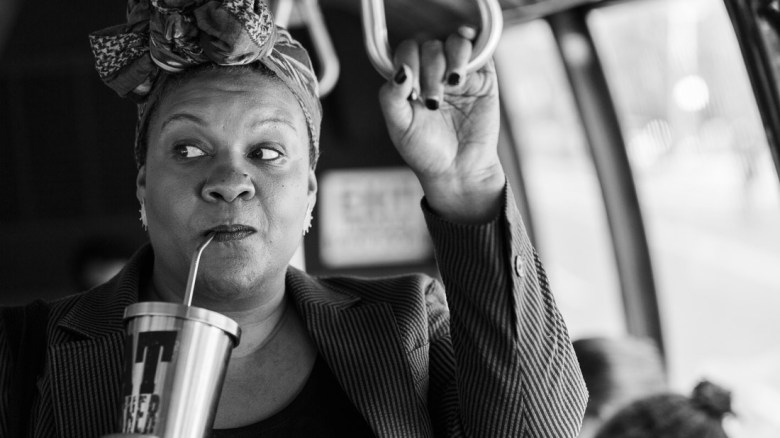 The essence of “The 40-Year-Old Version” comes early, when Radha Blank, playing a fictionalized version of herself, sobs in the corner of her apartment. A soggy rib dangles from one hand as her large frame melts into her chair. “I just wanna be an artist!” she cries, touching on the legitimate anxieties of the black woman at its center, and poking fun at them at the same time. Much about Blank’s smart and funny crowdpleasing directorial debut negotiates that tricky balance, with a scrappy riff on real-world frustrations about the impact of race and age on the storytelling process.

Shot throughout New York with gorgeous black-and-white photography (by “Clemency” cinematographer Eric Branco), “The 40-Year-Old Version” always feels close to the ground, with Blank’s uneven path to writing a new play — and finding unexpected catharsis in hip hop — taking a series of entertaining twists. At 129 minutes, the lighthearted format risks growing stale, and certainly could have shaved off some perfunctory scenes. But Blank is so adroit at populating her story with shrewd observations and her own infectious personality that even its loose structure vibes with the nature of the movie, which maintains the rascally energy of an early Spike Lee joint while channeling a fresh new voice.

Except that Blank isn’t quite that. Like her onscreen alter ego, the boisterous writer-director-star has been an active playwright for years, moonlights as comedic hip hop artist RadhaMUSprime, and most recently wrote episodes of “Empire” and the Netflix series of “She’s Gotta Have It.” Nevertheless, the movie version of Radha has it a little rougher. Almost a decade has passed since her last play, and she roams her tiny apartment gazing at old accolades with little to show for it. Now stuck with teaching theater to ambivalent Harlem teens, Radha faces the prospects of a mid-life crisis at every turn. In a series of well-placed montages, she records input from the colorful characters roaming her neighborhood on her cell phone, including an older woman who tells her that her life started at 40.

Radha’s not sure if she’s outgrown the pressure to take control of her life or simply held back by a system that doesn’t sustain her voice, but she’s all too eager to lash out at the latter possibility. When her lifelong pal Archie (an endearing Peter Y. Kim) drags her to a posh event for theater producers crowded with older white people — one of whom delights at the possibility of “an integrated revival of ‘Fences’” — she can barely contain her rage, and eventually doesn’t. In conversation with elitist producer Josh (Reed Birney in flamboyant caricature mode), he insists her idea for a show about Harlem gentrification must include a prominent white character (“I ask myself, ‘Did a black person really write this?’”), then suggests she write for an upcoming Harriet Tubman musical instead. No wonder she ends up choking the guy.

Blank’s wry script offers many of these amusing parodic outbursts, though it sometimes registers as trying too hard. Fortunately, the movie eventually finds its direction. During one of her late-night whining sessions, Radha casts a judgmental look to the mirror and starts to rap, freestyling about her life with honest results that her writing has yet to provide her.

Suddenly, she’s scribbling notes about everything on her mind, from the diminishing returns of scoring a rave in the New York Times to the “black woman ass on a white man” she notices on the subway. The newfound interest baffles Archie, who really wants to see her put on another play, but it leads her in another direction when she meets D (newcomer Oswin Benjamin), the stone-faced DJ actually invested in her talent and maybe even her personality. When the low-key D confesses after one late-night recording session that she has potential, it’s just enough of an endorsement for her to keep going.

But RadhaMUSprime isn’t ready for primetime, and after bombing hard onstage, Radha’s back to working on her compromised play. With time, the story transforms into a meditation on what it means to be a black storyteller in a white world, so that even its zaniest punchlines carry some measure of purpose. And while the movie may not have the smoothest flow, Blank’s performance becomes key to keeping it all rolling along. Hilarious, self-effacing, and empowering all at once — as one character puts it, “she’s like Queen Latifah and Judge Judy rolled into one!” — Blank seems as if she’s welcoming viewers into the essence of her struggles, so that even the dopiest jokes have a kernel of truth to them.

Blank’s first feature could have used some whittling down, but it’s easy to see why that may have been a challenge. Scene after scene brims with sharp observations, as the movie careens in its final act from a scathing takedown of the magical black man trope to the ultimate example of bad off-Broadway theater. Blank is clearly eager to inject her own history into the drama of her life, reflecting on her late artist-mother’s time in Harlem and sharing snippets of her illustrations in color inserts that deepen the daughter’s nagging sense of duty. Color also surfaces when Blank pitches her idea for “Harlem Ave.” as a hilarious example of how certain ideas often look better in the mind’s eye than they do when brought to fruition in a messy, segregated business.

“The 40-Year-Old Version” isn’t exactly optimistic about the state of black artistry, but Blank’s final confrontation with her biggest fears takes a common cliché — the confessional moment before a captive audience — and gives it fresh flavor, with a mic drop for the ages. “The 40-Year-Old Version” doesn’t overcome all of its rough edges, but they’re so closely tied to the personality of the creator that it’s hard to shake the underlying appeal. “The 40-Year-Old Version” has a fascinating meta quality lurking just beneath its playful surface, as it documents a creative crisis on the brink of a solution — and, with this charming first feature, finds that solution with its very existence.

“The 40-Year-Old Version” premiered at the 2020 Sundance Film Festival in U.S. Dramatic Competition. It is currently seeking U.S. distribution.

This Article is related to: Film, Reviews and tagged Reviews, Sundance, The 40-Year-Old Version