Sundance: Florian Zeller's film makes an inexplicably cruel element of the human condition recognizable in a way that only good art can. 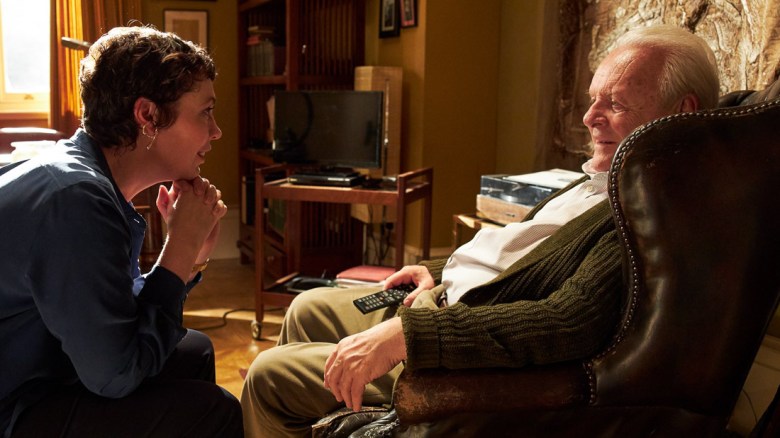 At once both an unsettlingly accurate simulation of what it’s like to love someone with dementia, and also a strikingly believable conception of what it’s like to live as someone with dementia, Florian Zeller’s “The Father” envisions senility as a house of mirrors in which everyone loses sight of themselves. Adapted from Zeller’s award-winning play of the same name, and directed with a firm hand by the playwright himself, this M.C. Escher drawing of a movie chips away at the austerity of the Euro-dramas that inform its style until every shot betrays the promise of its objectivity, and reality itself becomes destabilized.

“The Father” is a slippery film in which even the most basic information can be vaporized in the span of a single cut, but there’s no ambiguity to the fact that Anthony Hopkins plays the title role (although it might be worth noting that the character’s name has been changed from Andre to Anthony, a self-reflexive detail that adds a crunchy meta core to one of the movie’s most harrowing moments). Anthony is not well, but even that much isn’t clear at first. For better or worse he still has the vim and vigor of a much younger man, but his mind is a leaky ship in search of a lighthouse surrounded by jagged rocks.

We’re first introduced to Anthony as he sits in his posh London flat and listens to classical music with an impish grin of recognition plastered across his face: the Platonic ideal of a wealthy retired Brit. Alas, the water is troubled when his daughter Anne (a bubbly and tender Olivia Colman) drops by with some bad news: She’s moving to Paris to live with her boyfriend, and she’ll have to place Anthony in a home if he continues to scare off the live-in aides who look after him. “I don’t need anyone!” the old man barks, a little flash of Lear cracking through his manic demeanor, either refusing or unable to admit that he’s lost track of himself.

Later — though when exactly is hard to say in an temporally cyclical film that unfolds like a cross between “Amour” and the video game “P.T.” — Anthony finds a man (Mark Gatiss) sitting in his study and reading a newspaper like he owns the place. And maybe he does. The man insists that he’s Anne’s husband, that Anthony is a temporary guest in their flat, and that his wife hasn’t thought to mention that she’s running off to Paris with another man; the sadistically giddy delight that Anthony takes in sharing that “information” is both a rare spot of humor, and an ominous sign of someone who’s been stripped of everything but his cruelty.

But the joke is on us. While Zeller’s austere compositions have already conditioned the audience to accept the cold truth of each shot — and invited us to look at Anthony through the privileged lens of our natural pity — the facts of the matter are soon rejiggered like the squares of a Rubik’s Cube. Another woman (the great Olivia Williams) comes home claiming to be Anne, and she’s carrying the roast chicken we could’ve sworn was in the oven already. Perhaps she’s Anne’s sister Catherine, who was always Anthony’s favorite. Why doesn’t she call anymore? Dinner’s almost ready but the sun is still rather bright. Anne says it’s 8pm, but that would seem like a stretch even at the height of summer, and I swear Colman was wearing a cat. A coat. What time is it anyway? Anthony is always checking his wristwatch — tell-tale evidence of the compulsive behavior that anyone familiar with dementia will recognize all too well — but he always seems to have left it in his secret hiding place. Wasn’t he just wearing it? And if Mark Gatiss is playing Anne’s husband, who is Rufus Sewell supposed to be?

On paper, this might sound like the kind of routine gaslighting that psychological thrillers have traded in for decades, but on screen the effect is entrancingly different. By completely eschewing the notion of a subjective camera in a film where objective truth doesn’t exist, Zeller obliterates the binary between confusion and understanding; instead of alternating between each character’s truth in a way that always aligns the camera to one clear perspective, “The Father” levels the entire film into a single reality that’s simultaneously both infallible and untrustworthy. We always know what’s happening, and — with the exception of a few moments that don’t involve Anthony — we never know what’s happening.

The more that viewers get the lay of the land, the more distancing Zeller’s approach becomes. The more we think our way through his Penrose staircase of a timeline, the more the movie loops back around to embarrass our false sense of context. As Anthony grows more irascible, and Hopkins’ tour de force of a performance takes on withering new dimensions (there are discernible shades of all his signature characters in this, as if the actor’s core identity were being dissolved into the various roles he’s inhabited over the years), “The Father” becomes less emotionally involving. That’s not a criticism, nor — this critic suspects — an accident. There’s a reason why Zeller ignores even the most fundamental aspects of Anthony’s former life, and leans on co-writer Christopher Hampton to articulate the gap between the “real” and the “imagined” as beautifully as he did in “Atonement.” We’re not getting further away from the story so much as we’re growing closer to our remove from it, and “The Father” is more interested in that disorienting push-and-pull than it is in a more typical kind of drama.

In a way, it would be dishonest for a portrait of dementia to make you feel too much; the process of watching someone forget themselves seldom allows time for sadness, anger, or any other easily discernible emotion, in much the same way that running a marathon seldom leaves you with the energy to focus on anything more than completing the next mile. On the contrary — and from either side of senility’s two-way mirror — it’s a constant struggle to reassert a shared reality. To recognize someone for who they are while trying not to forget yourself in the process. The brunt of the crying only comes later, after memories of someone are all you have left.

Moments of success don’t result in happiness so much as short-lived relief, and they often curdle into evidence of a deeper failure without any warning. That awful whiplash is on full display in the film’s best scene, an introductory meeting between the father and his bright new aide (a brilliant Imogen Poots, negotiating an entire Pinter play worth of resolve, doubt, and betrayal in just a few short minutes). Anthony is at once both more aware than we think, and less aware than he knows. That tension erupts into a rare burst of melodrama — though Hopkins keeps the ham in check — but it leaves the entire flat unsettled in a way that makes it hard to know what it is you should be feeling. Resignation might be the only option, even if it requires you to shirk your responsibilities as a viewer or a child.

Over the course of 97 increasingly grim minutes, Zeller’s puzzle-box drama distills the abstract concept of senility into an ontological experience that denies your sympathy at almost every turn. While brought to life by a handful of brilliant performances and some very impressive sleight-of-hand, this isn’t a film that tugs at your heartstrings, introduces you to memorable characters, or even makes it possible to keep track of their names. It’s not a film that’s easy to recommend, or perhaps even possible to love. “The Father” exists for no discernible reason other than to render an inexplicably cruel element of the human condition in a recognizable way, and to do so in a way that only good art can.

“The Father” premiered at the 2020 Sundance Film Festival. Sony Pictures Classics will release it in theaters last this year.

This Article is related to: Film, Reviews and tagged Anthony Hopkins, Reviews, Sundance, The Father