The “Pariah” and “Mudbound” filmmaker has her first misstep, muddling compelling material and a miscast star in Anne Hathaway. 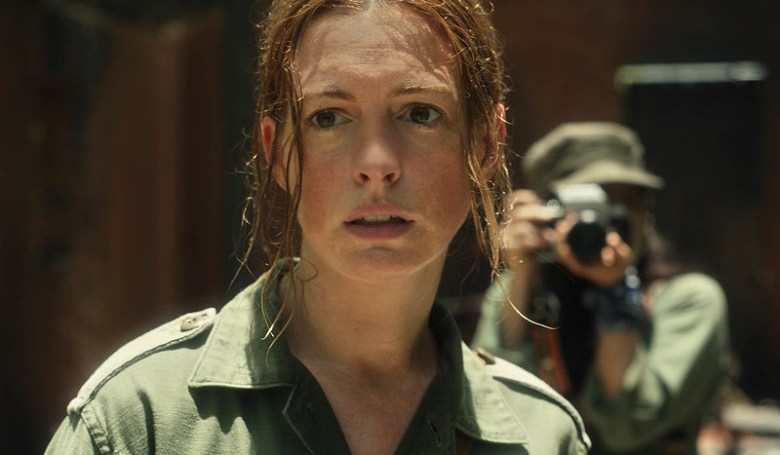 “The Last Thing He Wanted”

Editor’s note: This review was originally published at the 2020 Sundance Film Festival. Netflix releases the film on Friday, February 21.

There’s a reason why, over the course of a career that has spanned nearly six decades, Joan Didion’s remarkable body of work has received the film adaptation treatment just twice. In 1972, Didion and her husband John Gregory Dunne wrote the screenplay for Frank Perry’s big-screen take on her novel “Play It As It Lays,” a celluloid turn that Didion followed up with various contributions to other scripts unrelated to her own books (including the 1976 “A Star Is Born” remake).

Despite mostly good reviews for the Perry film, even Didion seemed to quickly get hip to the fact that her work isn’t necessarily translatable to other mediums. Others surely got the memo, too, with almost a half a century going by before anyone else tried to turn Didion’s gimlet-eyed writings into a movie. And time has not been kind to the endeavor: Dee Rees’ “The Last Thing He Wanted” is the filmmaker’s fourth feature and her first misfire, an incoherent offering that is done no favors by its unforgiving material and even less by an array of miscast stars and baffling narrative choices.

Some of that is baked into Didion’s original novel, often deemed one of her more “spare” and less personal works, and one that hinges on outrageous coincidences and thin characters that drives a wonky political plot. It’s not an obvious choice for the “Pariah” and “Mudbound” filmmaker, though Rees’ interest in dialing in on the story’s fraught familial bonds provides something of a window into what might have appealed to her about the project. In both of her earlier features, Rees was working with characters defined by their families and their (often unhealthy) relationships with each other, in “The Last Thing He Wanted,” a similar dynamic unfolds.

Initially introduced as a dogged, daring reporter who does her best work while in the line of (often quite literal) fire, Hathaway’s Elena McMahon has been hacking away at a story about revolution and violence in ’80s-era Nicaragua alongside her dedicated photographer (Rosie Perez) before it all goes topside. Years later, the pair are still stuck back in D.C. while their newspaper freezes any and all Central America jobs, keeping Elena from further cracking the kinds of stories that drive her. It’s not the only thing going on in her life, as Rees and co-writer Marco Villalobos move freight-train-fast through other complications: her dead mother, her lonely teen daughter, a divorce, a cross-country move, a brush with breast cancer, and the sudden reappearance of her swaggering father Dick (Willem Dafoe).

When Dick falls ill in Florida, Elena ditches her lackluster gig on the campaign trail following Ronald Reagan as he guns for a second term, all the better to help her deteriorating dad and to, well, what exactly? Ditch the job she loves (even if her current assignment is lacking), piss off her already unhappy editor, forget about the tantalizing packet of photos that ended up in her hotel bed? All of that, and more. Eventually, “The Last Thing He Wanted” will aim to make the case that all of this — her bad job, her sick dad, the photos — are intimately connected, and yet nothing coalesces into a coherent narrative, let alone one built on a series of linked machinations that reach the upper echelons of various governments and military bodies.

Dick’s illness undoes everything we’ve already learned about Elena, from her dedication to her job to her hardened self-determination. Netflix’s official synopsis says that Elena “loses the thread of her narrative” as the film unfolds, but it’s really “The Last Thing He Wanted” that loses its thread, its narrative, and all of its control. Hopscotching from Miami to Nicagaura to Costa Rica and onward, Elena finds herself caught in a bizarre web that stems from her father’s insistence that she carry out one last job for him, earning him one last score before he dies or totally loses his mind. Despite the fact that Elena is a whipsmart reporter eager to unearth the misdeeds of “war pigs” scattered around Central America, she takes on the favor, which requires nothing less than her stepping into her dad’s shoes.

Oh, Dick’s job? Illegal gun runner, selling to the very people Elena has been trying expose. It’s a big enough ask on paper, but filtered through a film that’s both sprawling and thin, it becomes incomprehensible. Cheesy flashbacks and callbacks and voiceovers attempt to paper over certain particularly messy sequences, but the film remains incomprehensible. At nearly two hours long, “The Last Thing He Wanted” still feels as if every other scene was left on the editing room floor, perhaps in an attempt to echo the looser style of Didion’s novel. Nothing connects, nothing gels, and every thread is lost.

Hathaway tries her damnedest to keep Elena on track through an increasingly bizarre journey, but her character’s shifting priorities and motivations never allow the actress to sink into Elena. There’s a sense that the character herself floats through the proceedings, her steely resolve crumbling in the face of so many double-crosses and complications. It’s a potentially compelling idea, but that’s erased by a jarring return to Elena, Hardened War Reporter. For a seasoned stringer with nerves of steel, she’s terrible at reading people, remembering details, and acting with any regard for safety. She’s the kind of gal who goes on the run in a strange city and doesn’t bother to lock her shady hotel room door behind her.

Joining her are a motley crew of miscast stars who don’t appear to exist inside the same film. Ben Affleck is there, too, in fits and starts (perhaps his contract only demanded four days of work from the ostensible co-lead?) as a government heavy who is either helping Elena or hurting her, pulling the strings to use her or going out on a limb to rescue her, fucking her or fucking her.

Defoe is electric as her rangy dad, but he and Hathaway never wrangle believable familial chemistry, instead scanning as bemused adversaries expected to out-act each other for the hell of it. Edi Gathegi appears as yet another friend-or-foe who arrives and disappears at random, a bizarrely plotted character arc that only gets the barest of conclusions during a truncated end scene that’s nothing more than prologue. And that’s before Toby Jones shows up, doing a limp approximation of his own Truman Capote, and long before David Arquette appears as the younger version of a character apparently so important that he gets a flashback self just as anyone (Elena, the audience) is bothering to learn his name for the first time.

And yet for all the illogical plotting and bewildering character work of “The Last Thing He Wanted,” other facets of Rees’ craftsmanship are often on display. Set mostly in the mid-’80s in such varied locations as the red-white-and-blue campaign trail, a rebel training camp in the middle of nowhere, and a dilapidated beach resort on the edge of the world, the period-appropriate elements are immaculate. From costumes to production design, it’s all a wholly believable world (aside from the fact that, narratively, absolutely none of it is believable). Rees’ artfully crafted shots elevate even the wackiest scenes, and an early dolly shot that takes us (and Hathaway and Perez) literally through an airport is a stunner.

The rest of it, though? It’s the last thing any Didion fan would want, any Hathaway fan, any Rees fan. Didion’s work is brilliant as prose, but makes for awkward screenplays; this is a misfire that should have stayed on the page.

“The Last Thing He Wanted” premiered in the Premieres section of the 2020 Sundance Film Festival. Netflix will release it on February 21.

This Article is related to: Film, Reviews and tagged Anne Hathaway, Dee Rees, Reviews, Sundance, The Last Thing He Wanted