Sundance: The "Martha Marcy May Marlene" director returns with a slow-burn drama where every frame benefits from masterful composition. 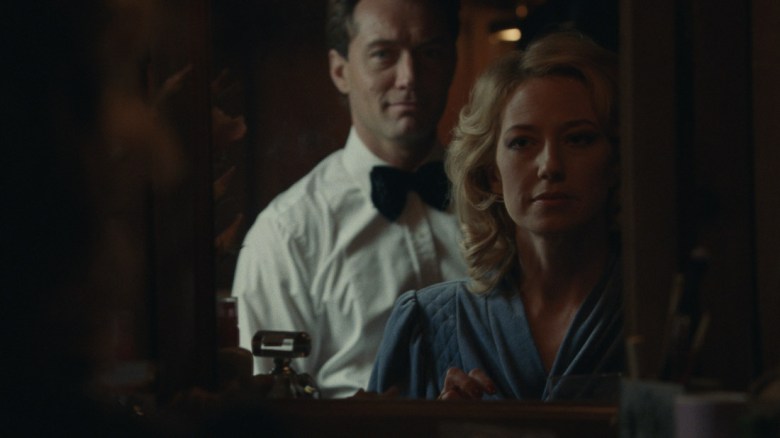 Writer-director Sean Durkin’s mesmerizing debut “Martha Marcy May Marlene” may put unreasonable expectations on his long-awaited sophomore effort, “The Nest,” because the masterful psychological thriller that put Durkin on the map has a lot more going for it than the sleek, contained period piece that has followed it up. However, “Martha” casts an unmistakable shadow on “The Nest,” which displays the same complex formalism of its predecessor while settling into a more conventional mold. In Durkin’s icy, slow-burn drama, every frame benefits from masterful composition. Carrie Coon and Jude Law deliver sizzling performances defined by mutual indignation, but it ultimately amounts to little more than talent spinning its wheels on both sides of the camera.

After the success of “Martha” in 2011, Durkin directed the 2013 British miniseries “Southcliffe,” and “The Nest” assembles a two-hour buildup of overlapping stories that may have benefited from the episodic approach as well. The mid-eighties saga revolves around Rory (Law), an ex-commodities broker who has been living with his wife Allison (Coon) and their two kids in America to be closer to Allison’s family. As the movie begins, Rory has grown bored of chasing fortune in the U.S. and enacts a plan to return to his old firm, convincing his wife to move the family back to his native England and into an old country manor they can’t really afford.

With the couple settling into their huge new property, several mini-stories unfold at once: Rory struggles to chase new profits with his ambivalent boss (a slimy Michael Culkin) while Allison settle into the drab routine of life on the farm, replete with her very own horse. Their teen daughter (Oona Roche) befriends some hard-partying locals, while their adolescent son (Charlie Shotwell) contends with bullies. Meanwhile, the creepy mansion is so cavernous and empty that it’s a wonder “The Nest” never becomes a ghost story. Instead, it’s the anti-“Schitt’s Creek” — the story of a man so keen on living a wealthy lifestyle that he decides to invent it for himself, at least until reality sets in.

Most of these developments are relegated to passing exchanges as Durkin keeps much of the focus on the complex dynamics of the marriage. On the one hand, Rory and Allison seem to maintain an intimate bond, with a fiery intensity that allows Allison to call her husband on his bullshit while embracing his ambition at the same time. But even she has her limits, and Rory’s been pushing them long before “The Nest” gets rolling: The family has moved four times in 10 years, driven by his pursuit of wealth more than the capacity to benefit from the stability it might bring.

It doesn’t take long to realize that the Emperor has no clothes, as the vast property that Rory acquires outside the city requires more costly upkeep than he can afford, and his business prospects show no sign of sudden progress. Rory’s bumbling trajectory unfurls gradually over the course of the movie, as Allison routinely calls him out until her mounting frustrations give way to the inevitable meltdown. It’s fun to watch Law and Coon trade barbs in fits and starts, but Durkin’s screenplay is far more on-the-nose than his meticulous mise-en-scene and the extraordinary actors at its center. By the time Allison exclaims, “You’re a poor kid pretending to be rich!”, that much has been evident enough on its own.

Allison struggles with Rory’s relentless drive in part because she abandoned own business career but chose to let her husband her pursue his breadwinner dreams. Durkin relishes in every opportunity to soak in the simmering resentment that comes out of this dynamic. In one remarkable shot, Rory’s boss toasts his returning staffer at a stodgy party, calling him “exactly the right combination of old British and new American,” as the camera lingers on Law and Coon’s dueling expressions. His wry, scheming grin and her contorted sneer provide the essence of the movie’s bitchy appeal, and it’s hard to go wrong when such nuanced expressions have the power to embody the story’s most potent themes.

Yet Durkin frequently attempts to reach beyond the interpersonal dynamics for bigger ideas beyond his grasp. Rory dreams of running a 24-hour trading firm, reflecting the emerging global market a year before Gordon Gekko’s “greed is good” speech made the rounds. Rory may be an early victim of that impulse, but he’s a rather hollow embodiment of it all the same. And while he zips around an office attempting to pitch his next big plan, Allison undergoes a meandering subplot involving a sick horse and drab farm work, while the stories of their children barely consume more than a few minutes of screen time. It often feels as though Durkin is trying to cram several stories into a much smaller canvas, resulting in a confluence of events coming to a head in a tidy fashion just to help the story along.

Nevertheless, Law and Coon have thrown themselves into this material with rich, measured turns that come alive in Durkin’s elegant frames. Coon in particular delivers one of her most riveting performances to date, oscillating from supportive housewife to fiery individualist, and a dance floor sequence in which she works through her rage is practically a short film unto itself. Law, meanwhile, exudes the dark comic possibilities of a man caught between his forced confidence and the embarrassing consequences of failing to come up with a plan. Set to an absorbing slow jazz score by Arcade Fire’s Richard Reed Perry and assembled out of masterful long takes with “Son of Saul” cinematographer Mátyás Erély, the drama carries an air of sophistication even when the narrative falters.

As the movie reveals its full intentions, it’s impossible not to consider the roots of the filmmaking sensibilities in play. With “Martha Marcy May Marlene,” Durkin tapped into underlying terror of a cult lingering in the mind of its escaped victim. With “The Nest,” he applies a similar approach to the family as they come to grips with the lie that leads them into a cycle of isolation and bitterness. But it has no new insights into that conundrum beyond some very pretty pictures. Still, if “The Nest” amounts to an elaborate exercise in style, at least it matches the material. Rory’s obsessions are all surface and no depth. For better or worse, the movie follows him into that void.

“The Nest” premiered at the 2020 Sundance Film Festival in the Premieres section. It is currently seeking U.S. distribution.

This Article is related to: Film, Reviews and tagged Reviews, Sean Durkin, Sundance, The Nest