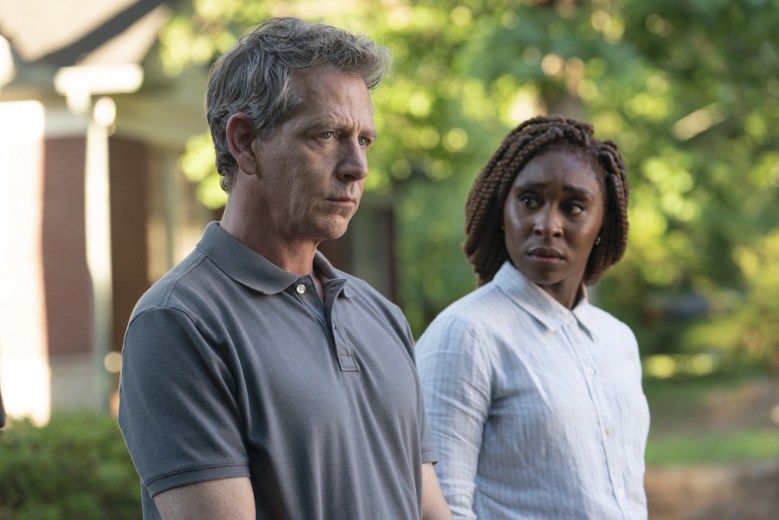 Ben Mendelsohn and Cynthia Erivo in “The Outsider”

At its core, “The Outsider” is a story about belief. Stephen King’s 2018 novel focuses on a small town detective whose job requires him to find concrete answers to real-world mysteries, and then hands him an impossible case he can’t explain — not without considering supernatural possibilities.

King asks the same from his readers, to believe in the unbelievable, except the novel falls spectacularly short is in justifying its own request. Perhaps the Master of Horror has been writing about ghosts and demons for so long that he no longer feels the need to convince anyone that believing in the boogeyman is a reasonable, rational choice, but the book tries to combine two, diametrically opposed genres — speculative fiction and true crime — without respecting the foundation of both.

HBO’s “The Outsider” offers a better balance, if not a perfect one. Adapted by Richard Price, who’s known for writing realistic police dramas like “The Night Of,” “The Wire,” and “The Deuce,” HBO’s 10-episode series is still hampered by a few of the original story’s trappings, but its author knows better than to take his audience’s trust for granted. With the help of a great cast (led by Ben Mendelsohn) and eerie, stark direction from Emmy-winner Jason Bateman, “The Outsider” isn’t on the level of Price’s past work — but it’s far better than this story has any right to be.

Meet Ralph Anderson (Mendelsohn), a cop stuck in a job-mandated good news/bad news scenario. Here’s the bad: The Georgia-based detective caught a particularly ugly case involving a brutally murdered child, not long after he lost his own teenage son. Granted, Ralph’s only child wasn’t killed or violated in the woods, but the still-recovering cop isn’t exactly over the injustice of losing his boy. The good news? He knows who’s to blame for this latest death, and he’s going to make him pay for it.

When “The Outsider” begins, Ralph is on his way to arrest Terry Maitland (Jason Bateman), a local Little League coach and father of two girls. Ralph is so convinced Terry is the killer that he cuffs him in the middle of a game, as his wife Glory (Julianne Nicholson), their kids, and lots of townsfolk packed in the bleachers gape in horror. Their beloved, benevolent coach just got shoved into a police cruiser and hauled off to jail. What could have led the police to make such a scene out of his arrest? Well, there are fingerprints at the crime scene, multiple eye witnesses, and video evidence connecting Terry to the murder. So Ralph knows Terry did it. 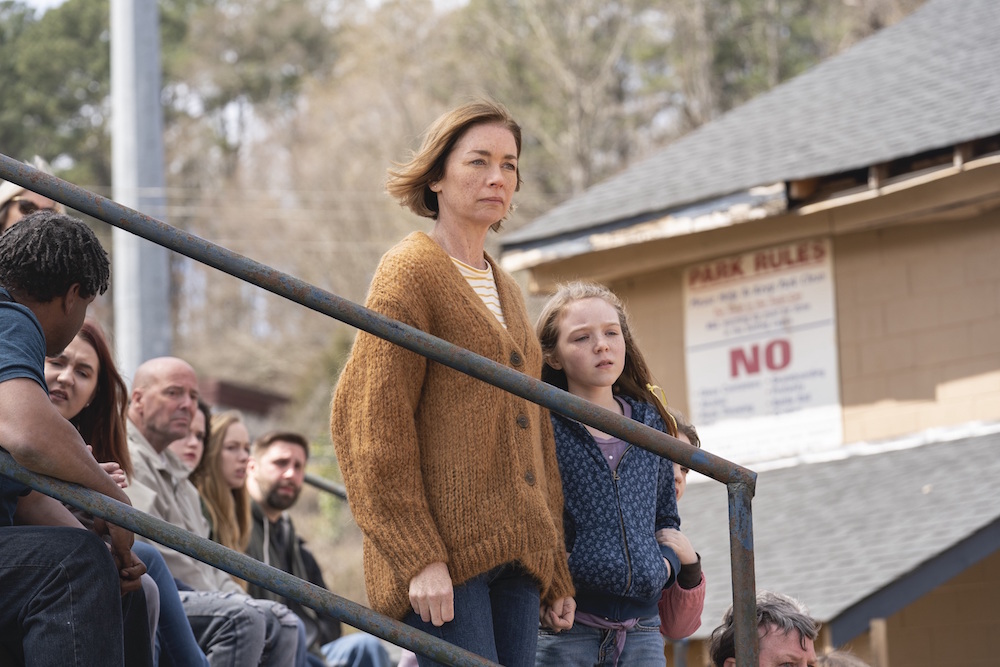 Julianne Nicholson and Scarlett Blum in “The Outsider”

…until he doesn’t. What should be an open-and-shut case inexplicably pivots when just as much evidence contradicts Terry’s guilt. He was out of town when the kid was murdered, he was with a bunch of people, and there’s video of him speaking in public at the boy’s approximate time of death. All of this information is introduced in a jarring and absorbing pilot episode which moves deftly through character introductions as it sets up the conflict of a particularly confounding case. By the end of the first hour (and again in the second), the audience is left wondering linked, yet opposing questions: How did Terry get away with it (because he had to have done it) and who else could’ve done it (because there’s no way Terry did it)?

If that sounds like an exciting start to a murder-mystery, that’s because it is, even if “The Outsider” isn’t actually a murder-mystery. Much of what makes the story so intriguing from the outset is its inherent promise to answer these perplexing queries: “Don’t worry, there will be an explanation for all this weirdness.” And a lot of time in the early episodes is devoted to grounding this dark and gritty drama; jokes are already being cracked about director Bateman’s trademark low-lighting, but it’s an asset, not a problem. Not once did I struggle to see what’s going on in “The Outsider.” Instead, the sharp lines between the black and bright sections of the screen epitomize the conflicting ideals at play. What evil lurks in the darkness can be inexplicable, but sometimes, so is what’s seen in the light.

Mendelsohn and his co-stars do a fine job of keeping the initial episodes on the up-and-up, as well. The Emmy-winner from “Bloodline” instills a jittery eagerness in Ralph; when he says he has “no tolerance” for the unexplainable, he means it. He can’t sleep, he can’t sit still, he can’t do anything but think of ways to move forward. Pair that with Mendelsohn’s expressive eyes and Ralph always feels fully-realized. Great actors like Nicholson, Mare Winningham, Bill Camp, and Jeremy Bobb provide equal dimensionality in even less time, and, after the first two episodes, Cynthia Erivo steps in with a character so filled with quirks and cliches she could’ve disconnected the whole endeavor, but Erivo embodies her with a deliberateness that keeps Holly Gibney tied to the rest of the show. 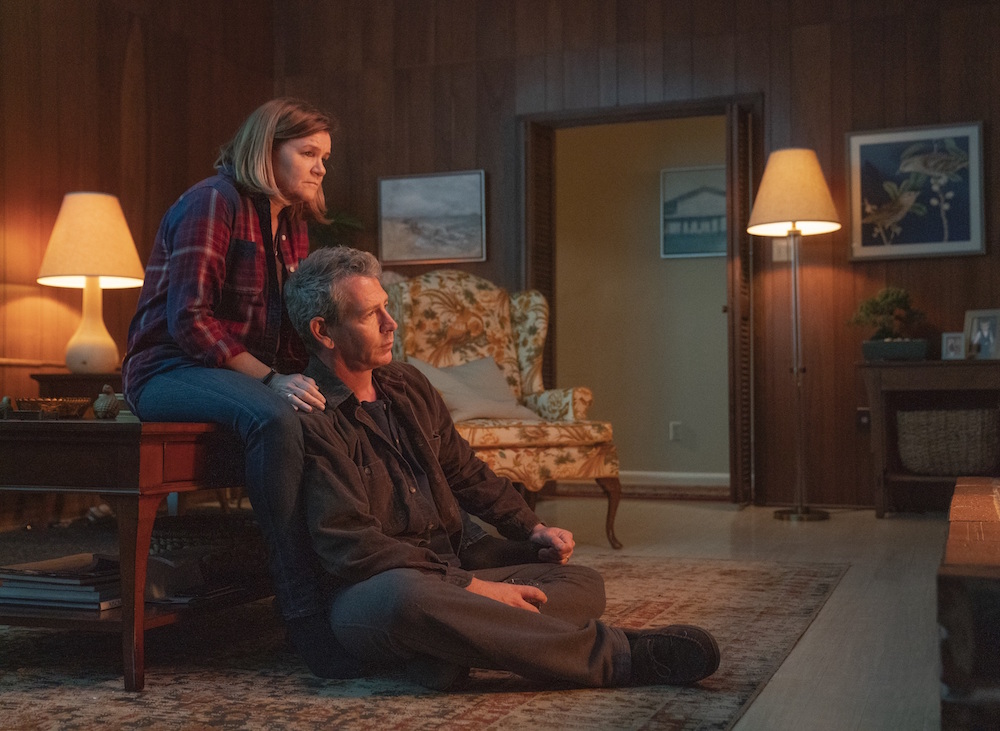 Mare Winningham and Ben Mendelsohn in “The Outsider”

Still, Erivo’s private investigator represents the other side of the coin. If Ralph is an absolute realist, Holly is a studied dreamer. She’s seen things she can’t explain and come to accept that such unanswerable dilemmas are part of life. When she arrives, “The Outsider” reveals its true self: that this case won’t be cracked by traditional police work; that the answer to the impossible questions isn’t linked to a clever plan by a diabolical killer or an overlooked clue by the dogged detectives The answer, in short, is magic.

OK, OK, “magic” may be the wrong word for an otherworldly explanation, but knowing “The Outsider” isn’t actually a true crime story (or, more accurately, it’s not a fictionalized crime story representative of reality) is absolutely critical to enjoying the show — so much so that anyone expecting a realistic conclusion could be outraged by the supernatural twist. Perhaps the Stephen King branding is enough of a tip-off for most people, but the author doesn’t always rely on superhuman acts to explain things; Andy Dufresne didn’t rely on demonic spells to dig his way out of Shawshank. Price’s show does a better job of tipping its hand than the novel, in part because it moves much faster through the initial investigation.

But the biggest mistake of the book could still befall the series. Since “The Outsider” isn’t really a murder-mystery — at least, it doesn’t work as a murder-mystery — it has to be a good drama. Good dramas have compelling characters (check), life-changing scenarios (check), and often explore relatable topics brought out by these people and events. The topic here is belief. How does what we believe in shape our lives? Can not believing in something protect us from it? Can believing too strongly hurt us? Price asks these questions through scenes and lines not included in King’s novel, inviting his audience to think about something other than, “Did Terry Maitland kill that little boy?” After the six episodes provided for review, there’s a fresh path to what could be a new ending. Even if it doubles back to the book, HBO’s “The Outsider” is already more satisfying. Does that make it great TV? No, but at least it gives you reason to believe it wants to be.

This Article is related to: Television and tagged HBO, Stephen King, The Outsider, TV Reviews