Brothers Morgan and Mason McGrew remade the beloved classic from start to finish with stop-motion animation. Watch it here. 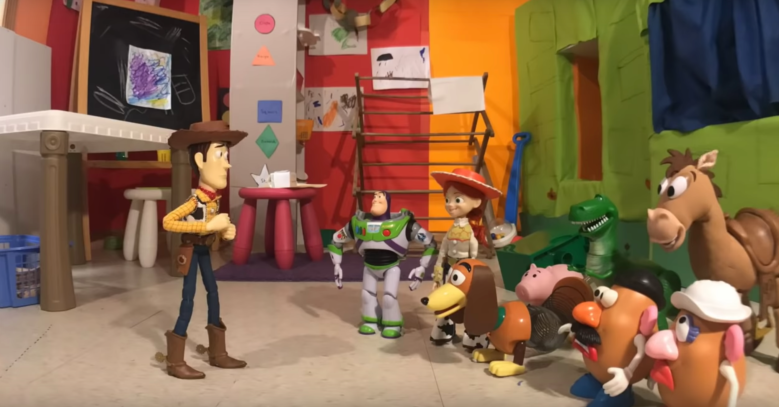 Iowa brothers and “Toy Story 3” superfans Morgan and Mason McGrew, now 20 and 23, spent eight years of their lives recreating all of Pixar’s beloved classic in stop-motion animation — so, the better part of their teenage years. The results, blending real-life toys and the painstaking animation technique, are astonishing. Titled “Toy Story 3 IRL,” the film is shot on nothing but the brothers’ iPhones, and in exceptional detail. The shot-for-shot remake uses the film’s original audio, with voice cast including Tom Hanks as Sheriff Woody, Tim Allen as Buzz Lightyear, Don Rickles as Mr. Potato Head, Joan Cusack as Jessie, Wallace Shawn as Rex, and many more of your “Toy Story” favorites. According to Screen Crush, Pixar’s parent company Walt Disney Studios gave the McGrews permissions to release the film online. Watch it in full below.

A statement from the artists on the film’s Facebook page reads: “How did this project begin? Well, it all started after my brother and I had seen ‘Toy Story 3’ on its opening night. It instantly became our favorite film and….you could say an obsession kinda ensued. I mean, we began collecting just about EVERY new toy from the film to accompany the ones we had as kids. Yeah, a slight obsession. Let’s fast forward 2 years. By this time I’m (Morgan) 16, and I finally realize that ‘Toy Story 3’ was more than just my favorite film. It actually was kinda my life. I was growing up, and I still am (obviously). Anyway, I didn’t want to miss my chance to thank Pixar for making ‘Toy Story 3’ and every other film for that matter. So with a love for Pixar, ‘Toy Story 3’ and filmmaking, the Live Action Toy Story 3 project began.”

Widely regarded as one of the greatest animated films of all time, “Toy Story 3” released in 2010 and went on to become only the third animated film in history to be nominated for the Best Picture Academy Award (after Disney’s “Beauty and the Beast” and Disney/Pixar’s “Up”). It won Best Animated Feature and Best Original Song for Randy Newman in 2011.

Watch “Toy Story 3 IRL” in full below, and prepare to relive all the emotions the original film stirred in you nearly a decade ago. (The near-climactic shot of the toys accepting their inevitable death in an incinerator — a moment, thankfully, thwarted by storytelling magic — is especially harrowing.)

This Article is related to: Film and tagged Animation, Pixar, toy story 3