The Academy is under fire once again for almost entirely shutting out actors of color. 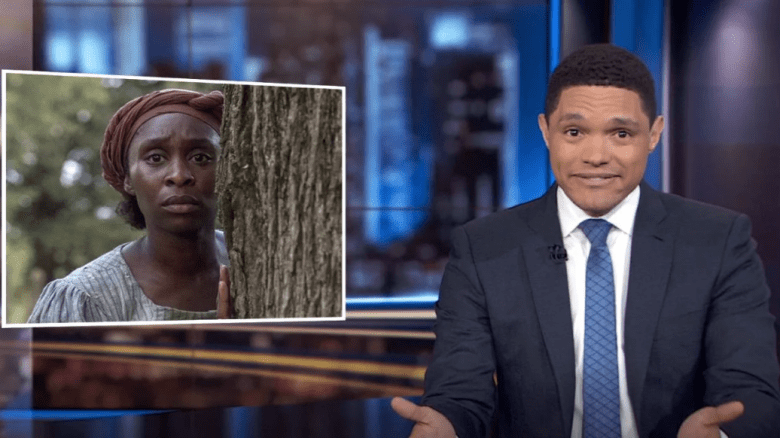 The Academy of Motion Picture Arts and Sciences is under fire this week following the announcement of the 2020 Oscar nominations, which feature only one acting nominee of color: “Harriet” star Cynthia Erivo for Best Actress. “The Daily Show” host Trevor Noah took a moment during his January 13 show to criticize the Academy for not only shutting out actors of color but for choosing also that the one actor of color to be nominated would be one who played a slave. Erivo stars in “Harriet” as former slave and abolitionist Harriet Tubman.

“I’m glad that at least one black woman was nominated for Best Actress,” Noah said. “Congratulations to Cynthia Erivo, that’s exciting. Although, it is kind of predictable that it was for playing a slave. And I’m not saying she didn’t deserve it, but just imagine if every white actor that was nominated got it for playing a supervisor at Whole Foods. White people, you’re more than just that!”

The Academy has a controversial history of nominating and awarding black actors only when they are playing oppressed characters such as slaves, maids, and addicts. Hattie McDaniel became the first black actor to win an Oscar for playing Mammy in “Gone With the Wind,” while other examples include Denzel Washington for “Glory,” Halle Berry for “Monster’s Ball,” Octavia Spencer for “The Help,” Mo’Nique for “Precious,” and Lupita Nyong’o for “12 Years a Slave,” among others. As IndieWire’s Tambay Obenson noted, there was no shortage of deserving actors of color in the 2020 Oscar race and yet the Academy still managed to snub all of them, from Awkwafina and Jennifer Lopez to Eddie Murphy, Nyong’o, Song Kang-ho, and more.

Trevor Noah also took aim at the Academy for shutting out women in the Best Director race. Similar to the Golden Globes, the BAFTA Film Awards, and the Directors Guild of America award, the nominations for Best Director include five men. Noah told “Daily Show” viewers he was a big fan of Greta Gerwig’s “Little Women,” and he expressed bafflement that Gerwig was snubbed for Best Director.

“I mean, where’s ‘Little Women’?” Noah said. “Personally, I loved the movie. Also, the Oscar voters loved the movie, which is weird. It’s really strange, because it was nominated for six awards, including Best Picture, Best Screenplay, two acting nominations, and somehow Greta Gerwig was not nominated for Director. How the hell does that happen?”

This Article is related to: Television and tagged Cynthia Erivo, Oscars, Trevor Noah