Embrace your inner Howard Ratner and make a deal for an instant-classic bit of "Uncut Gems" jewelry. 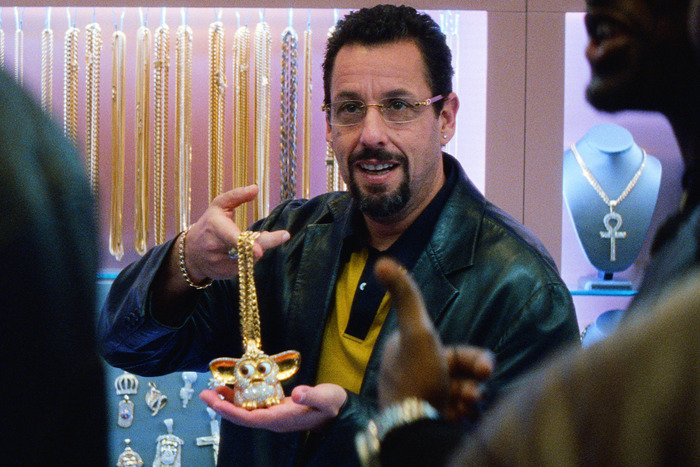 Anyone who watches Josh and Benny Safdie’s “Uncut Gems” walks away wanting one piece of jewelry: A bedazzled Furby pendant necklace. The Furby appears as an item for sale in the jewelry shop owned by “Uncut Gems” protagonist Howard Ratner, played in a virtuoso performance by Adam Sandler. The marketing geniuses at A24 celebrated the film’s release by putting up a real blinged-out Furby pendant for sale, complete with Australian crystals and gold-plated stainless steel. The Furby sold out on the A24 shop website, but in a move straight out of Howard Ratner’s playbook the Furby necklaces are being resold on eBay for nearly three times the price. A24 was selling the Furby necklace for $250, but eBay users are fielding offers for nearly $1,000.

Josh Safdie told Vulture shortly after “Uncut Gems” opened in select theaters that creating the Furby pendant was a natural extension of Howard’s character. “Like any prop or piece of set design or costume, everything originates and moves from the character,” the filmmaker said. “So you have to ask yourself, ‘When was Howard popping? What’s gonna be a real trophy piece for him?’ And Howard was popping in the ‘90s. He had this vision that he was going to take pop culture and encrust it with diamonds and gold, and make his stamp on the industry that way.

The task of creating the pendant fell to “Uncut Gems” prop master Catherine Miller. “Josh came to my desk and placed a four-inch blue plastic Furby toy in front of me,” Miller remembered. “He said, ‘This is the Furby we need you to make the necklace from.’ I told him my plan was actually to make the pendant half an inch high. He just shook his head at me and said, ‘No, it has to be this exact size.’ I paused calculating in my head just how heavy a 14-carat diamond-encrusted four-inch pendant was going to weigh, and just looked up, smiled, and said ‘Okay!’”

“Uncut Gems” is about to cross the $40 million at the U.S. box office, easily making it the top grossing film of the Safdie brothers’ career and one of the biggest A24 releases in history. Sandler recently accepted the Best Actor prize from the National Board of Review, while Josh and Benny Safdie were named the best directors of 2019 by the New York Film Critics Circle. “Uncut Gems” is now playing in theaters nationwide.