Sandler called the Indie Spirits "the 'best-personality' awards of Hollywood." 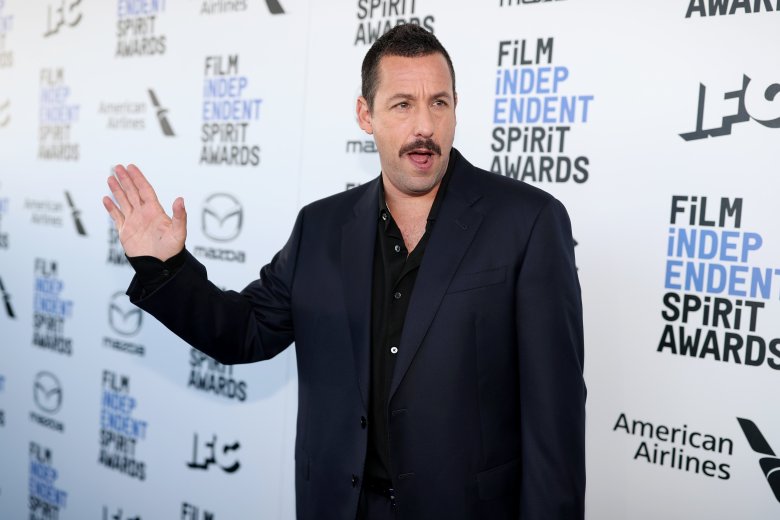 Fans of Josh and Benny Safdie’s nail-biter “Uncut Gems” have been eager to see Adam Sandler lauded for his performance as scumbag bling jeweler Howard Ratner since one of the earliest screenings of the film at the Toronto International Film Festival, where an audience member yelled “An Oscar for Sandman!,” creating a refrain repeated throughout awards season. Despite all the acclaim for his performance, Sandler didn’t land an Academy Award nod. But on Saturday he received a redemption of sorts when he won an Independent Spirit Award for Best Male Lead.

In his acceptance speech, Sandler went into character, as he previously did when introducing the Safdies at the New York Film Critics Circle Awards, offering a self-aware reflection on what it meant for him to win.

“Hello my name is Adam Sandler,” he began in the goofy voice he would use for duration of the speech. “Thank you. I stand before you trembling with glee as I receive your so-called best actor trophy independently speaking, of course. First off, it’s great to see our host Aubrey Plaza again. Aubrey and I did a move entitled ‘Funny People’ 11 years ago, that was actually the last time critics pretended not to hate me for five fucking minutes.”

Sandler’s early career hits like “The Waterboy” and “Happy Gilmore,” defined by the kind of fratboy antics he was channeling in his Indie Spirits speech, never pleased critics. But in recent decades he’s taken on dramatic roles beginning in 2002 with Paul Thomas Anderson’s “Punch-Drunk Love,” in 2009 with Judd Apatow’s “Funny People,” two years ago with Noah Baumbach’s “The Meyerowitz Stories,” and most recently with “Uncut Gems,” which brought him as close to an Oscar nod as he’s ever been.

That didn’t happen, but Sandler did best four other nominees at the Indie Spirits: Chris Galust (“Give Me Liberty”),  Kelvin Harrison Jr. (“Luce”), Robert Pattinson (“The Lighthouse”), and Matthias Schoenaerts (“The Mustang.”)

I’d like to also give a shoutout to my fellow nominees who will now and forever be known as ‘The guys who lost to motherfucking Adam Sandler,'” he said during his speech.

Sandler likened the Academy snub to high school yearbook superlatives. He said he didn’t win the prestigious honor of “Best Looking.” That went to a “jean jacket wearing feather-haired douchebag named Skipper Jenkins,” but he did win a lesser award.

“My classmates did honor me with the admittedly less prestigious Best Personality award,” Sandler said. “As I look around this room, I realize the Independent Spirit Awards are the best personality awards of Hollywood.”

Backstage, Sandler took a few questions from members of the press. He said “Uncut Gems” was a script he couldn’t put down. But he didn’t know how stressful it would be to watch until he watched the movie — that was the magic of how the Safdies put it together.

“I didn’t know it was going to be so stressful until I watched it,” he said. “I knew script-wise it was really interesting and I felt nervous for the guy (Howard).”