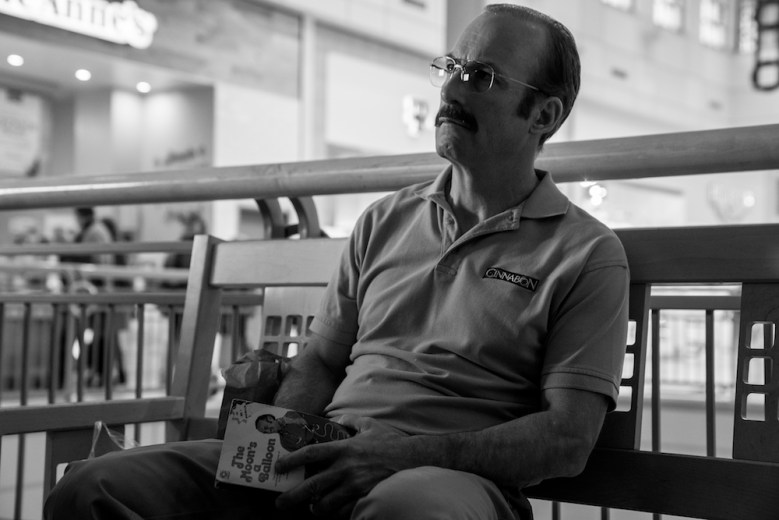 We’ve entered the dark times on “Better Call Saul.” Vince Gilligan and Peter Gould’s prequel to “Breaking Bad” has always been one of the more heart-wrenching tragedies on television, but following his brother’s suicide and the permanent, embittering effect it had on Jimmy McGill (Bob Odenkirk), any hope for a happy ending has vanished. Nuanced characters and morally gray circumstances allowed viewers to hang onto pipe dreams for nearly four seasons; fueled by true romance and good intentions, it was easy to pretend the scrappy attorney’s endearing love life and upstanding law practice could go on forever.

Not anymore. At the end of Season 4, Jimmy became Saul Goodman; he embraced the name and everything attached to it. Now, the slippery slope has become a waterfall, and it’s harder than ever to watch Jimmy come tumbling down.

Metaphors aside, Season 5 is literally tinged with darkness. DP Marshall Adams’ frames include more attached shadows and sharper edges, using the sun-baked Albuquerque desert to create added menace through contrast. Especially in the premiere (directed by Bronwen Hughes), Saul Goodman’s signature clashing suits, shirts, and ties do little to brighten up the mise en scéne; rather, they serve as a reminder of lost merriment — the man who dressed in the respected attorney’s uniform still believed he could become a respected attorney; the man who dresses as a clown believes he’s going to be laughed at anyway, so why not treat the world like one big joke?

But Season 5 isn’t about a singular transformation — no one is happy. Throughout Season 4, Jimmy’s recalcitrant attitude linking the law to his brother allowed for a faint slimmer of hope; once he gave in and grieved the latter he could properly embrace the former. Just like Kim (Rhea Seehorn), we waited with bated breath for that breakthrough moment, and when it finally came — during Jimmy’s “sincere” appeal to get his lawyer’s license back — it turned out to be a lie. There’s no denying it anymore. This isn’t a phase of Jimmy’s grief; it’s who he is. 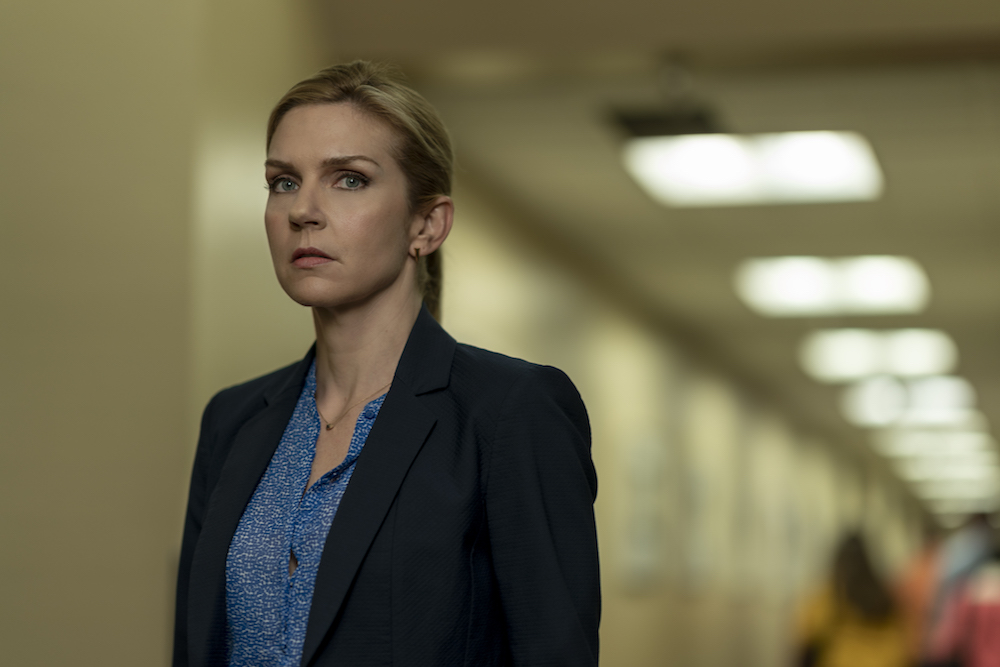 How Kim wrestles with Jimmy’s new identity is a compelling process all her own. The first shot of Season 5 (after the traditional flashforward to Jimmy’s current struggles as Cinnabon manager “Gene”) picks up right after “It’s S’aul Good-man!” with Kim chasing her boyfriend down to check on his name change. From there, Kim’s principled outlook on the law continues to shift. Can she still invest in the cons she and Jimmy carried out to help her clients, or do those seemingly justified verdicts need to be reexamined after realizing who Jimmy’s become? And who has she become because of him? In falling for him, did she fall with him?

Seehorn remains a fierce, thoughtful onscreen presence, imbuing her conflicted attorney with self-awareness. Typically, Kim thinks through a decision and then chooses to make it, as opposed to her compulsive, first-thought paramour — that doesn’t mean she always chooses correctly, but thanks to Seehorn, we can see the gears turning, hear almost zero exposition, and understand each choice with surprising clarity.

Similar praise deserves to be heaped on Michael Mando’s turn as the tortured second-in-command/spy, Nacho Varga. Things aren’t any better in Season 5 for the Salamanca’s drug dealer — in fact, things have been getting worse and worse every year for Nacho. His stoic demeanor is necessitated by his volatile work environment, but each year, Mando lets a little more panic crack through. By now, it’s as though he knows there’s no way out. Serving as Gus’ double agent while Lalo Salamanca (Tony Dalton) tests his trustworthiness, Nacho focuses on doing what he’s told and saving his family. 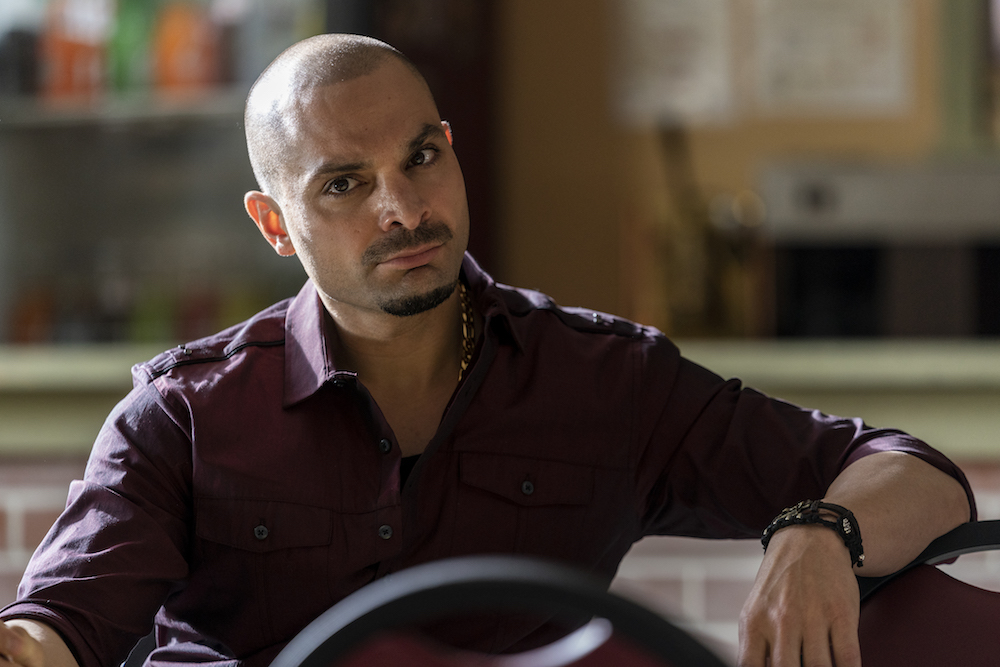 If Nacho is terrified of what’s about to happen, Mike (Jonathan Banks) is reeling from what he’s already done. Torn apart after executing the innocent but careless German engineer Werner Ziegler (Rainer Bock), Mike can’t stop taking his frustrations out on the undeserving, himself included. Even after four episodes, it’s hard to imagine what sets Mike back on track to become the reserved and responsible cleaner we meet in “Breaking Bad” — but something must.

Even with all that despair, wanting to resolve the two shows’ converging timelines is just a small part of what makes “Better Call Saul” worth watching. Thanks to the flashforwards, which have confirmed Jimmy’s lonely future from the start, everyone knows what’s coming. There’s no doubt this is a tragic arc, told through smart, passionate scripts and captured with wily, inspired camerawork. The cast is as outstanding as any on television, and the dedicated expertise of everyone involved — from Odenkirk’s delightful deceptions and stripped bare confessions to the stark New Mexico plains and the unique details that define their occupants — come together for hours of arresting storytelling.

All of these consistently astonishing formal touches combine to create a value that outweighs the pain. Yes, “Better Call Saul” is a double-edged sword of reward and loss, but it isn’t too sad to watch because you’re too invested to look away. If you’ve come this far with Jimmy, you have to see his journey through to the end, whether that end is with Saul, Jimmy, or Gene. Maybe it’s a long con. Maybe the looming darkness in Season 5 will lead to an ending in Season 6 as haunting as the black-and-white future has always been painted. But getting to know these characters was never a mistake. No matter what comes next, it’s all good, man — really.