A24 cleaned up with seven wins, making up for their light showing at the Oscars. 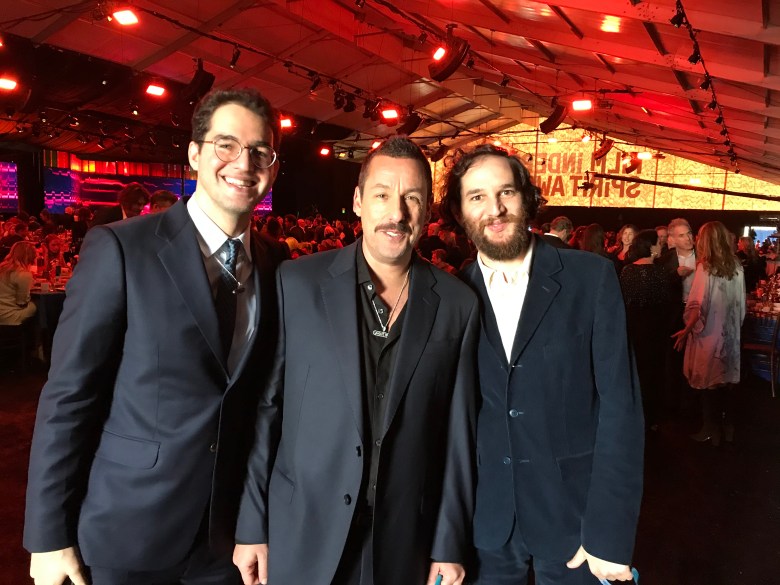 This year, in the chilly tent in Santa Monica the day before the Oscars, the Independent Spirit Awards went really indie. That meant that several high-profile contenders who did not land Oscar nominations scored Spirit sympathy votes. A24 dominated the field with seven Spirit Awards over three films, making up for their light showing at the Oscars.

“The Lighthouse” started off winning two awards for mustachioed veteran Willem Dafoe and cinematographer Jarin Blaschke, followed by three for the Safdie brothers’ “Uncut Gems,” for Directing, and Editing and Adam Sandler — who scored two big standing ovations and brought down the house with his hilarious speech. “The Indie Spirits are the Best Personality award,” he said.

“Being an editor I am going to try and cut this short,” said Benny Safdie. “The two of us working together we always try to stay in sync.” Editor Ronald Bronstein said that working with the Safdie brothers on “Uncut Gems” was “just anxiety all the time. The three of us share an abiding fear of boring the viewer. At what point does someone who doesn’t want to bore you become a menace?”

Lulu Wang’s “The Farewell,” Shot in Mandarin and English, pulled out two upsets, for Supporting Female Zhao Shuzhen, who was trapped in China due to the coronavirus, and the big one, Best Feature, beating out “Uncut Gems” and Noah Baumbach’s Best Picture Oscar-nominee “Marriage Story.” Wang first attended the Spirits in 2013 with Film Independent’s Project Involve. “For all of the filmmakers out there you can do it,” she said. “There are lots of women making films. Just give them the fucking job. Give them the money!”

Of the A24 films, only “The Lighthouse” scored an Oscar nod, for Best Cinematography, and will likely lose to Roger Deakins for “1917.” 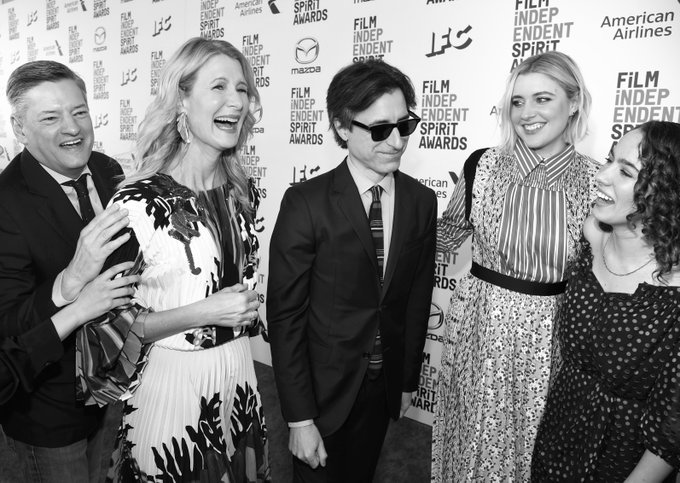 “Marriage Story” at the Spirits

“It’s a great privilege to do something you love but I kind of hate writing,” Baumbach said. “This is my tenth movie — you’d think it would get easier, but no.” He also thanked his muse Greta Gerwig, whose film “Little Women” was too expensive for the Spirits. “You’re amazing, my inspiration in everything.” Netflix took home three wins besides the Altman Award, for the “Marriage Story” Screenplay, Best First Screenplay “See You Yesterday” and Best Documentary “American Factory.” Ohio filmmakers Julia Reichert and Steven Bognar got backing from both Netflix and the Obamas and are the frontrunners in the documentary Oscar race.

In the Supporting Female race, for the first time featuring all women of color, many expected front-row-center attendee Jennifer Lopez to take home the Spirit for Oscar-snubbed “Hustlers,” but she had to settle for her recent Super Bowl triumph.

Baumbach not only collected Best Screenplay — thanking Best International Feature winner Bong Joon Ho (“Parasite”) for not competing in his category — but also the Robert Altman award for ensemble cast; Adam Driver was a no-show. While Oscar frontrunner Laura Dern wasn’t nominated for Supporting Female, as consolation she was lauded several times during the show for being the only person to attend the first-ever Spirit Awards, for “Smooth Talk,” as well as the 2020 show with “Marriage Story.” She danced along as the Gay Men’s Chorus sang a tribute to her, in gorgeous full-throated harmony: “Laura Dern, Laura Dern, Laura Dern!” 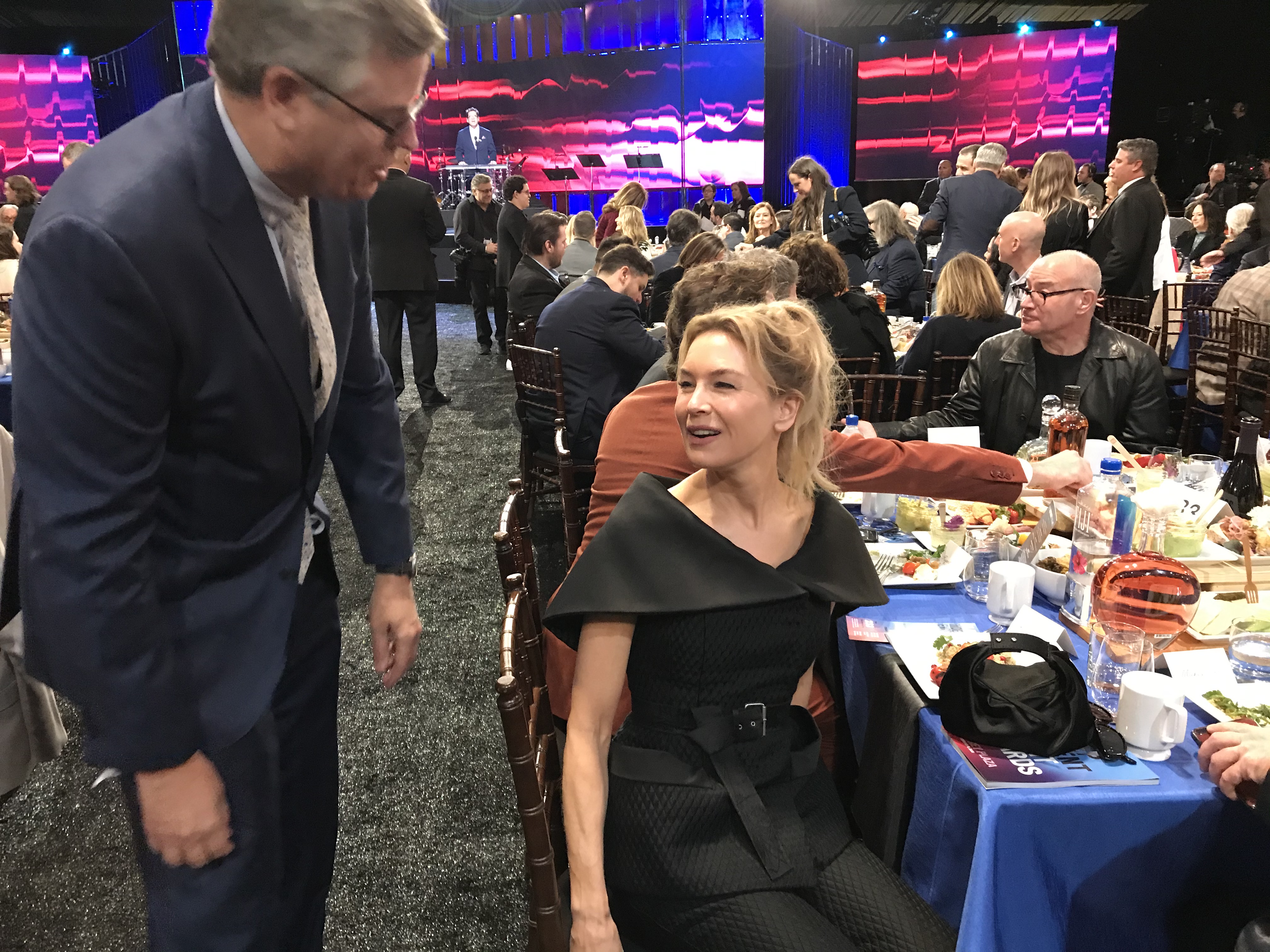 Dern has swept the other awards this season, and is still likely to pick up the only win for “Marriage Story” at the Oscars. Renee Zellweger inevitably collected the Indie Spirit for Best Lead Female for playing aging chanteuse Judy Garland in “Judy,” her first win after three Spirit nods, remembering coming to the tent in 1995 with “Love and a .45.” “I left with a sunburn,” she said. She will undoubtedly accept the Oscar on Sunday. The last actress to sweep so many Oscar precursor awards — Golden Globe Drama, Critics Choice, SAG, BAFTA, and the Spirits — was Julianne Moore, for “Still Alice.”

The Best First Feature Spirit Award went to Olivia Wilde’s “Booksmart.” Big cheers erupted in the house as the cast hit the stage. “First features happen because someone believed in your crazy idea,” said Wilde amid enthusiastic applause.

The room let out a roaring standing ovation for Bong Joon Ho as he took the stage for another gently humorous acceptance speech. He wondered, at an early New York “Parasite” screening, if a scurrying rat in the theater “was a symbol of luck.” It’s the kind of welcome he’s been getting all season, and “Parasite” and its Oscar chances were the dominant subject of conversation at the Spirits. “I’m going to the ‘Parasite’ after party, which I’m actually more excited about than the Oscars,” declared one Indie Spirit attendee during pre-show cocktails. If the Spirits’ warmth for Director Bong repeats on Sunday, it will be one hell of a celebration.

Some 7,000 Film Independent members voted for the 2020 Spirit Awards, which are listed below.