Berlin: Ilya Khrzhanovskiy's first film from his sprawling "DAU" experiment is thought-provoking and terrifying at once. 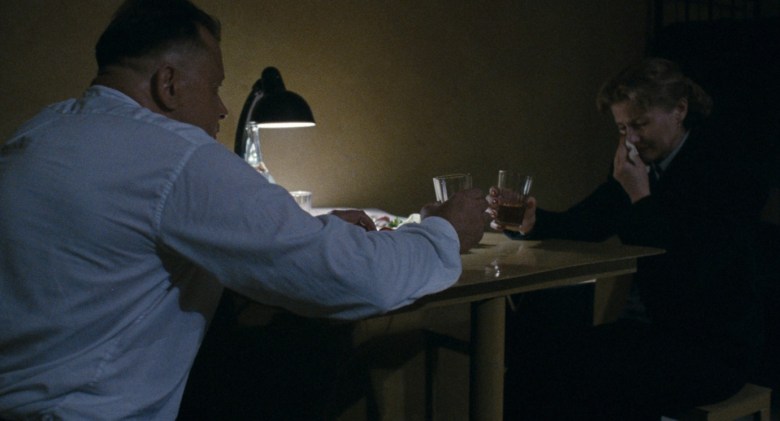 “DAU. Natasha” has no credits to explain the wild concept behind its existence, but context is everything. The sophomore feature from Russian director Ilya Khrzhanovskiy follows his well-received 2004 debut “4,” but this is the rare case of an extensive delay that makes complete sense. The movie takes the form of a sexually explicit drama with a jarring Orwellian turn in its final act, and ends with a harrowing sexual assault, but the circumstances behind the scenes deepen the queasy intrigue that has defined the life of this project for more than a dozen years.

Khrzhanovskiy initially set out to make a traditional biopic of Soviet-era physicist Lev Landau, but the production later transformed into an epic installation piece, and eventually the most ambitious filmmaking experiment in history. The filmmaker built a sprawling 42,000-square-foot set in Kharkiv, Ukraine, and cast some 352,000 people to live 24 hours a day in a meticulous recreation of a Soviet science institute. Ordinary people lived in full character, held normal jobs, and even used period-appropriate currency — and faced repercussions from on-set authorities if they deviated from routine.

English-language media has speculated about Khrzhanovskiy’s outrageous experiment for years, with one headline calling it a “Stalinist Truman Show” and a GQ profile from 2011 exploring the make-believe tyranny as “The Movie Set That Ate Itself.” Except it didn’t.

Khrzhanovskiy and his sprawling team littered microphones throughout the set and roamed the premises with a 35mm camera, developing mini-narratives as the years stretched on. That footage first yielded elaborate exhibitions in Paris and London, but its next phase is more accessible. “DAU. Natasha” marks the first of more than a dozen completed features that will emerge from the project. (It premiered in the Competition of the 2020 Berlin Film Festival, and a five-hour miniseries screened in another section.)

The background invites all kind of scrutiny, from its moral compass to the broader intent, but the most intriguing conclusion from “DAU. Natasha” is that it works well enough on its own to justify the potential of future installments. Khrzhanovskiy, who shares a directing credit on the 145-minute feature with “DAU” hair and makeup designer Jekaterina Oertel, has devised a filmmaking method that combines deep-dive method acting with a horrific twist on reality TV, but you wouldn’t guess any of that from watching “DAU. Natasha.” Instead, the movie unfolds as an unsettling slow-burn character study about the oppressive reality this experiment was designed to create. The ’50s-era plight of Natasha (Natalia Berezhnaya, a newcomer like the rest of the cast) begins as a poignant story of friendship and sexual discovery before careening into a devastating finale.

Just as she did during her months at the Institute, Berezhnaya plays a woman who runs the local pub, where various scientists relax across long days in between complex experiments that anyone without a PhD in physics is unlikely to comprehend. Early on, we see real-life engineer Alexei Blinov (who died last fall) giddy with excitement as he and visiting French biochemist Luc Bigé develop a technology to increase workplace productivity. (For all we know, there’s more insight into this research in other “DAU” installments.)

The fruits of their labors might actually come in handy for the fortysomething Natasha, as she contends with her free-spirited younger co-worker Olga (Olga Shkabarnya). The pair maintain an amusing love-hate relationship as they trade stories about their lonely lives and passing romances, but the power dynamic between them is in constant flux. After a prolonged conversation about love and companionship at the end of a long day, the pair wind up in a prolonged physical brawl when Olga refuses to clean up, and the result verges on slapstick. Though its focus on one woman’s banal routine might suggest the shadow of “Jeanne Dielman,” the movie actually begins as a pitch-black buddy movie before moving in a far bleaker direction.

Nevertheless, a deadpan playfulness looms over the movie’s early passages, as Natasha joins Olga for a late-night drinking session with the scientists where the booze keeps coming and Natasha develops an attraction to Luc, who eagerly embraces her overtures despite the language barrier between them. Khrzhanovskiy and cinematographer Jürgen Jürges stay close to their subjects, using a delicate handheld approach that feels naturalistic but never entirely documentary-like. That approach takes on more erotic connotations when Natasha and Luc end up sleeping together, in a graphic, unsimulated sex scene that drags on for several minutes. (Not since “Blue is the Warmest Color” premiered at Cannes has a hookup been designed to provoke such debate.)

However, the sex in “DAU. Natasha” has been shot and edited to play up the intimate bond these strangers share, and the result comes across less in pornographic terms than affectionate ones. More importantly, it leaves a giddy Natasha experiencing the kind of warmth that earlier scenes suggested she would never comprehend. That degree of emotional depth makes “DAU. Natasha” compelling enough, but it also leaves viewers blindsided by what comes next. After a heartbreaking return to her ordinary life, Natasha must reckon with the forces that govern her every move when KGB agent Vladimir (Vladimir Azhippo, apparently an actual ex-KGB agent) calls her in for a harrowing interrogation that becomes dehumanizing as it goes along. Pressed to answer for charges of sleeping with a foreigner, Natasha’s subjected to a series of cruel maneuvers, culminating with forced penetration in a moment doomed to be forever known as the notorious “bottle scene.”

Does “DAU. Natasha” cross ethical lines? It’s impossible to fully assess that question based on the material onscreen, but certainly the movie captures an astounding performative achievement by its lead. Despite all the degradation thrust upon her, Natasha — apparently reacting to these developments on the fly — makes a valiant attempt to take control of the interrogation, and then does her best to return to work. It’s a dizzying experience to watch her endure the abuse to the best of her ability, and leaves one with the impression that the “DAU” experiment actually mustered some measure of time travel, providing an exacting window into the way Soviet rule crept into even the most personal aspects of daily life.

Needless to say, as the first of many “DAU” projects unleashed in this format, “DAU. Natasha” makes a helluva first impression. Early transmedia theorists argued that any story told across multiple platforms must work on its own as well, and the movie certainly does that. At the same time, there’s a lingering sense that the restrained narrative style underserves the overarching nature of the experiment; it’s an immersive small-scale drama that, on its own, doesn’t make the case for its own extensive production history. “DAU. Natasha” is haunting and effective, but not always the sum of its parts, and sometimes has a tendency to drag.

Even so, the spell lingers long after the credits roll, and the opportunity to consider the many sides of “DAU. Natasha” is a unique intellectual exercise. One leaves the experience with a profound desire to learn more about where it came from and everything that didn’t make the cut. Yet Khrzhanovskiy has captured his subject with such realism that we might be careful what we wish for. The scariest aspect of “DAU. Natasha” is not how it ends, but the impression that some aspect of it never truly will.

“DAU. Natasha” premiered in Competition at the 2020 Berlin Film Festival. It is currently seeking U.S. distribution.