Critics absolutely hated Blumhouse's latest. Here's some of their worst. 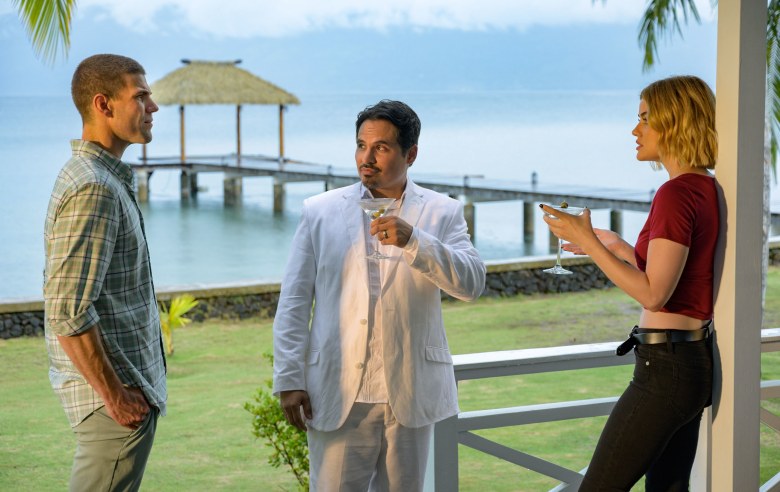 Another day, another reboot. While some remakes earn wide acclaim — the American version of “The Office,” “A Star is Born” — “Fantasy Island” did not. The Jeff Wadlow-directed movie is a 2 1/2-hour-long horror take on the 1970s ABC fantasy series, and it’s currently rocking a 9% from critics on Rotten Tomatoes.

When a movie this awful comes around, film writers often find themselves inspired to respond in kind. And here, the film did not disappoint.

Guys, Fantasy Island might just be one of the worst movies I have ever seen. Oh my fucking god. I’m actually in shock.

Reviews point to a vibe of sheer desperation for viable IP that permeates the dull reboot and an inability for the movie to find its tone: Is it horror? Drama? Comedy?

Funnier than anything in FANTASY ISLAND: The critic who turned to me immediately afterward and asked, “Are you sure you want to stay in this business?”

Spencer Perry in his 1/5 review for Comicbook.com offered this:

If Fantasy Island is lucky enough to be remembered in a year’s time, it’s because it will forever be known as a great example of “cheap, uninspiring horror movie made to cash in on teenagers with extra money, using an old IP as window dressing.”

IndieWire’s own David Ehrlich, who gave the film a ‘D’, said the Fiji location gave the film’s best performance:

Dumb in ways that range from inane to insulting, but always growing duller by the minute, this new “Fantasy Island” is only a few minutes old before your greatest wish is to be watching literally anything else.

Rolling Stone’s Peter Travers opened his review with this:

If crimes against cinema merited prosecution, Blumhouse’s ‘Fantasy Island’ would go directly to death row… A machete-wielding psycho, played by Michael Rooker, runs around the island connecting the stories, and trying to chop everything to bits. Is he the real author of the screenplay?

Writing for the Daily Beast, Kristen Lopez offered a more humanistic critique. She examined the legacy of one of the series’ most memorable characters, Tattoo, played by French actor Hervé Villechaize, who had dwarfism.

“Erasure looks to be part of Villechaize’s legacy today with the release of Blumhouse’s ‘Fantasy Island’ wherein his character is little more than a reference: a literal tattoo of the name ‘Tattoo’ on the chest of an able-bodied actor. This continues Hollywood’s legacy of erasing what few opportunities might exist for a disabled performer.

It’s tough to find a good review; even the most positive ones are far from raves. Jesse Hassenger at Polygon agreed with many other reviewers in writing the film was “disposable,” but focused more on the “fun.”

“Fantasy Island” knowingly steals from everywhere, and sometimes cleverly incorporates its derivativeness into the filmmaking. JD and Brax go to a party with the saturated colors (and tan lines) of a McG music video from 1999. Patrick’s military adventure has a desaturated war-movie palette. Melanie’s torture fantasy has the bleachy, grimy look of a ‘Saw’ movie. Different sections of the island exist in different genres, which eventually misfire and cross over into each other’s space.

However, a film this bad does come with its own silver lining: Perhaps it’s so wretched that it could rise — or sink — to the level of midnight-movie madness. Make room, “Cats.”

Fantasy Island deserves to gain a following among that of The Room and The Happening. Seriously, guys, this movie is something special. It’s a spectacular disaster that I adored. It’s so bad that it’s a blast. My friends and I LOVED it. #FantasyIsland pic.twitter.com/NYRvoMvfJU

And then again, what do we know? Even with all of the film critics who called for its head, “Fantasy Island” made it to #3 at the box office, with $12.4 million on a $7 million budget. Hollywood has made sequels on lesser results.

This Article is related to: Film and tagged Blumhouse, fantasy island