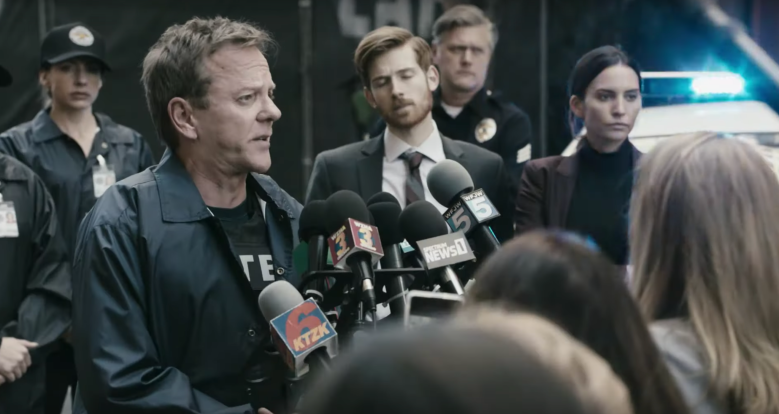 Created by longtime Hollywood and Silicon Valley power players Jeffrey Katzenberg and Meg Whitman, upcoming streaming platform Quibi will launch soon, on April 6. One of its flagship series is “The Fugitive,” from “Scorpion” creator Nick Santora. Check out the first teaser for the upcoming series below.

“The Fugitive” remakes the classic 1960s TV series, which previously spawned a film version in 1993 that won Tommy Lee Jones the Best Supporting Actor Oscar. In Quibi’s version, blue-collar worker Mike Ferro (played by Boyd Holbrook) is wrongly pinned for a Los Angeles metro bombing, and he’s forced to take the investigation of the real culprit into his own hands. But he’s up against detective Clay Bryce (Kiefer Sutherland), who’s targeting Mike amid a city riven by panic and fake news as Mike’s life and rumored complicity in the crime become media fodder.

If this first look is any indication, being the subject of a nationwide manhunt equates to a lot of stress. The series also stars Tiya Sircar, Daniel David Stewart, and Andy Buckley.

The kicker with Quibi is that each episode runs under 10 minutes, making it the destination platform for “quick bites” and ergo limited attention spans. As IndieWire’s Chris Lindahl reported out of this year’s Sundance Film Festival, “For the uninitiated, Quibi serves up short-form content — movies broken into chapters and an array of scripted and non-scripted series, all with runtimes of 10 minutes or less — that’s meant to replace scrolling through Instagram in line at Starbucks or falling into the dread of Twitter in the dentist’s office waiting room.”

An ad-supported Quibi subscription will cost $4.99 per month, while an ad-free subscription will cost $7.99 per month. According to a recent keynote with Katzenberg and Whitman, the service will release around 175 series within its first year (in 8,500 installments), which they say equals about three hours of new content every day. The service has already attracted more than a billion dollars in investments, including from Disney and other studios.

Other soon-to-come Quibi series include “You Ain’t Got These,” an unscripted show from “The Chi” creator Lena Waithe, “Elba vs. Block” with Idris Elba, “Chrissy’s Court” with Chrissy Teigen, “Thanks a Million” with Jennifer Lopez, and the revival of “Reno 911!” among many others.

Here’s the first teaser for “The Fugitive.”

This Article is related to: Television and tagged quibi, the fugitive, TV News