The disgraced former movie mogul is now a convicted rapist, but his troubles are only beginning. 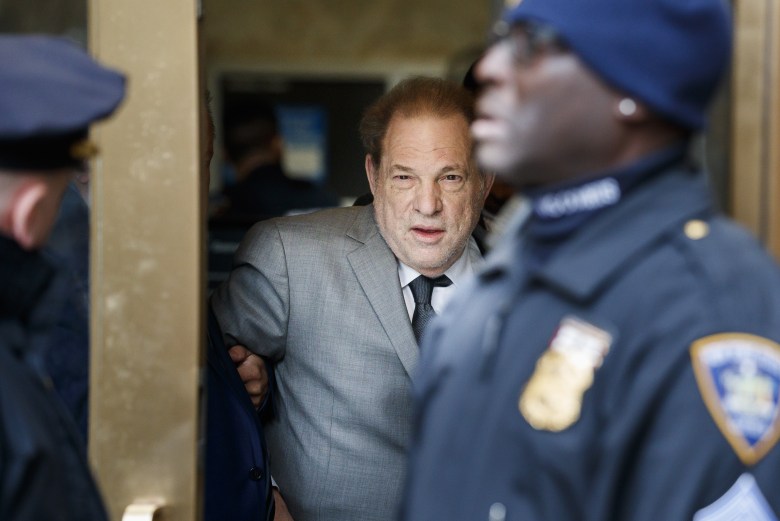 More than two years after a pair of exposes outed Harvey Weinstein as a serial sexual abuser and brought global awareness to the #MeToo movement, the former movie mogul was found guilty of rape in the third degree and criminal sexual acts in the first degree in a Manhattan courtroom. On February 24, the ousted Weinstein Company head went from “alleged assailant” to “convicted rapist,” with a pair of guilty verdicts that could see Weinstein in prison for the rest of his life.

The New York trial covered five criminal counts, including two of predatory sexual assault, one involving Haley and actress Annabella Sciorra, the other count involving Sciorra and Jessica Mann. In addition to the predatory counts, Weinstein was charged with one count of criminal sexual assault (against Miriam Haley), and two counts of rape (one in the first degree, one in the third, both involving Mann). The verdict found him guilty of sexually assaulting Miriam Haley at his Soho apartment on July 10, 2006, while the third-degree rape charge involved his assault of aspiring actress Jessica Mann at a DoubleTree Hotel in New York on March 18, 2013.

With sentencing on the horizon and a number of other cases — both criminal and civil — still being waged against Weinstein, there’s still plenty left to unfold in this horrific chapter of Hollywood history. Here’s what’s next for Weinstein.

Weinstein was immediately remanded into custody after the ruling, with the former TWC head taken out of the courtroom in handcuffs at the conclusion of his trial. While Weinstein was initially bound for Rikers Island, where he was expected to stay until his sentencing in the coming weeks, the ambulance carrying Weinstein was diverted to Bellevue Hospital to care for reported heart palpitations and high blood pressure. Two days later, Weinstein remains at Bellevue. Per CNN, “There is no update on when Weinstein will go to Rikers. He is very secure but is not handcuffed to the bed, according to [his attorney Arthur] Aidala.”

When Weinstein is released from the hospital, he is still expected to head to Rikers Island to await sentencing. Aidala told CNN that Weinstein’s legal team members “are working on bail pending sentencing and on bail pending appeal — a two-prong approach” in hopes that they could keep Weinstein out of jail in the interim between conviction and sentencing. Weinstein was out on bail during the trial, though he was ordered to wear an ankle monitor. In December, Weinstein’s bail doubled after allegations that he “mishandled” the monitor.

Judge James Burke scheduled Weinstein’s sentencing for March 11. The convictions in the cases of Haley and Mann could see the former movie mogul spending the rest of his life in prison, as the minimum sentence for a criminal sexual act in the first degree is five years, with a maximum of 25. While there is no minimum prison sentence for third-degree rape, the maximum is four years. Judge Burke also has the power to impose a greater sentence on Weinstein, should he choose; he will also determine if the sentences will be served concurrently or consecutively.

Before sentencing is officially handed down, both Weinstein’s lawyers and the prosecutors will submit arguments for what they believe his sentence should be. Vulture reports that “Weinstein’s team could submit ‘character letters’ in support of him in their bid for a less serious sentence. Weinstein’s victims can also submit statements in writing.” Additionally, “probation officials will prepare a ‘pre-sentence report’ for Burke to consider [that] will include background information on Weinstein, such as his professional and family life — as well as information regarding what he was convicted on and allegations against him.”

Weinstein’s victims might also be able to speak during the sentencing, delivering “victim impact statements” to the court. It is yet to be announced if that will occur on March 11.

CNN reports that Weinstein’s lawyers intend to appeal the conviction, but New York state law decrees that appeals cannot be filed until sentences are issued. Weinstein’s legal team might attempt to move up the sentencing date to fast-track the appeal process, especially if they are unable to get him out on bail in the interim. Vulture notes that “after Weinstein is sentenced, his lawyers have 30 days to file a notice of appeal — basically, a formal heads-up that they are going to fight the outcome — with a state appeals court. Following that notice, they have 120 days to file an ‘appeal brief’ — their fleshed-out argument for appeal — though the appeals court can give them an extension.”

The New York cases are not the only ones Weinstein needs to worry about. On the first day of his first trial, prosecutors in Los Angeles announced their own charges against Weinstein, including felony charges of forcible rape, forcible oral copulation, sexual penetration by use of force, and sexual battery by restraint. He has yet be arraigned on those charges, though he has denied any and all claims of nonconsensual sexual activity.

People reports that the California charges “accuse Weinstein of raping one woman and sexually assaulting another in separate incidents over a two-day period in 2013.” One of the alleged victims in the California cases, actress and model Lauren Marie Young, took the stand during the New York trial to offer her testimony, which alleges that Weinstein raped her in 2013 and 2014.

According to the Los Angeles district attorney’s office, the investigation into the charges remains ongoing.

Since a pair of damning exposes dropped in 2017, Weinstein has been accused of sexual misconduct by more than 100 women. Some of those alleged crimes fall out of the statute of limitations, and some alleged victims are pursuing civil action against Weinstein. CNN reports that “a bankruptcy court in Delaware has been handling a settlement including multiple plaintiffs, including the state of New York, several of Weinsein’s accusers and creditors. There have been multiple proposed settlements, but ultimately negotiations are ongoing. There are also several other ongoing civil lawsuits in multiple jurisdictions.”

The most publicized of all is a controversial settlement first reported by the New York Times in mid-December, which held that Weinstein and the board of the bankrupt Weinstein Company reached a tentative $25 million settlement with dozens of the women who accused him of sexual assault. If the settlement goes through, it will effectively end the majority of lawsuits leveled against him and the company since 2017, thought not any current criminal cases including the ones in New York and Los Angeles. The deal would not require Weinstein to admit any wrongdoing, or pay anything out of his own pocket; instead, insurance companies representing TWC would be on the hook for the millions.

The settlement is a complex shared payout to more than 30 actresses and former Weinstein employees who have accused the disgraced mogul of hundreds of sexually based crimes, from harassment to rape. It also includes set-aside funds for accusers who have yet to come forward. That deal is not yet finalized, and this week’s conviction would not prevent the settlement from going through.

This Article is related to: Film and tagged Harvey Weinstein, Sexual Misconduct