The crime drama lets you watch its middle eight episodes in any order, but it's more powerful as a straightforward story. 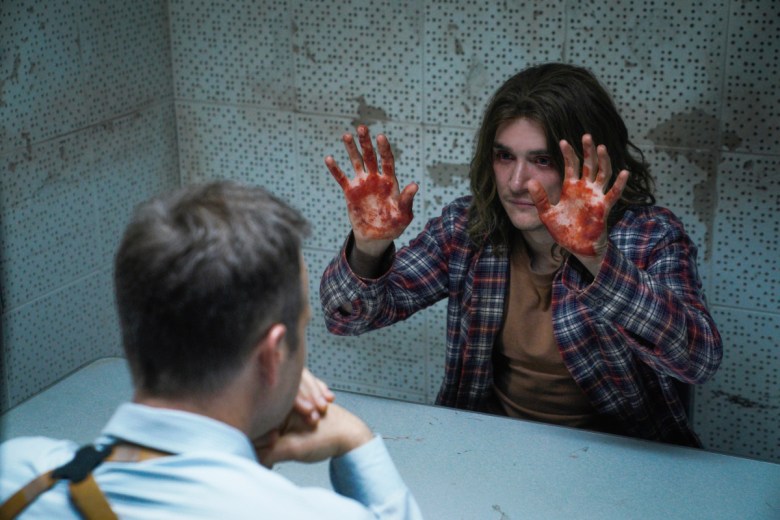 The idea of watching something “as intended” has long been elusive for curious audiences. There are the perpetual drives to “see it on the biggest screen you can” or “go in knowing as little as possible.” To that list, the new CBS All Access series “Interrogation” is trying to add “watch in whatever order you want.”

On the surface, “Interrogation” seems like an effective, familiar fictional true crime story, following a single horrific event and watching the ripples form across years and years after. In 1983, Eric Fisher (Kyle Gallner) discovers his mother stabbed and dying in the living room of her Sherman Oaks house, only to be accused of murdering her and sent to prison as a result.

After the events of the opening episode, which document Eric going through his version of events of the day in question while talking to an LAPD detective (Peter Sarsgaard), those closing credits give way to a unique on-screen mandate to follow the case as any other investigator would. In theory, it’s an innovative way to mirror the dredging up of a cold case. Eric maintains his innocence, and with his father Henry (David Strathairn) fighting for his release, you the viewer track the ancillary players in this unfolding saga however you see fit.

Giving the audience the illusion of active participation has its merits, but hopping around quickly lays bare the issues that any interactive piece of programming has had (or will have) as this corner of entertainment goes through its growing pains. There’s a fundamental issue at the core of this approach to “Interrogation”: with so many possible permutations in play, the audience’s path will never seem purposeful unless the details are so intertwined that any order carefully interlocks in different arrangements. 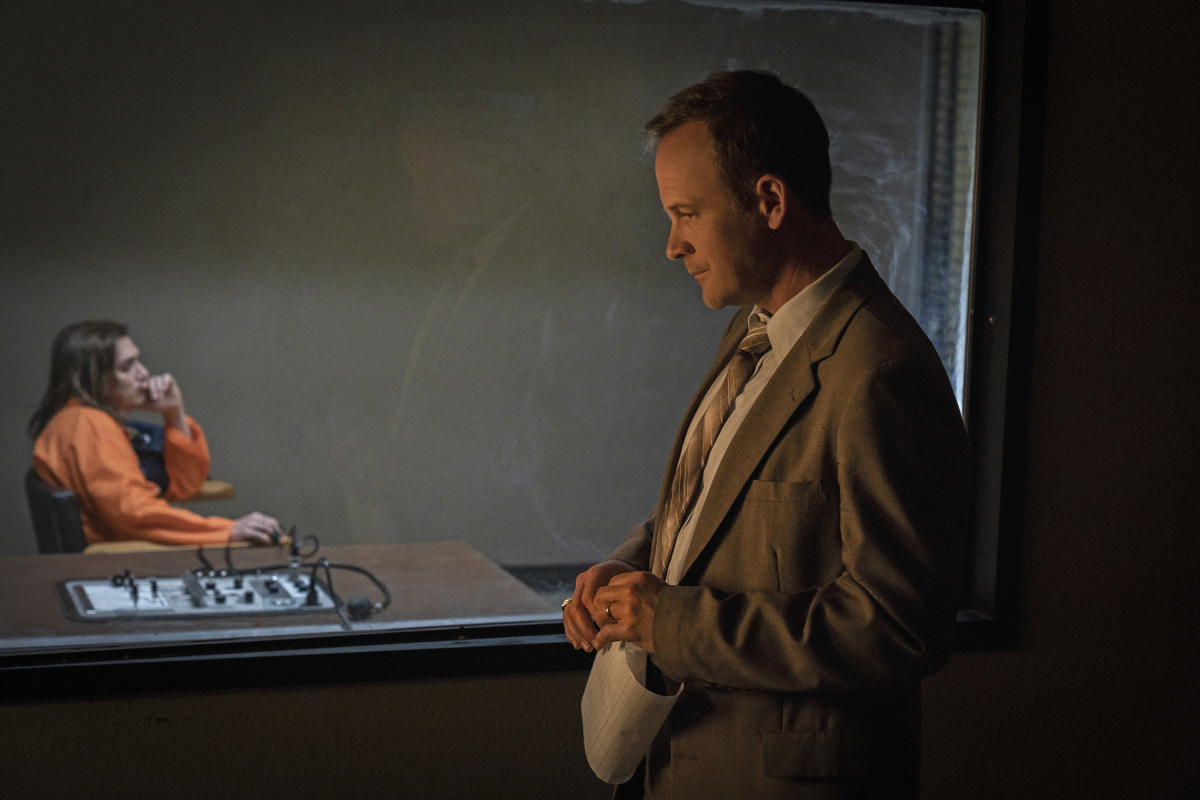 If this is a case to be solved, no one piece of information can be so crucial that stumbling on it three episodes in makes the rest of them feel redundant. And if there is some ultimate goal, some star witness that makes “Interrogation” have meaning, that was always going to be out of the viewer’s hands, regardless of where they pointed their remote on the CBS All Access app’s menu screen.

Even in the midst of this crazy experiment, “Interrogation” is still trying to preserve the sanctity of the episode, telling significant, self-contained thematic chunks of this story upwards of 45 minutes at a time. It’s an admirable feat, but one that still feels at odds with the show’s intended hook. Empowering the audience to be their own detective works if the method of getting new information is truly fractured. If there was the possibility of following specific threads and seizing on tiny details to put together an overall picture, then “Interrogation” would feel closer to a collaborative process. As it stands, these are a collection of effectively-made episodes with only the slightest bit of textual signals to make the next episode selection anything other than a random shot.

Because the story starts off with so many details left to fill in, one of the primary factors in picking that next episode is which actors you want to keep spending time with. Strathairn completists will jump to the chapter labeled “Henry Fisher.” Intrigued by a thumbnail prominently featuring Vincent D’Onofrio? You’re not alone! Maybe in order to divorce ourselves from notions of linear storytelling, we have to de-emphasize performances as a story anchor. It’s easier to truly chart a specific path from the details of a fictional investigation if you’re not rooted to a particular character subtly (or not-so-subtly) guiding you along.

So it’s there that “Interrogation” feels most at odds with itself. It has a pair of performances at its center that set a fairly high bar for the rest of 2020. As Dave Russell, the possibly-crooked detective running point on the Fisher case, Sarsgaard is a fascinating one-man Calm Cop/Bad Cop routine. Watching him pick apart the familiar tics and expected rhythms of on-screen stories like this is truly enthralling stuff. And Gallner’s decades-spanning journey as Eric Fisher himself is so effective that it’s hard to tell which way he had to be aged at any point in the production process. 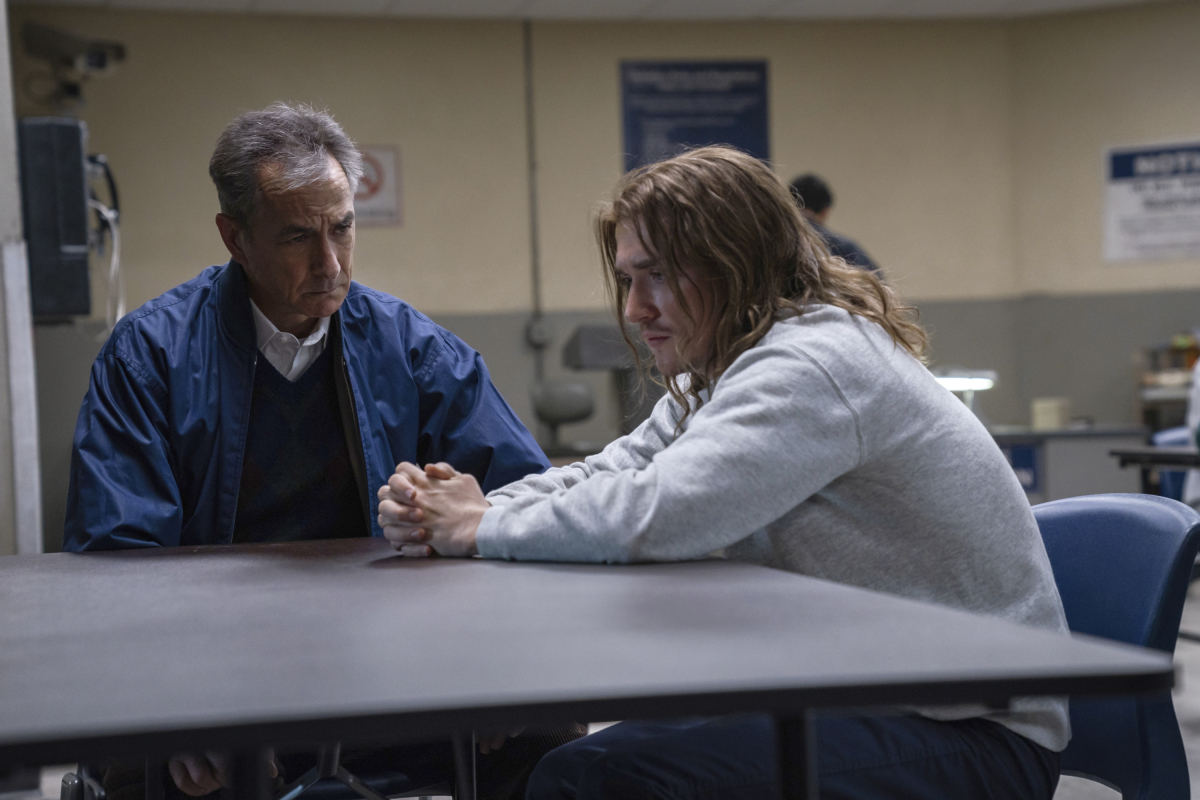 Both of those roles — along with D’Onofrio, Strathairn, and Kodi Smit-McPhee as another key player in Eric’s case — eventually benefit from seeing the strain brought on by the passage of time. As Gallner transforms from a shoulder-length-haired wayward kid to a shaved-head inmate burdened by the belief of his own innocence, it’s the weight of those ticking years that gives “Interrogation” its most power. There’s some frequent in-episode time-jumping trickery that ensures each chapter has a little bit of the past and the present (and a nod to the future) in whatever one is playing. But when the season’s closing installment starts with a chronological “Previously on” montage, it’s hard not to watch that and believe that’s “Interrogation” in its most potent form.

Otherwise, the introductions of characters we’ve already seen established into this world often feel like knowingly clever easter eggs. The interview tapes and 9-1-1 calls and testimonies that are designed to connect viewers across decades still play out like a one-way street. The first encounter with these moments are almost always more effective when you see them happen rather than experience them secondhand later. Russell is an ethically murky character, but Sarsgaard truly crackles in the show’s verbal sparring sessions. As his job duties change, it only underlines what he’s lost with the passage of time as well. Seeing Gallner play a much younger Eric’s terrified realizations makes those later backward-facing chapters all the more effective.

And then, there’s the way “Interrogation” chooses to wrap up in its final episode. The direction of guilt in its closing minutes is not the result of meticulous unpacking or some left-field unforeseen suspect. If anything, it shows how the need to keep the middle order flexible actually narrowed the list of relevant details. At the heart of “Interrogation” is an effective psychological kaleidoscope that shows how individuals in Eric’s orbit shoulder the aftermath of what happened to him. That’s a more compelling show than one filled with an endless string of red herrings and manufactured mystery. It’s strange then, that “Interrogation” tries to frame its audience’s role as a group of amateur sleuths instead of presenting each new character as a subject of observational study.

This won’t be the last time that a series will try to differentiate itself in a saturated market. It’s only a matter of time before this same “make your own middle of your sandwich” approach is applied to medical dramas, high school coming-of-age stories, or shows based on novels that have a similar fractured timeline. Inevitably, most of these shows that choose to go the “Interrogation” route won’t actually need it.

“Interrogation” is now available to watch on CBS All Access.

This Article is related to: Television and tagged CBS All Access, Interrogation, Kyle Gallner, Peter Sarsgaard