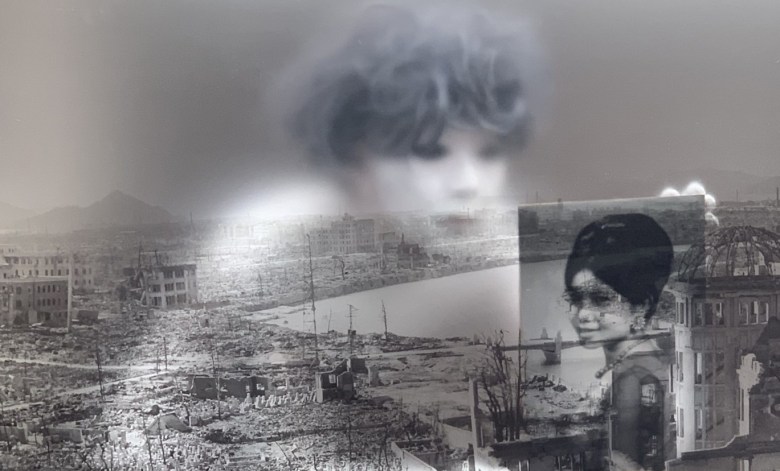 “Evil will hunt us if we don’t throw it out from us with open palms,” a disembodied voice declares to us in French at the start of “Irradiated,” Rithy Panh’s mesmerizingly bleak montage of war in the 20th century. “At the top of the sky is pain. It always comes as a surprise.” And so the great onslaught begins as the bombs rain down from the heavens and the image cracks into three perfect squares that stretch across the screen in a narrow sliver of light; together they create an anamorphic slot machine of needless suffering.

More often than not, each column shows the same snippet of archival footage, as Nazi rallies bleed into the Khmer Rouge before napalm glazes the treetops of Vietnam. Sometimes, however, the square in the center is out of sync with the two on either side; shots of a bombed out church frame the image of a woman kneeling over a freshly dug grave. The effect of the triptych is largely the same no matter how Panh chooses to arrange it: The three simultaneous images better allow you to appreciate the one, as our eyes are actively forced to sift through the horror that other depictions of organized death have normalized into wallpaper. “Look one time,” one of the narrators instructs. “Look one hundred times. You need to repeat yourself, because evil runs deep.”

A Cambodian filmmaker whose work includes the Oscar-nominated “The Missing Picture” (in which he used clay figurines to dramatize life under Pol Pot’s regime), Panh has long pursued new ways of seeing modern history’s most resonant nightmares; he’s always been desperate to reconcile the unimaginable with its absent sense of reality, and weaponize past trauma into a deterrent against the devastation to come (a line of narration from his new movie: “If you want to live, prepare for death”). Now, Panh expands his focus beyond the borders of his homeland in order to orchestrate a universal symphony of mass slaughter.

Pinballing through the 20th century with the non-linear logic of a poem, “Irradiated” cuts between its wars until they all bleed together into a self-inflicted genocide; not of any particular group of people, but of humanity itself. The film may not be enough to save us from ourselves or compel future generations to “remember” the things we couldn’t even keep alive in our own time, but — like Alain Resnais’ “Night and Fog” before it (one of several documentaries that Panh excerpts) — “Irradiated” is a gruesomely effective defense against historical forgetting.

“Abstraction leads to death,” we’re reminded, but “Irradiated” suggests that it might also cancel itself out, as the abstraction of Panh’s montage brings new life to these images. It’s a counterintuitive approach, but an effective one, as the ambiguity of the archival footage (or at least its lack of specific context) deepens the urgency of Panh’s open-hearted plea. Auschwitz victims are piled into mass graves; the people of Hiroshima are melted together beneath the Genbaku Dome; American fighter jets drop bombs the size of oil drums onto the green hills of some foreign country the pilots likely couldn’t find on a map. On its own, Panh’s triptych gives the impression that each horror is happening over and over and over again. Cut together into this ghoulish supercut, the destruction becomes like the chorus of an awful song.

Actors Rebecca Marder (“Someone, Somewhere”) and André Wilms (“Le Havre”) take turns reading the narration, which is sometimes as impenetrably poetic as the lyrics of a Godard film, and sometimes as blunt and concrete as a description of what happens to bodies in the wake of an atomic bomb. They often talk to each other like two souls in the bardo, and occasionally even turn their attention to us in order to beg the audience to keep watching. “Is it the world, or just man on fire?” Such questions lose their rhetorical softness as the film continues.

Eventually, a delicate sense of uplift wends its way into Marc Marder’s haunted score. A troupe of Japanese Butoh dancers — led by their choreographer, Bion — begin to intercept the archival footage, walking through it with ashen faces as if searching for the exit. Their graceful footsteps take them somewhere we can’t follow. Panh insists that while “evil radiates, beyond this pain lies innocence,” but there are several missing stones in the path that leads from one to the other. If “Irradiated” is able to chart a course towards peace, it’s only by insisting that every other road leads to a dead end.

“Irradiated” premiered in Competition at the 2020 Berlin International Film Festival. It is currently seeking U.S. distribution.