Douglas, a prolific producer and actor, was known for helping end the Hollywood Blacklist and for his philanthropy. 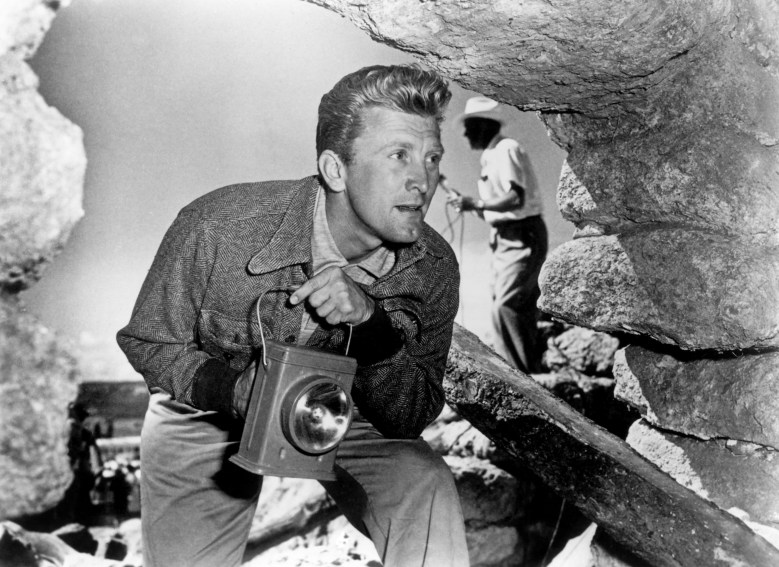 Kirk Douglas in “Ace in the Hole”

Legendary actor and producer Kirk Douglas died Wednesday at the age of 103. The actor, who rose to fame from performances in films like “Champion,” which earned him an Oscar nomination in 1949, was among the last living figures of Hollywood’s Golden Age.

Douglas’ son, actor Michael Douglas, shared news of his father’s passing on Instagram Wednesday afternoon. In addition to Michael Douglas, Kirk Douglas is survived by his wife of 65 years, Anne Buydens, and children, the producers Joel and Peter Douglas.

“To the world he was a legend, an actor from the golden age of movies who lived well into his golden years, a humanitarian whose commitment to justice and the causes he believed in set a standard for all of us to aspire to,” Michael Douglas wrote.

Kirk Douglas was a leading man of the 1950s with films like “Paths of Glory” and “Spartacus,” two of Stanley Kubrick’s earliest films, which Douglas produced under his Bryna Productions banner. He’s credited for helping end the Hollywood Blacklist that shut-out industry creatives accused of having Communist sympathies when he gave Hollywood Ten member and “Spartacus” screenwriter Dalton Trumbo an on-screen credit for the film. The screenwriter had previously been among those forced to work using pseudonyms.

Reflecting on his six decades in Hollywood in an interview with The Jewish Chronicle in 2012, Douglas said that’s the achievement he’s “most proud” of.

“When the film was finished I felt terrible not to give him true credit,” he said. “It was so wrong. I agonized. People said: ‘Kirk, if you use his right name you’ll never work in this town again’. But 50 years ago I was very stubborn. In the end I did it. I used his name on the screen. I was scared to death but I insisted on doing it.”

The actor earned three Best Actor Academy Award nominations. The first was in 1949 for “Champion,” Mark Robson’s noir that starred Douglas as a scene-stealing boxer who would do anything to win. In 1952 he earned a nod for “The Bad and the Beautiful,” Vincente Minnelli’s drama about a backstabbing movie producer that starred Douglas as a leading man. Another collaboration with Minnelli, 1956’s “Lust for Life,” earned Douglas a nomination for his role as Dutch painter Vincent van Gogh.

Douglas’ first film saw him star opposite Barbara Stanwyck in Lewis Milestone’s “The Strange Love of Martha Ivers.” He eventually moved into tough guy roles and became known for his intense, masculine on-screen persona, such as when he played harpooner Ned Land in Disney’s Richard Fleischer-directed adaptation of “20,000 Leagues Under the Sea,” and as an explosive defense attorney in 1961’s “Town Without Pity” and the slave-revolt leader in “Spartacus.”

Douglas, whose early career included theater work, returned to the stage in 1963 after buying the rights to Ken Kesey’s “One Flew Over the Cuckoo’s Nest.” He tried over the next decade to adapt the novel into a film to no avail, a feat Michael Douglas was able to accomplish in 1975.

In the following decades he turned to producing and directing. He starred and directed in the 1970s Westerns “Peg Leg, Musket and Sabre” and “Posse.”

Douglas’ public appearances grew fewer after he had a severe stroke in 1996 that severely impacted his ability to speak.

He was given an honorary Oscar that year for his five decades of creative and moral influence in the film industry. Steven Spielberg presented him with the award, where he referred to “The Bad and the Beautiful” as one of the best movies about movies ever made. Spielberg released the following statement Wednesday:

“Kirk retained his movie star charisma right to the end of his wonderful life and I’m honored to have been a small part of his last 45 years. I will miss his handwritten notes, letters and fatherly advice, and his wisdom and courage – even beyond such a breathtaking body of work – are enough to inspire me for the rest of mine.”

In recent years, Douglas wrote books including a 2014 book of poems “Life Could Be Verse” and blogged for HuffPost. Among his articles for the site was a retrospective look at his favorite of the 90 films he worked on.

Among them are “Lust for Life,” which he said made him never want to play another artist (“I became so immersed in his tortured life that it was hard to pull back. In makeup I looked like him, and he had been my age when he died. Sometimes I would reach my hand up to touch my ear to make sure it was still there.”) and “20,000 Leagues Under the Sea,” one of the first live-action movies made by Walt Disney, and included the song “A Whale of a Tale,” which Douglas wrote and became a song he sang with his kids.

Douglas was close with Michael Douglas’ wife, the actor Catherine Zeta-Jones, whom he gave career advice. The trio FaceTimed with each other every other night at 9:15 p.m. right up until near the end.

A representative for Michael Douglas said that he had no further statement at this time beyond the Instagram post. On her own Instagram, Catherine Zeta-Jones wrote, “To my darling Kirk, I shall love you for the rest of my life. I miss you already. Sleep tight…”

This Article is related to: Film and tagged Kirk Douglas, Michael Douglas, Obituaries