The "Call Me By Your Name" director teams up with a trio of heavy hitters for "The Staggering Girl." 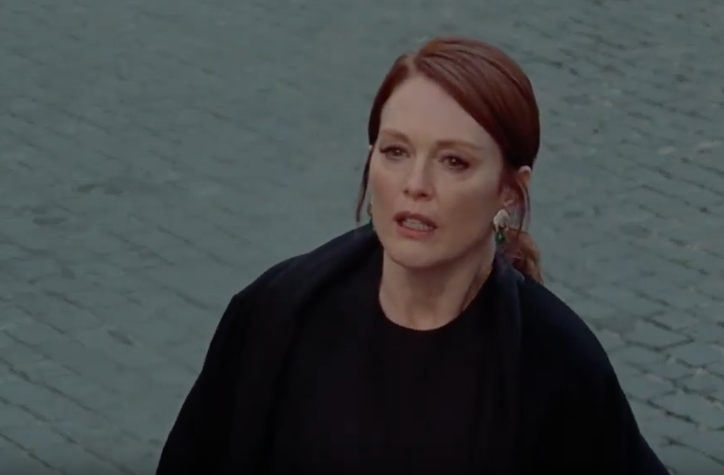 Julianne Moore in “The Staggering Girl”

MUBI has released a dazzling first trailer for Luca Guadagnino’s newest film, a mysterious short starring Julianne Moore as an impeccably dressed woman unraveling. At least, that’s the story as it appears in the trailer and first clip for “The Staggering Girl,” which will premiere on MUBI later this month. In addition to Moore, “The Staggering Girl” also features a powerhouse cast that includes Kyle MacLachlan, Mia Goth, KiKi Layne, Marthe Keller, and Alba Rohrwacher.

The official synopsis reads: “Francesca is the troubled, expatriate daughter of the acclaimed German-Roman painter Sophia Moretti, who has descended into blindness. Triggered by a stranger’s secret confession, Francesca returns to her Italian childhood home to convince her ailing mother to follow her to New York. As daughter confronts mother, ghosts of Francesca’s youth return in an onslaught of pain, memory and fulfillment.”

“The Staggering Girl” premiered at the Cannes Film Festival last year, where the 35-minute film was quickly snatched up by online film distributor MUBI. The film features a score by Oscar-winning composer Ryuichi Sakamoto. It was produced in collaboration with Valentino’s creative director Pierpaolo Piccioli, which explains the tantalizing fashion on display in these early looks.

In his Cannes review of the film, IndieWire’s David Ehrlich was not impressed by this marriage of fashion and film, writing: “As a showcase for Valentino’s Fall/Winter 2018 collection, and an excuse to drape those ravishing dresses over a small coterie of the world’s most glamorous stars, the project is nothing short of a total success. As a narrative (if non-linear) work of cinema from a filmmaker whose recent hot streak includes the searing romance of ‘Call Me by Your Name’ and the demented revisionism of ‘Suspiria,’ this feels like a pornographically fashionable indulgence — an elegant smock of half-baked ideas that’s sewn together from all of the worst criticisms that have been mistakenly leveled at Guadagnino’s previous work. Even at less than 40 minutes it feels like an enormous waste of time.”

For this visually ripe medium-length, Guadagnino worked with Thai cinematographer Sayombhu Mukdeeprom, who shot the Italian filmmaker’s last two films, “Suspiria” and “Call Me By Your Name.”

“The Staggering Girl” premieres worldwide on MUBI on February 15. Watch the trailer and first clip below.

Here’s the official clip from MUBI: