Revealing that a "dead" character is alive through marketing is a bold choice, but Netflix learned from others' mistakes and made the right call. 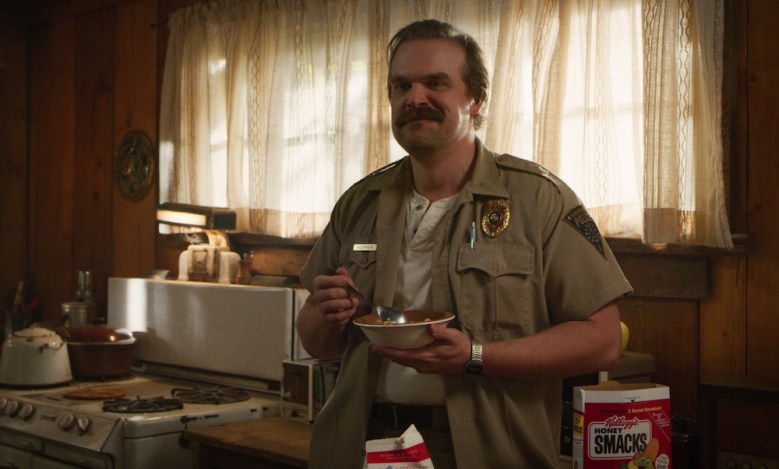 Listen, we all knew Hopper was alive. Try as they might to turn “Stranger Things'” latest ending into a cliffhanger, the Duffer Bros. tipped their hand regarding the gruff but lovable sheriff played by David Harbour. I mean, come on. The circumstances of his death were way too suspicious — No shot of the sheriff getting zapped? No body? Please. But if those context clues weren’t enough to quell fans’ tears, the finale’s mid-credits sequence referencing “the American” made sure viewers held out hope for their hero’s return.

And now it’s come. No, Netflix didn’t surprise drop “Stranger Things 4” (can you imagine?), but the streaming giant did unveil a new teaser trailer with one clear purpose: to confirm Jim Hopper’s still alive and kicking.

While “alive and hammering” would be more accurate, we’ll leave the question of what Hopper is doing in Russia up to the detectives out there. Let’s not rush past the timing and method of Hopper’s resurrection. First of all, it’s Valentine’s Day. February 14. The end of winter — which, I guess, matches the teaser’s chilly aesthetic, but why tell us about Hopper now?

The release is ostensibly pegged to the start of production on Season 4, and that’s as good a reason as any to share new photos, footage, or casting news — but the Duffers’ message and the teaser are totally geared around Hopper’s reveal. “We’re excited to officially confirm that production on ‘Stranger Things 4’ is now underway — and even more excited to announce the return of Hopper!” The Duffer Brothers said in a statement.

So why now? Basically, it had already been too long. Just look at the silly hoops David Harbour had to jump through over the last seven months. When asked if Hopper would be back, he told Entertainment Tonight, “I mean, I have no idea! I have no idea! I mean that, of course, is my hope too. It seems pretty crazy though. You know, that machine went off and blew up and Hopper seemed to be trapped there. He did glance around a little bit, but he seemed to be trapped and the machine exploded.”

No one was buying it, and worse yet, it reeked of the Jon Snow/”Game of Thrones” debacle. During the years in which HBO’s fantasy blockbuster pretended his character was dead and gone, how many times did Kit Harington have to choose between telling the truth and protecting the show? That’s not a rhetorical question. The answers are well-documented because the journey was just that stupid.

So rather than make Harbour and the rest of the cast go through a similar hell for the next only-Ted-Sarandos-knows how many months, Netflix relented. Now everyone is free to talk about “Stranger Things 4” as much as they were free to talk about previous seasons before they came out — which may be light on plot, but won’t be outright lies. Plus, Harbour is going to be making a lot of public appearances in the next few months. Marvel likely didn’t want all his “Black Widow” press interviews to be about the same “Stranger Things” question, and now he’s free to join the rest of his Netflix cast to help chase Emmys during the seven-month FYC season (that’s about to kick off later this month — yes, later this month, as in the end of February).

It’s worth noting that all of these reasons take place outside the “Stranger Things” story. They’re choices made for marketing purposes, awards purposes, and the general wellbeing of human beings like Harbour. So is it weird for a teaser trailer to be the way the world finds out about a key plot point? Does this change how viewers might absorb “Stranger Things 4”? How will the Hopper reveal play for anyone who just watches the show and doesn’t pay attention to the marketing surrounding it?

It’ll play just fine. What matters regarding Hopper’s “death” is that the other characters believe he’s dead, and that’s still true. Fans may feel cheated, talked down to, or annoyed by how hard the show committed to mourning Hopper’s death, but that’s a tonal mistake — and this announcement makes sure those feelings don’t linger. Say what you will about the fraudulent nature of the Season 3 “cliffhanger,” but you probably should have known better than to hold on — they gave us all the clues. Confirming Hopper’s survival now is like giving viewers a hand up after they’d already climbed on top of the ledge, sat down, and were taking in the view. There’s no need to hold on any longer because there was no need to hold on in the first place.

You know why? Because we all knew Hopper was alive. And if we didn’t, now we do.