"Onward" marks the first time that Pixar has turned magic effects into a character for the various spells. 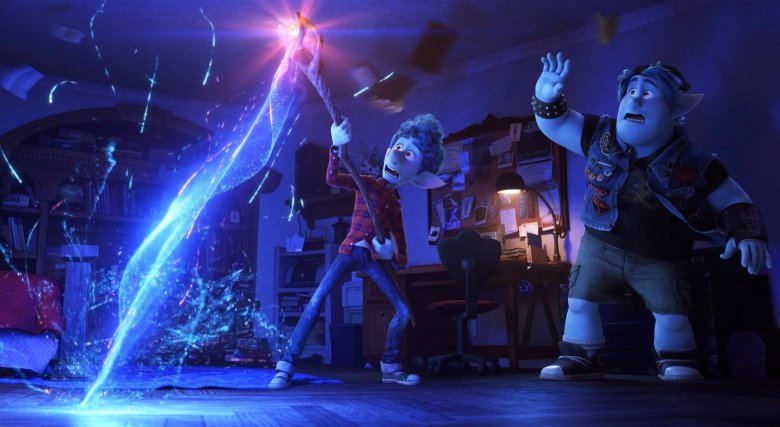 Pixar got to nerd out on fantasy and magic for the first time with “Onward” (March 6), in which two teenage Elf brothers (the MCU’s Tom Holland and Chris Pratt) try to resurrect their dad from the dead using a 24-hour magic spell. Think “The Lord of the Rings” meets “Weekend at Bernie’s,” only would-be wizard Ian (Holland), has no idea what to do, and must rely on older brother Barley (Pratt), for instructions about the rules of wizarding and how to leverage their civilization’s lost fantasy world.

First, the Pixar team formed The Fellowship group to create the rules of the magic spells, including the rhyming incantations and how they would visually look. “We had to realize something that’s abstract and personify it,” said Vincent Serritella, the effects supervisor. “We had to converge on the idea of an image of magic, go back to the base level of the sequences and the spells, and what level [of complexity] would be given, and how it affects the environment.”

Indeed, this is actually the first Pixar movie where director Dan Scanlon (“Monsters University”) got to treat effects and magic as a character. And the design of the magic was tied to chaos and how it relates to Ian and his fear of taking risks. “It feels out of control,” Scanlon said. “Ian always feels uncomfortable using it. He has to deal with the chaos of life and that was helpful to us because we could use that for all of the magic we designed.”

Serritella and his colleagues studied the use of magic in such animated classics as “Fantasia,” “Peter Pan,” “Aladdin,” and “Hercules.” What they confirmed was that each movie contained its own branded look for magic. For example, pixie dust will forever be associated with Tinker Bell from “Peter Pan.” Therefore, they needed to find their own shape language for magic that fit within the suburban fantasy world of Onward, which is populated with human-like elves, sprites, satyrs, cyclops, centaurs, gnomes, and trolls.

Fascinated by the graphic look of hand-drawn animation, the Pixar animators first experimented with 2D drawings before bringing them into 3D space. “We made shapes and graphic elements that really lend themselves to what’s happening in a 2D environment,” said Serritella. “But mixing the two together [2D and 3D] was the key. Going one way or the other didn’t work. Going too graphic didn’t fit into the world that the background and the characters were created in. And going too physical in an animated world seemed too real. We found the right balance and then took it further, turning two-dimensional graphics and shapes into light objects. And then making true volumetric, glowing atmosphere. That was new for Pixar.”

It all came together in the dazzling Visitation spell with smoke and low-frequency light waves (using the procedural Houdini software, and programming it to fit the parameters of the magic). “In conjuring dad, you see the books get pulled off the shelf, the world starts moving, and they build dad in layers,” added Serritella. But the choreography and the timing of the magic came directly from 2D. Then the CG effects and lighting provided depth perception, and a cool parallax effect where you see dad materializing in phases and rotating. It became Pixar’s version of “Fantasia.”

“Dan was always keeping a close eye on our magic not looking sci-fi,” Serritella said. “We turned back to story. Their role is to do thousands of drawings and sell an idea fast, quickly, and clear. We performed magic in a shot, the same way an animator would think about a character. We thought about Ian’s confidence level and the context to how you see dad appearing and then stopping. Camera, animation, lighting all wanted to support this idea. It was a nice [approach] for collaboration.”