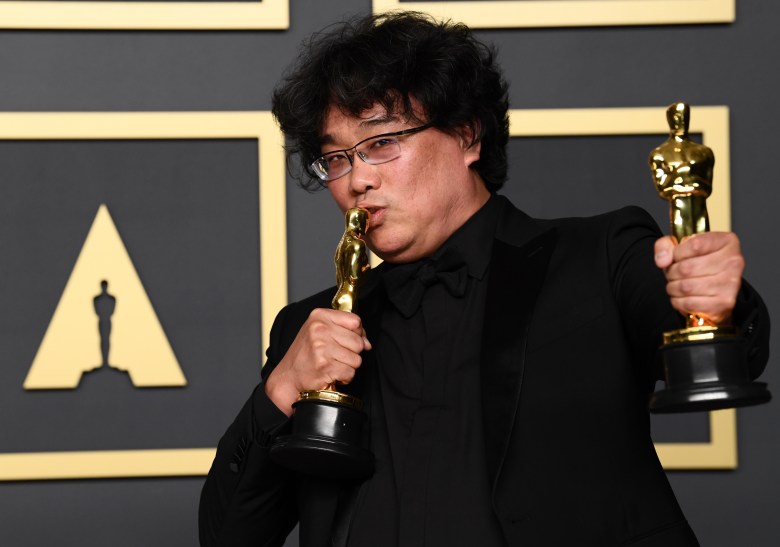 Bong Joon Ho’s genre-bender made history Sunday night when it took home four Oscars. It was the first South Korean movie to be nominated for any Oscars (it had six nods) and it was the first movie not in English to win Best Picture. Backstage, Bong reflected on why he thinks “Parasite” resonated so much with international audiences and the Academy, given the fact he’s been directing scripts he wrote from his wacky mind for two decades.

“I’m just a very strange person. I just did what I’ve always done with great artists, producer (Kwak Sin-ae), and my cowriter (Han Jin-won) and all my actors. It was the same process making this film, but we’ve had these amazing results,” he said through Sharon Choi, his translator who has been by his side throughout his time in the US promoting “Parasite.”

Bong then added himself, in English: “It’s really fucking crazy.”

But Bong then wondered aloud about why “Parasite” has resonated in a way that his previous film — the American and South Korean co-production “Okja,” some of which is in English and includes a cast of Anglophone actors like Jake Gyllenhaal and Tilda Swinton — did not.

“‘Parasite,’ which is a purely Korean film, has garnered more enthusiasm from audiences all over the world,” he said. “That’s making me think that perhaps the deeper I delve into things that are around me the broader a story can become and the more appeal it can have to an international audience.”

“Parasite” tells a story of a poor but crafty Korean family who use their wits to outsmart a rich family, by conning their way into employment at the wealthy family’s home. Those timely themes, coupled with the film’s dark humor and refusal to fit into a single genre, have been among the factors celebrated in the US.

As for what’s next for Bong, he said he needs to keep working.

“I’ve been working for the past 20 years,” he said. “Regardless of what happened at Cannes (where “Parasite” won the Palme d’Or) and the Oscars, I was working on two projects before. Nothing has changed because of these awards. One is in Korean and one is in English.”