The short, based on Jean Cocteau’s “The Human Voice,” will help the filmmaker prepare for his first English-language feature, an adaptation of "A Manual for Cleaning Women." 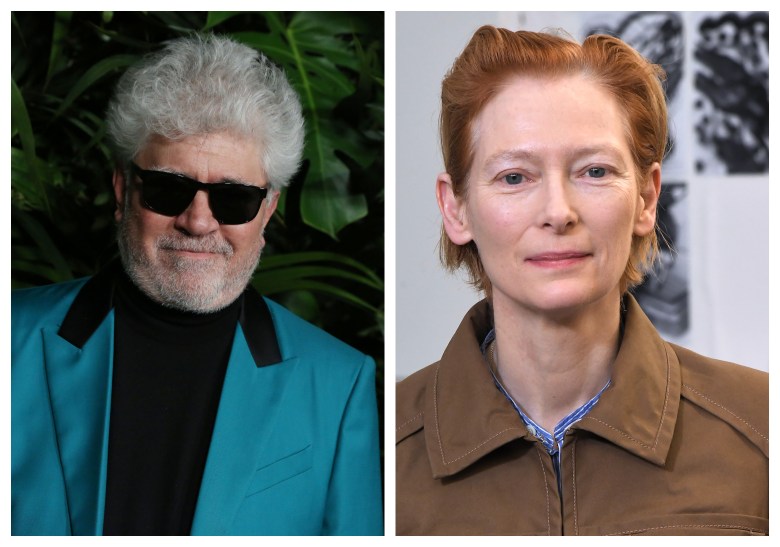 Pedro Almodóvar has spent months on the campaign trail for “Pain and Glory,” but the 70-year-old Spanish auteur is wasting no time going back to work. In an interview over the weekend, Almodóvar revealed exclusively to IndieWire his plans to direct two new projects in the months ahead — a short film starring Tilda Swinton adapted from Jean Cocteau’s one-act play “The Human Voice,” followed by a feature-length adaptation of the late American writer Lucia Berlin’s short story collection, “A Manual for Cleaning Women.”

The two projects will mark Almodóvar’s long-awaited foray into English-language filmmaking after several other attempts over the years, from an offer to direct “Sister Act” in the early nineties to his Alice Munro adaptation “Julieta,” which was originally set to start Meryl Streep before Almodóvar decided to do the project in Spanish. Sources in Almodóvar’s inner circle expressed uncertainty about the overall timeline for the two projects, but confirmed upcoming plans for the Swinton project as a means of getting the filmmaker used to the challenges of shooting in another language.

Almodóvar said he was planning to direct “The Human Voice” in Madrid this April on a soundstage with an original set. “It’s weird when friends ask me what I’d like to do next, and they’re surprised when I say that I’d really like to shoot a short, which would be like 15 minutes, not a series,” he said. “That is the story I’m really in love with now and I’m very happy to be pursuing it.”

Cocteau wrote “The Human Voice” in 1928 and first staged it in France in 1930. The play features one woman’s final phone conversation with her lover. Almodóvar has alluded to his interest in the material before, having used it as an inspiration for the scenario in his Oscar-nominated 1988 breakout “Women on the Verge of a Nervous Breakdown.” This time, however, Almodóvar said he had worked with Swinton to update aspects of the story, in which the character attempts to convince her partner not to leave her. “We worked with her to see if it would be correct for her say this or that,” he said. “I thought that there is not any kind of woman who can behave like this because it’s very old-fashioned. That mentality doesn’t exist.”

Almodóvar referred to the project, which he wrote in Spanish and had translated, as “very personal” and “a kind of visual experiment for me.” With the entire action based around Swinton’s character and her dog, it also allows the filmmaker to realize a longstanding dream of working with the actress. “You need that feeling that someone understands you completely,” he said. “In the case of Tilda, it was exactly how I dreamed of her. She’s so open, so intelligent. She gave me a lot of confidence with the logic. In the rehearsal, we understood each other very closely.”

Almodóvar expressed a desire to premiere “The Human Voice” on the fall festival circuit in time for him to dive into production on “A Manual for Cleaning Women” by the end of the year. The filmmaker said he completed his first draft of the French-backed feature in between his travels to the Toronto International Film Festival last fall and the awards trail early this year, adding that he already had two actors attached but declining to offer specifics at this time.

In an earlier interview with IndieWire last fall, Almodóvar mentioned his interest in adapting “five short tales by one American writer” that take place in Texas, Oakland, and Mexico, with a mixture of English and Spanish. That turns out to be Berlin’s collection, which he mentioned in 2016 as his new favorite read. “It’s a wonderful book,” Almodóvar said last weekend. “She’s not that different from Alice Munro. She was an alcoholic and married to a junkie. A very complicated woman.” Almodóvar rarely travels to the U.S. and had yet to sort out the geographical challenges of the shoot, which may involve substituting Spain for Mexico, but largely takes place in Oakland and San Francisco. “Of course I feel less confident with this story, but I don’t feel very scared,” Almodóvar said. “This is a real whim for me.”

He then referred to Salvador Mallo, his beleaguered alter ego in “Pain and Glory” played by Antonio Banderas. “When he says in the movie that he cannot conceive of life without making movies, it’s true,” Almodóvar said. “This is something that I feel. That doesn’t mean I need to make big movies or small movies. The main thing is that I have to think about the future, and now I have.”

This Article is related to: Film and tagged Pedro Almodóvar, Tilda Swinton