The year is 2020, and RuPaul is finally hosting “Saturday Night Live." 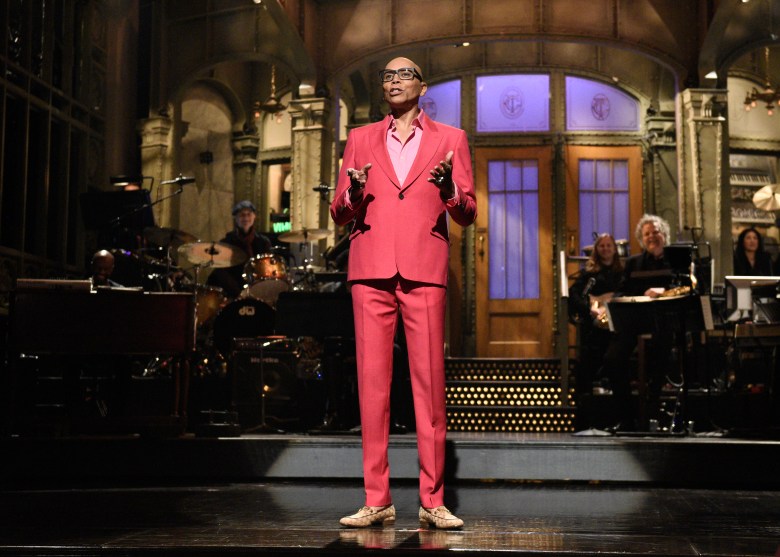 Unlike last week’s episode of “Saturday Night Live” hosted by football player J.J. Watt, this week, there isn’t exactly a one-to-one ratio between host (RuPaul) and Sunday night event (the Academy Awards). But the year is 2020, and RuPaul is finally hosting “SNL,” and that’s enough of a reason to blast “Supermodel (You Better Work)” — a RuPaul jam from 1992 — as you read this.

RuPaul has been a famous figure for nearly 30 years, but this is only his first time hosting “SNL.” As far as opening monologues go, this one isn’t all that concerned with being outright hilarious. Instead, one thing it really drives home is just how engaging of a speaker — and host, if you don’t already know that from “RuPaul’s Drag Race” — RuPaul is. It’s honestly the most effortless and assured RuPaul comes across in this episode, which usually would be a good sign, but in this case, is the top of a cliff that the episode plummets down as it progresses.

RuPaul’s greatest weakness in this episode is cue-card-reading. Yes, you’re supposed to read the cue cards in “SNL” and one of the things that upsets Lorne Michaels is trying to go off-book — but this episode saw RuPaul more concerned with getting the cue cards right than actually working the sketches to be funny.

This isn’t an insult to the sketch, but it might be time to retire Pete Davison’s Chad now. Or at least very soon. There’s really nowhere else to go with this recurring character, with this sketch serving as one more real twist on the format. The sketch also served as the most comfortable RuPaul felt in a sketch, obviously as a pre-tape without cue cards to stare down, just a sketch to act out.

“The Library” was, by far, RuPaul’s best sketch in the episode, particularly because it was the live sketch where he seemed most comfortable. The “reading”/”reading” confusion is pretty obvious as soon as RuPaul is introduced as himself, but the execution is really what makes the sketch work. Also, RuPaul was absolutely right about “Madeline”: “I have bad news, child: The Eiffel Tower is not in the woods. Girl, you betta draw France right, bitch.”

Aidy Bryant and Kate McKinnon really only do oddly specific sketches together, and this sketch just might be the height of that. Is it good? Is it bad? Yes. RuPaul honestly could’ve not been in the sketch, and it wouldn’t matter. Hopefully Rudy Giuliani either loved or hated this sketch.

First of all, Ego Nwodim, Kenan Thompson, and Chris Redd need to never stop being in sketches together. There’s always something special when it happens. Second of all, “Family Charades” starts off on a weird but funny note — with Beck Bennett’s character initiating the “high-stakes charades” concept, despite Kate McKinnon’s wife character disagreeing — before it gets into the real meat of the sketch, and it’s just one of those supposedly throwaway weird moments that ends up really setting the tone. But once we get to the meat, it’s simply hilarious. From the Johnson Family (Nwodin, Thompson, Redd, and RuPaul) simply talking throughout their entire charades round to pointing at Bennett and simply getting “12 Years a Slave” to Kyle Mooney’s quickly increasing rage over them playing the game wrong to Bennett’s “How come they just keep going?” to “Marlon Wayans’ face” — the sketch just keeps escalating until the Johnsons finally claim the $5,000 they were promised (and the house).

The only issue is RuPaul’s aforementioned cue-card reading, the one thing that kills an otherwise quick and fluid sketch.

It’s been two years since the original “Thirsty Cops” sketch, and while the original wasn’t exactly brilliant, Nwodim and Leslie Jones had a chemistry as the titular cops. That sketch still had issues in terms of pacing and flow, which is still the case here, now with RuPaul as Nwodim’s partner in thirst. It doesn’t really help that Davidson is the thirst trap either, because it’s not exactly like he can save a sketch when the rest isn’t that great; he just breaks and hopes the sketch ends soon. But “Thirsty Cops” feels like there’s really no end in sight, the whole time.

RuPaul may have gotten the iconic “the night the lights went out in Georgia” line, but with this “SNL,” Cecily Strong truly became and embodied the spirit of a Sugarbaker woman. “Designing Women” is streaming on Hulu now, so that’s really all the reason anyone has to do this sketch. (It also speaks to how RuPaul literally could’ve hosted “SNL” back when “Designing Women ” was still on the air.) Strong, of course, kills it as recurring Weekend Update feature character Cathy Anne, but channeling her inner Dixie Carter is the true source of her power in this episode.

Also, the greatest moment to come from RuPaul in this episode — outside of “The Library” — is from this sketch. His “Lock the doors!” moment, to which Chloe Fineman’s character follows through (“You’ve got it!”), is the one bit in this sketch where he truly upstages Strong.

There’s no reason for the “Boop-It” sketch to be in this episode, and it’s the one outlier of the episode — which is why it felt wrong to consider it Best Sketch of the Night — but Beck Bennett’s sad-dad, drunken spiral for this Bop-It riff is hauntingly beautiful. It’s made all the better by his initial hyper-competitiveness in “Family Charades” and his confusion throughout that whole sketch.

This episode is a case where every sketch was expertly crafted and tailored to its host, but the execution leaves so much to be desired. Truly, the most comfortable and effortless that RuPaul feels in this episode is in a pre-tape sketch — which is the case for pretty much every host, shaky or not — and “The Library.” And the latter only really works as well as it does because of the reads. RuPaul is a talented performer and entertainer, but live sketch performer is perhaps not his strength. At least, not in this format.

And not a single “Drag Race” sketch? Come on!

Jost: “And is she laughing or crying?”
Fineman: “Neither! She’s acting!”

Chloe Fineman is an “SNL” newbie who has always knocked the little that she has to do out of the park, and this episode give her a major chance to do it with a Weekend Update feature as herself. Melissa Villaseñor already tackled white male rage in her Oscar feature, so Fineman goes with a different approach, centered on the women of the Oscars and their vehicular-based acting. It’s really a good moment to show how good on an impressionist and actress Fineman is, and she knocks it out of the park. “Do you feel like you’re at home, Colin?” The knives, truly, were all out.