Harrison Ford and a hyperreal dog star in a curious Jack London adaptation spruced up with cutting-edge technology in search of a purpose. 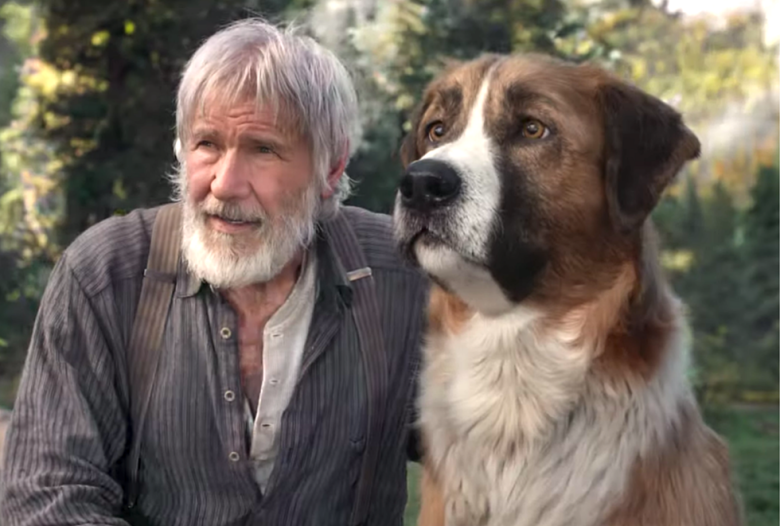 “The Call of the Wild”

Jack London’s “The Call of the Wild” is the OG of anthropomorphized adventure stories, transforming its St. Bernard-Scotch Collie mix into an engrossing protagonist without turning him into a primal cartoon. The epic 19th century tale of Buck, the domesticated pet who finds himself sold into the Yukon and battling life as a sled dog, maintains a tricky balance: Although London roots his story in the canine perspective, Buck’s back-to-nature plight is always realistic.

It’s a wonder, then, why 20th Century Fox (now Disney label 20th Century Studios) decided to adapt London’s story by turning Buck into a motion-capture monstrosity, the most prominent unnatural ingredient in a movie all about the natural world. The 2020 “Call of the Wild” isn’t all-out atrocity so much as a question mark, a formulaic adventure story spruced up with cutting-edge technology in search of a purpose.

If director Chris Sanders’ family-friendly treatment never devolves into a “Cats”-level atrocity, it’s only because Buck behaves more or less like a real dog. From the moment the hulking creature bounds onto the steps of a mansion somehow too small to hold him, computer graphics work overtime to create the impression that he’s nothing more than an eager pup who commands too much space for his own good.

The essence of London’s story remains unchanged. Stuffed into a crate and off to sea, Buck finds himself in the frosty Yukon wilderness in the midst of the gold rush, and forced into brutal training sessions with other canines as he learns the literal ropes of yanking a sled through the snow. Ace cinematographer Janusz Kaminski works wonders with the icy terrain, and Buck’s training presents some of the movie’s most engaging sequences as it propels through rapid-fire action from a dog’s point of view.

But it can’t overcome the sentimentalism of Michael Green’s script, which finds Buck first following the whims of a well-intentioned mailman (Omar Sy) before getting stuck with a more abusive taskmaster (Dan Stevens). Only the melancholic John Thornton (Harrison Ford, buried in a Rip Van Winkle beard) provides Buck with some measure of genuine companionship, as the man reveals his tragic backstory and finds a new best friend to help him explore the wilderness before them.

When “The Call of the Wild” takes the humans out of the picture, the unnatural effects prove less of a distraction. A late-night showdown between the sled dogs finds Buck reaching for pack dominance, and it’s a vivid, wordless sequence that harkens back to the 1923 silent adaptation. Similarly, Buck’s attraction to that proverbial call — and his surreal encounters with the wolves who beckon — have an ethereal quality that actually benefits from the subhuman characteristics of the motion-capture technology.

Too bad, then, that Buck doesn’t fare as well in the presence of humans. Set to John Powell’s lively but generic orchestral score, the dog’s journeys through human turf are often undercut by his all-too-human ability to interact with flesh-and-blood actors: It looks ridiculous. Ford gives a soulful performance, but his tender interactions with Buck — who engages with his master as if he comprehends every word — are so unconvincing that it’s a wonder that the studio didn’t throw in the towel and let the animal talk.

Other curious decisions percolate throughout, from Ford’s intrusive voiceover (which makes little sense by the end of the story) to a one-note villain who pops back into the picture for no other reason than to move the drama into its climax.

As CGI atrocities go, “The Call of the Wild” is less egregious than “Lion King” or Tom Hooper’s bomb, even as it sits on the same continuum. Those movies removed humans from the picture with disturbing post-apocalyptic connotations, while this one sits at the center of a human-animal conflict that no amount of technology can possibly resolve. The result is one big whiff — or is that woof? — that proves London’s storytelling talents were ahead of his time, and quite possibly this one as well.

Twentieth Century Studios releases “The Call of the Wild” in theaters on February 21, 2020.

This Article is related to: Film, Reviews and tagged Harrison Ford, Reviews, The Call of the Wild