Based on the prescient novel by Philip Roth, the six-part HBO series comes from executive producers and longtime collaborators David Simon and Ed Burns. 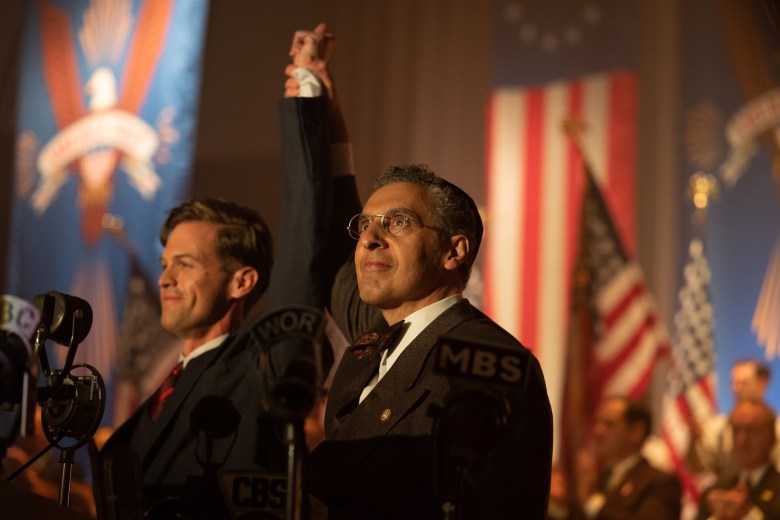 HBO has released the full official trailer for its upcoming limited series “The Plot Against America,” set to premiere this March.

Starring Zoe Kazan, Morgan Spector, Winona Ryder, and John Turturro, the six-part series comes from executive producers and longtime collaborators David Simon and Ed Burns (“The Wire,” “Generation Kill”). Based on the prescient novel by Philip Roth, “The Plot Against America” takes place in an alternate-history version of America, in which the United States turns toward fascism during the Second World War. The story is told through the eyes of a New Jersey working-class Jewish family, as aviation hero and xenophobic populist Charles Lindbergh (Ben Cole) runs for President of the United States and wins.

HBO released the teaser trailer for the limited series back at the end of January, revealing just how tense things would get in the lead-up to Lindbergh’s election. The official trailer, however, includes more about the aftermath and brazen rise of fascism and anti-Semitism within this alt-world, with young Philip Levin (Azhy Robertson) growing terrified with the inevitable possibility of fascism after learning what it means.

Like in the novel, the story follows Herman Levin (Spector) as he goes from believing that the American people will see through Lindbergh and “what he is” to quickly realizing that Lindbergh’s anti-war message is at the expense of the Jewish people. While the teaser trailer focused more on the internal struggle between the Levins and their Lindbergh-supporting family members — Elizabeth’s sister Evelyn (Ryder) and her husband, conservative Rabbi Lionel Bengelsdorf (Turturro) — this official trailer reveals more of the swift change to open anti-Semitism as a result of Lindbergh’s campaign and ultimate election. The borders are closed, the Levins are turned away from a hotel for being Jewish, Philip is plagued with nightmares of Adolf Hitler’s America.

Despite this, Evelyn — who claims Lindbergh’s not anti-Semitic, despite his anti-Semitic rhetoric — still tells her nephew, “I don’t want you to be frightened like your parents.” However, from the prevalent swastikas out in the open within the trailer to the instrumental (and sardonic) version of “America the Beautiful” that plays over the trailer, all signs point to it being perfectly reasonable to be frightened at this point. Especially as Herman attempts to fight back, saying that this is his country, only for a resigned Elizabeth tell him, “Not anymore! It is the Jew-haters’.”

While the teaser trailer danced around the fact that Lindbergh does, in fact, win the presidency in this story, the full trailer confirms that it’s unavoidable. (Philip’s reaction to the news of Lindbergh’s win: “What just happened?”)

“The Plot Against America” premieres Monday, March 16 at 9 p.m. ET on HBO. Watch the two-and-a-half-minute preview below:

This Article is related to: Television and tagged David Simon, HBO, John Turturro, The Plot Against America, Trailers