Despite an exciting story, the show still has a serious Carol problem. 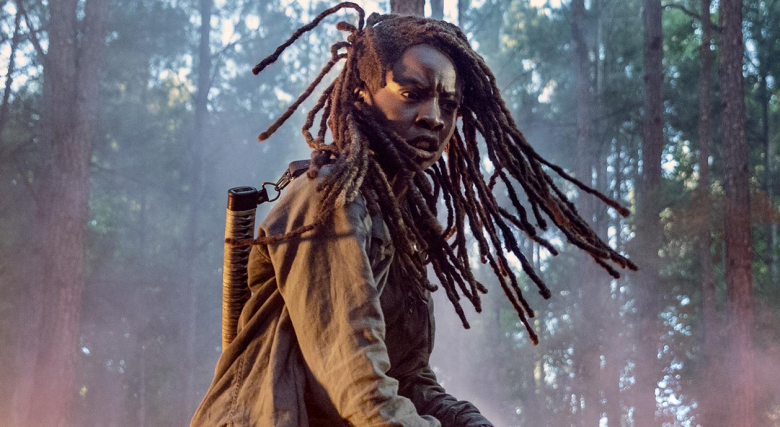 “Squeeze” is a frustrating episode. There’s a lot of good here, with an exciting, tense plot and some actual forward movement in the glacial Whisperer story, but it’s hard to give oneself over to the episode when the story hinges once again on Carol’s revenge-at-all-costs plot against Alpha. And while the consequences of Carol’s recklessness this time are finally enough to drive a wedge between her and Daryl, it’s hard to shake the feeling that the show has spent the last year severely mishandling one of its strongest characters.

But let’s first focus on what the episode does well. The cave setting is a fresh one for “The Walking Dead,” and while the various obstacles encountered — dark pits, tight spaces, and various boogeymen leaping out of the dark — aren’t anything you haven’t seen in a cave-based adventure before, they’re handled with aplomb here. Jerry’s narrow escape is a highlight, since getting slowly devoured by zombies while stuck in a narrow passage as your friends are just out of reach is a truly terrifying scenario. If it were Daryl or even Aaron in that situation, you’d have to assume they’d make it, but Jerry is low enough on the cast totem pole that it’s distinctly possible the show would kill him off here. It’s a level of suspense the show rarely manages anymore and a good feint to make it seem like the whole team will manage to escape unscathed. When things finally do go pear-shaped, it’s a genuine shock and makes for a strong cliffhanger.

The biggest complaint about “Squeeze” is that Carol and Daryl’s story beats are nearly identical to the ones they had in “The World Before,” literally the previous episode. Daryl confronts Carol about her self-destructive quest for vengeance, Carol feigns contrition (or actually means it but just can’t help herself), then she just goes and makes yet another dangerous decision. The twist this time is that her actions finally cause direct harm to others, since Connie and Magna get buried in the cave-in caused by Carol’s mishandling of the dynamite as she attempts to bury the horde. It’s good that the story is finally moving to the next level, but it’s dragged all season and Carol’s comeuppance is long overdue. It’s a testament to Melissa McBride’s performance that Carol’s final moments of the episode, as she begs Daryl to blame her for Connie’s death while he can’t even look at her, still have impact, considering how frustratingly repetitive Carol’s actions have been all season.

It’s unclear where exactly Carol goes from here, since a path to redemption isn’t particularly obvious. Daryl appears to finally be done with her and the others seem content to leave her sobbing by the rubble. Even if Connie and Magna are still alive (which at least Connie better be, since she’s the most interesting Newbie by far and it’d be a real waste to sacrifice her just so Carol can learn a lesson), it’s hard to see how Carol comes back from this. We know McBride isn’t going anywhere anytime soon, so it’s surprising the writers would give her a turn this dark and potentially isolating, especially considering how thin the top of the cast is with sturdy, beloved characters. But then last year, we also had to watch Michonne spend all season deciding not to be a bitter isolationist, so we’re not unfamiliar with this show making one of its leads unlikable for extended periods of time with little payoff. Let’s hope it’s not Daryl’s turn in Season 11.

This episode also sees some important developments at the Whisperer camp, as Negan, who knows a thing or two about being betrayed by one’s generals, correctly assesses that Gamma is the one who gave the horde’s location to the communities. Of course, that begs the question of how Alpha was able to move the entire horde into the cave system before our heroes arrived, but since the Whisperers have been borderline-magical since there were introduced, that’s a minor quibble. In return for giving her the information about Gamma, Alpha offers to have sex with Negan. He accepts in his typically smarmy Negan manner, and we get a creepy shot of their filthy, naked bodies pressed together in the middle of the woods. It’s still very likely that Negan is running some sort of scam on Alpha, but for now it’s truly a match made in gross heaven.

• A good moment for Kelly when she’s the one to make the argument that the team can’t hang around the cave hoping to dig Connie and Magna out, since the explosion will draw all sorts of unwanted attention. A difficult, pragmatic call. Carol should take notes.
• Daryl’s determined to find another way into the cave (there seem to be plenty, considering how many Whispers pop up down there), so a rescue mission seems likely.
• If Magna’s really dead, she’s provided everyone with a valuable lesson: don’t go on big missions with unfinished business with your significant other.
• Appreciate the rare moment of Negan’s bravado slipping when he assumes Alpha has led him into the woods to execute him.
• Alpha keeping her zombie mask on during sex isn’t a turn-off for Negan; quite the opposite. Of course. Like Alpha says, he’s a crass man.
• Negan still wearing his jacket even after falling into the latrine confirms that the Whisperers must all smell absolutely terrible.
• Where does Aaron keep his mace hand when he’s not using it? He must have a reinforced backpack.

This Article is related to: Television and tagged The Walking Dead, TV Reviews