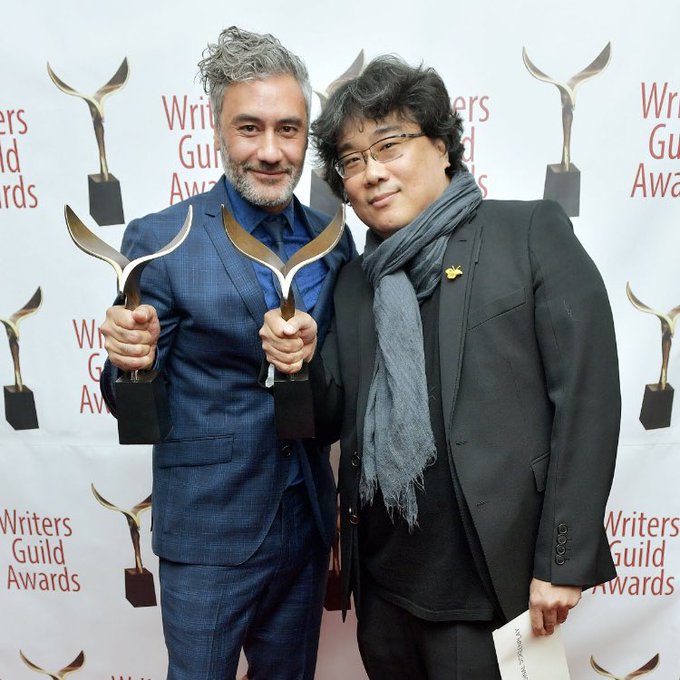 The strangely contracted award season continues to impact the weekly circuit of award shows, as the weekend before the Oscar telecast includes both Saturday’s always lengthy WGA Awards as well as Sunday’s BAFTAs. This sent most of the BAFTA nominees to the WGA Awards in New York en route to London.

This forced the WGA to announce both narrative film awards early in the evening, as “Jojo Rabbit” auteur Taika Waititi beat out Steve Zaillian for “The Irishman” as well as “Little Women” writer-director Greta Gerwig for Adapted Screenplay. Her partner, Noah Baumbach, also went home empty-handed for his Original Screenplay “Marriage Story,” losing to “Parasite.”

Oscar voters have their ballots in hand (they’re due Tuesday). For the Adapted Screenplay Oscar, it’s a close race between “Jojo Rabbit” and “Little Women,” which are both Best Picture nominees.

SAG Ensemble winner “Parasite” continued its winning streak at the WGAs, beating out DGA and PGA winner “1917,” in a category for which Quentin Tarantino’s “Once Upon a Time in Hollywood” wasn’t eligible. (Tarantino never joined the WGA.) It’s the first time an original foreign-language film has won the WGA award.

Accepting the award in New York, Bong said, “I just checked to make sure the envelopes weren’t switched.” For the Original Screenplay Oscar, at least, it’s still Tarantino vs. Bong.

And on the documentary side, even though he was nominated for two screenplays, writer/director Alex Gibney won for HBO’s “The Inventor: Out for Blood in Silicon Valley” over “Citizen K.” Neither is nominated for the Oscar.

Nancy Meyers accepted the Laurel Award for Screenwriting Achievement. She thanked studio chiefs Sherry Lansing, Amy Pascal, and Sue Kroll for backing her films — “they saw what I saw in my work, and that’s what we all need” — when “the men all passed. Women emboldened me as well as the men who said no to me. Women understood that movies with women at the center could be successful.” Her films (which total more than $1 billion worldwide) did not involve guns, dinosaurs, wizards, fast cars, space or people who fly, she pointed out.

Meyers followed with a hilarious story of a male studio exec who fell asleep during her and then-partner Charles Meyers’ pitch for rom-com “Baby Boom.” ‘No women ever did that,” she said. “Being a screenwriter has been the best job I could have ever imagined for myself. Screenwriting is an all-consuming romantic adventure, but like any romance, it can be hard and it can be painful. But when I can figure it out? It’s a thrill that cannot be matched.”

WGA president David Goodman praised the “un-conflicted” agencies that have signed with the Guild, and acknowledged that as negotiations are starting with the Alliance of Motion Picture and Television Producers, there might be a strike in the offing. “We are going into negotiations in a very strong position,” he said.