Because what else are you going to do while social distancing? 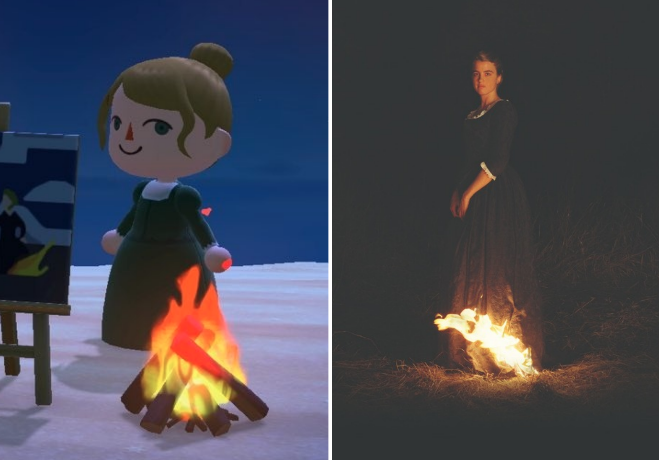 “Animal Crossing” and “Portrait of a Lady on Fire”

The latest “Animal Crossing” video game, “Animal Crossing: New Horizons,” was released March 20 for Nintendo Switch and apparently has attracted a fanbase of art house movie lovers. As Polygon’s Karen Han observed over the weekend, a handful of users are recreating popular art house titles like Robert Eggers’ “The Lighthouse” and Celine Sciamma’s “Portrait of a Lady on Fire” within the video game. Various moments from both movies are popping up on social media as cinephiles spend time social-distancing by re-staging their favorite scenes with “Animal Crossing” characters.

The “New Horizons” game includes a storyline where at some point a seagull washes up on shore. Viewers are switching the video game to its black-and-white mode, which makes the moment feel straight out of Eggers’ “The Lighthouse.” Fans are capturing stills from the game and posting them paired with “The Lighthouse” dialogue, “I seen you sparring with a gull. Best leave them be. Bad luck to kill a seabird.”

Coming soon to a Nintendo Switch near you, PORTRAIT OF A LADY ON FIRE: The Animal Crossing Cut.
Courtesy of @Xiaoyi_no pic.twitter.com/PFyf5EMqDy

I seen you sparring with a gull. Best leave them be. Bad luck to kill a seabird. #AnimalCrossing #ACNH pic.twitter.com/xAYMviQJNs

what if i recreated shots from the lighthouse in animal crossing #ACNH pic.twitter.com/1qOyTPB6Oj

This Article is related to: Film and tagged Animal Crossing, Portrait of a Lady on Fire, The Lighthouse