Unbearable tension arrives in some surprising places in this masterful display of subverted expectations. 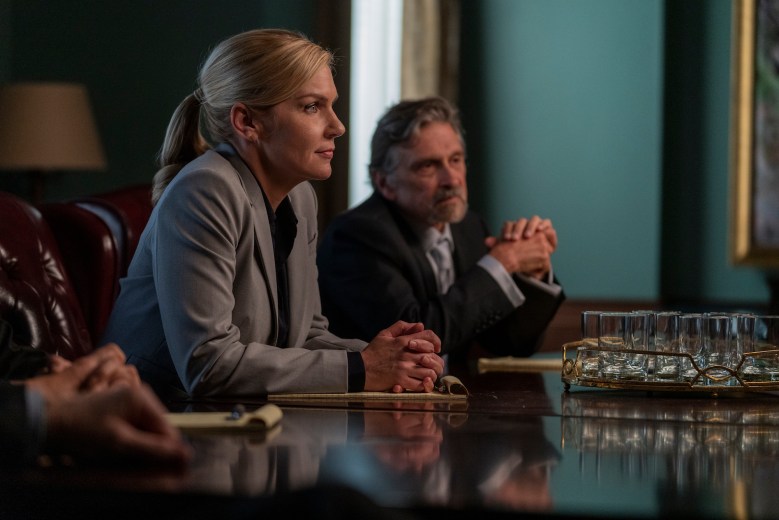 Refusing to take no for an answer is just one of the many double-edged swords on “Better Call Saul.” You could argue that the show’s existence (and frequent excellence) is a continuous rebuttal to all those who argued that the very idea of the show was a mistake. In a way, many of the characters on the show have stuck around precisely because they refuse to be bowed by whatever system is trying to restrain them.

Gus’ ongoing defiance of the Salamancas means that both his squeaky clean chicken establishment and his murky reserve remain impenetrable to outside forces. Mike trudges forward in whatever direction he can convince himself has value. Nacho continues to put his own life in peril because refusing to do so would mean the death of his father.

True to form for a show that can often make relatively inconsequential tussles feel more momentous than the literal life-and-death struggles elsewhere, “Wexler v. Goodman” kicks off the second half of Season 5 with a boardroom barnburner. Laying out nearly a half-hour of an on-screen fuse, it lights a match to watch what happens when a trio of stubborn forces meet right at the point of combustion.

Part of that groundwork comes from the semiannual appearance of the familiar UNM film student camera crew, here hired to make a series of attack ads designed to put a dent in the Mesa Verde public image. That group popping up usually coincides with Jimmy getting in touch with his inner Cassavetes, treating each low-budget production like a searing look into the human condition. It’s easy to see Auteur Mode Jimmy as another extension of his huckster instincts, but the more the show returns to it, the more it underlines exactly how he’s able to connect with wide swaths of people, clients and otherwise. His ability to persuade often comes from an abundance of empathy, not from a lack of it. 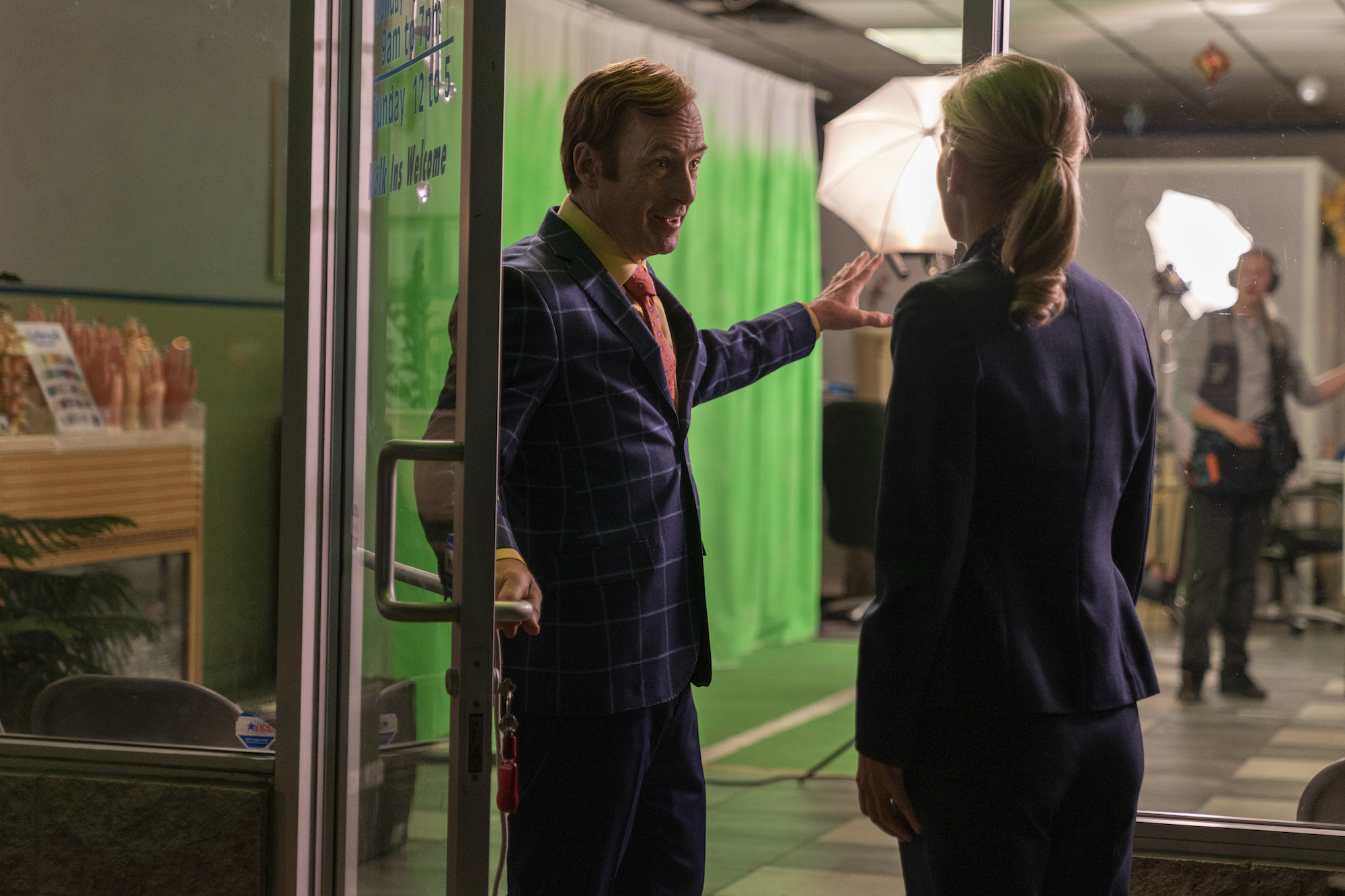 That is, as long as his intended target isn’t Howard Hamlin. Not satisfied with the bowling ball-sized holes he left in the Hamlin estate’s driveway, Jimmy adds embarrassment to injury by enlisting a pair of his satisfied customers to pay Howard an unexpected lunchtime social call. His smug reaction to watching the resultant drama unfold from the confines of his yellow Suzuki gives the episode a murky grey transition area between a well-intentioned Jimmy and a win-at-all-cost methods of Saul Goodman.

The latter emerges in the episode’s centerpiece sequence, a negotiation session to remember where writer Thomas Schnauz and director Michael Morris’ contributions both get to shine. What begins as a formality to finalize a $75,000 compensation to lone call-center holdout Everett Acker quickly balloons into a sneak attack against both the business and reputation of Mesa Verde boss Kevin Wachtell. Jimmy plays the final versions of those “produced in front of a nail salon green screen” ads on the board room DVD player in a gambit that leads Paige, Richard Schweikart, and even Kim to unleash their disappointed parent voices at the man causing all the chaos.

As Jimmy explains later, not even Kim knew about this last act of desperation, and boy does Rhea Seehorn sell that terror. When Jimmy goes off script, that is a potent mix of fury and fright in her eyes as she stares him down across the table. And it’s real anger boiling under Kevin’s outward demeanor as he corners Jimmy in the parking lot. The two settle all outstanding copyright and land use issues related to Mesa Verde’s Tucumcari expansion with a handshake agreement. (Given the way that Jimmy’s silhouetted hand stays outstretched and unanswered before that commercial break, that agreement may have been more metaphorical than literal.)

Elsewhere, if it wasn’t for knowing what potentially deadly purpose it’s serving, seeing Mike act on his newfound sense of purpose would be thrilling. (Even if it’s all part of an act to help entrap Lalo, he smiled! Sure, it was momentary and part of a Kindly Grandpa Detective facade. But it happened!) Like the Kim-centered opening, the extra 20 seconds of Mike going through the file in the car is another great example of giving the viewer just enough information. Eagle-eyed viewers will spot the victim in the homicide report as the unfortunate TransferWire employee whose only mistake was being in the proximity of Werner during the Season 4 finale domino fall of tragedies. Even if that picture and what’s on those papers is gibberish, it gives a glimpse of Mike getting back into his old habits, back before snapping miscreants’ arms was his go-to move.

Whatever his methods, it works. Persuaded by Mike (or, should we say, private investigator Dave Clark), the librarian plants the missing piece of evidence in the mind of local law enforcement. Lalo’s car gets connected to the wire transfer office killing, and Gus has the upper hand for now: By episode’s end, Lalo is apprehended by an impromptu police blockade. 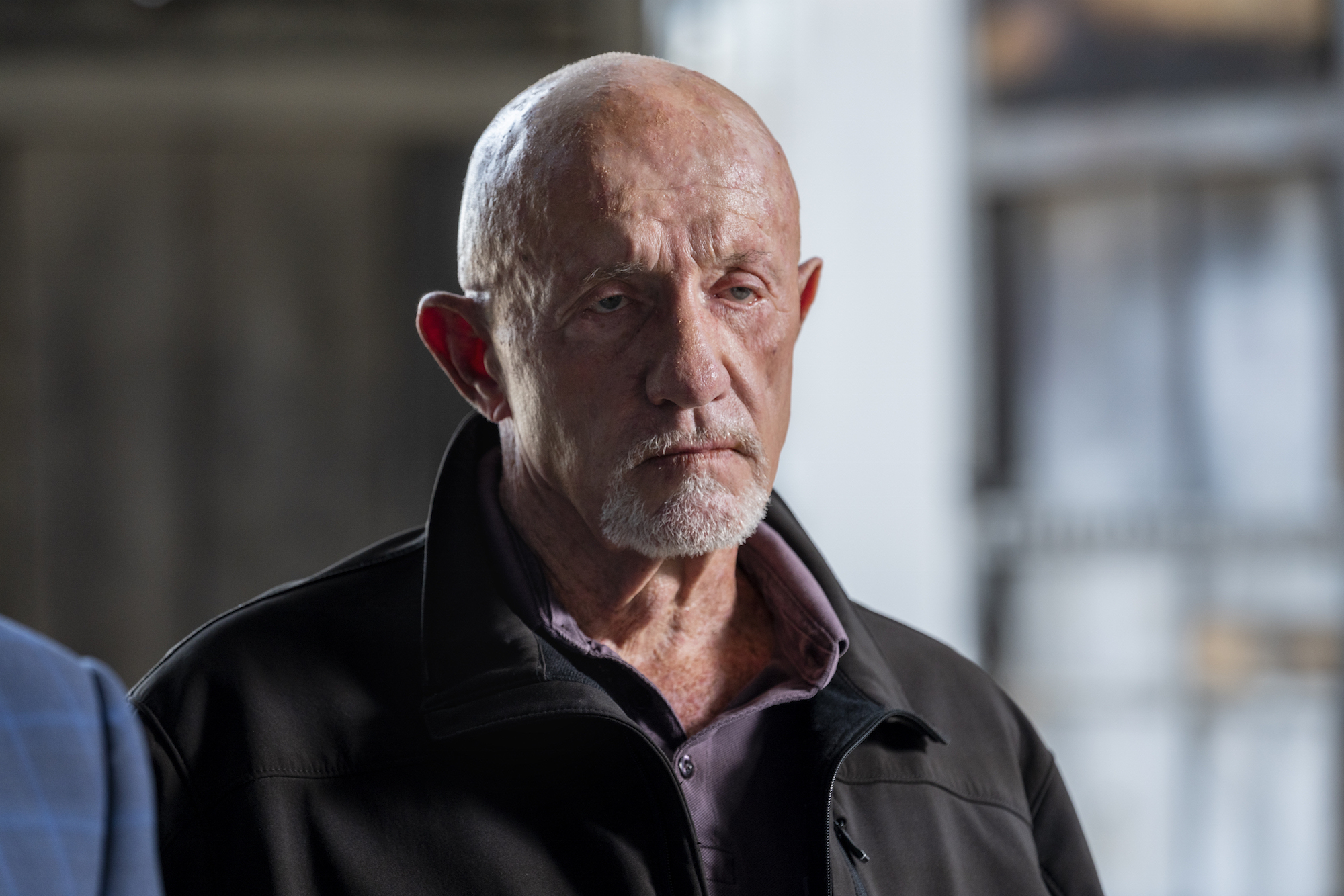 It’s worth noting that the presence of a half-dozen squad cars is the only thing that gets Lalo out of a very violent plan to say “no” to the officer that first pulled him over. That wheelwell shot of him grasping his pistol makes for a small-scale contrast to the gorgeous, cavernous warehouse framing of the Gus/Mike/Nacho meeting — one rival faction is now cramped and cornered while the other suddenly has plenty of breathing room. Playing on the audience’s sense of the rhythms of a “Better Call Saul” closer, that ground-angle shot of Lalo’s keys falling to the floor would have brought up Vince Gilligan and Peter Gould’s name against a black screen 97 times out of 100. But there’s one more wallop in store.

Even by Jimmy and Kim standards, their relationship has been especially rocky this season. The usual bouts of codependency, the wary acceptance of career choices, the nonverbal cues that swing from adorable to stabbing. Imagining the professional blowback from the boardroom pandemonium, it’s not surprising that Kim would return home in no mood for Jimmy’s carefree celebrations. It’s hard to imagine any Chinese food takeout or TCM marathon repairing the kind of misdirect she found herself on the wrong end of only hours earlier. All signs point to this being the last straw, kicking off a night of angry tears and the start of a bad breakup.

“…or maybe we get married.”

Kim and Jimmy are a couple for a reason. In the give-and-take version of their relationship, two can play the ambush game. (That last line works not only because of the surprise element, but again because of Seehorn’s delivery. She truly does not get enough credit for selling Kim’s ongoing conflicted blend of joy and misgivings when it comes to all things Jimmy.) For the same reason she agreed to initially go after Kevin, the same reason she playfully assumed false identities in pursuit of altered city proposals, and the same reason she’s turned a relative blind eye to Jimmy’s Saul-related machinations, Kim has already committed. So, why not make that official in the eyes of the law they both practice?

Whether next episode begins with a courthouse marriage or a long Jimmy walkabout wondering if it’s the right move or another flashback to their romance’s early days, all that pre-question anxiety will be true. Sure, maybe Jimmy’s given Kim enough cover with Schweikart. Maybe the new image licensing agreements and the change in call center operations will generate enough work for Kim for her to stay on the account. But a real choice is coming, and it goes far beyond just tying the knot. It’s a nervous, exciting prospect for a show that never quite seems to go according to plan.